Cadillac dominated the first two hours of the Rolex 24 at Daytona, with the #5 Action Express DPi-V.R leading the field. 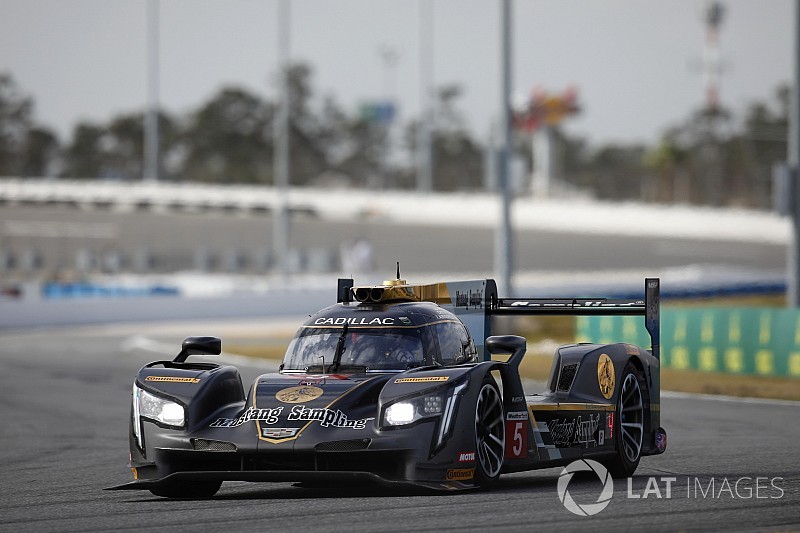 Filipe Albuquerque took the lead at the first round of pitstops after the #5 crew took fuel only, leapfrogging the pole-sitting #10 Wayne Taylor Racing Cadillac of Renger van der Zande.

Tristan Vautier briefly edged ahead just after the one-hour mark in the #90 Spirit of Daytona car, but Albuquerque retook the advantage during the second stops.

After two hours, Joao Barbosa held a lead of 20 seconds over Matt McMurry after the pair took over from Albuquerque and Vautier respectively.

Van der Zande slipped back to fifth just before the end of the first hour, but Ryan Hunter-Reay managed to claw the #10 Cadillac back to third after two hours, 10 seconds behind McMurry.

Best of the non-Cadillacs in fourth was Pipo Derani in the #22 ESM Nissan DPi, ahead of the two Team Penske Acura ARX-05s of Juan Pablo Montoya and Ricky Taylor.

The #7 Acura was in the thick of the fight with the Cadillacs early on in the hands of Helio Castroneves, but was delayed by a door coming loose, which forced an early pitstop.

Likewise, the #31 Action Express Cadillac dropped down the order after featuring towards the front in the hands of Felipe Nasr, and was seventh at the two-hour mark.

Fernando Alonso drove the opening two stints for the #23 United Autosports Ligier JS P217, working his way from 13th to 10th before handing over to Phil Hanson.

The two Joest-run Mazda DPis both suffered problems, with the #55 car shedding its front-right wheel early in the second hour and the #77 car grinding to a halt on pit road a short while later with a suspected gearbox issue.

Ford held a big lead in the GT Le Mans class, with Joey Hand nearly 30 seconds clear of the opposition in the #67 Chip Ganassi Racing-run GT.

The #3 Corvette and #911 Porsche completed the top three class, helped by a slow first stop for the #66 Ford, which had raced away from the pack in the early laps, along with the sister car.

GT Daytona was led by the #29 Land Audi of Jeffrey Schmidt, ahead of the two 3GT Lexus RCF GT3s.

Miguel Molina was in command early on in the #82 Risi Competizione Ferrari, but the car was already well down the order in the hands of Santiago Creel when the car caught fire on pit road.

Rolex 24 at Daytona gets underway