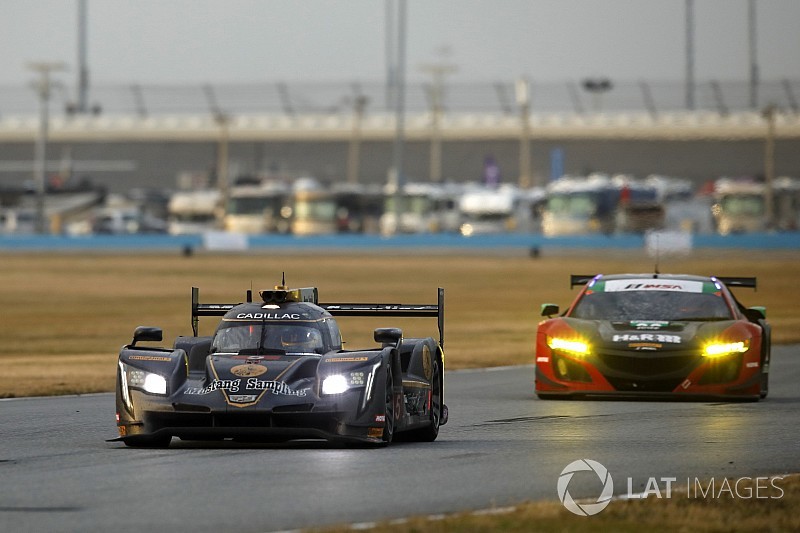 Action Express Racing held a commanding position in the Rolex 24 at Daytona at three-quarter distance, as a full-course caution closed the two lead cars together.

AXR's #5 Cadillac DPi-V.R had led by two laps from the sister #31 car, which are currently being driven respectively by Christian Fittipaldi and Mike Conway.

But the fourth yellow of the race - which came after an incident at the International Horseshoe involving Kyle Masson's #38 Oreca and Katherine Legge's #86 Acura NSX knocked debris onto the track - allowed Conway to regain a lap.

Fittipaldi went briefly behind the pitwall during the full-course yellow for a water top-up, but resumed in the lead, on the same lap as the Conway car.

Only three other cars remain within 10 laps of the lead, with the #32 United Autosports Ligier JS P217 continuing to hang on to the final podium position - despite serving a drive-through penalty for stopping in a closed pit - ahead of the #54 CORE autosport Oreca and the #78 Jackie Chan DCR car.

The #10 Wayne Taylor Racing Cadillac withdrew after sustaining yet another right-rear puncture at the start of the 17th hour, the car's seventh of the race. With no answers to the cause of the repeated issues, team boss Wayne Taylor opted to retire the car.

Also having to retire was the #55 Joest-run Mazda, which pulled off the track after setting on fire.

GTLM: Corvette back in the game

The full-course yellow allowed Corvette to close the gap on the dominant Fords in the GT Le Mans division, with the two GTs of Dirk Muller and Ryan Briscoe joined on the lead lap by the #3 C7.R driven by Mike Rockenfeller.

Corvette's #4 entry is fourth, a lap down, two laps ahead of the best of the Porsches.

The #33 Team Riley held a narrow lead in GT Daytona over the #48 Paul Miller Racing Lamborghini after staying out during the caution, with the #86 Acura still third despite its earlier dramas.