The Penske-Acura challenge to the Cadillacs in the Rolex 24 at Daytona has been hurt for a second time, as Helio Castroneves has taken the #7 car behind the pit wall for repairs. 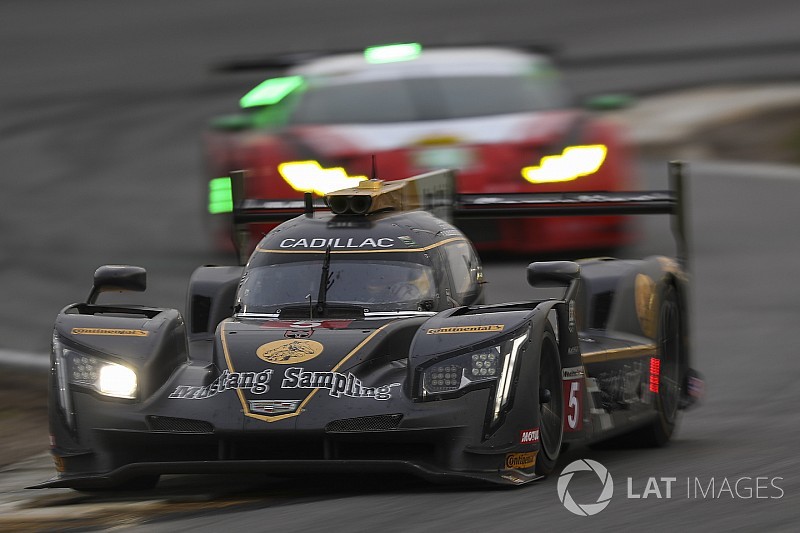 The third caution period of the race occurred when Jorg Bergmeister struck a tire wall in the #73 Park Place Motorsports Porsche 911 GT3 R, just after the 15th hour was completed. Although the car returned to the track under its own power, the full course yellow had flown.

This allowed the #7 Acura of Castroneves to close to within 10 seconds of the leading AXR car of Joao Barbosa, but 20 minutes before the end of the 16th hour, the Brazilian hit pitlane and then the garage with body repairs necessary, possibly following a collision.

This effectively ended the Penske-Acura challenge for victory as with eight hours to go, the car had fallen 14 laps off the lead. The second Action Express Racing Cadillac was a lap behind the leader.

Under the caution, the #37 Jackie Chan DC Racing was wheeled behind the pitwall to the garage due to bodywork damage while lying eighth, so the #32 United Autosports Ligier has attained a potential podium position.

Bruno Senna held down third place – four laps off the leader, Barbosa, but two laps ahead of the #54 CORE autosport entry, now piloted by Loic Duval.

Renger van der Zande has wheeled the #10 Wayne Taylor Racing Cadillac into fifth place despite the punctures and affiliated setbacks in the first half of the race, but he is being hotly pursued by Antonio Felix da Costa in the #78 Jackie Chan DC Racing Oreca.

Richard Westbrook, on resuming his stint in the #67 Ford GT, initially hit the front in GT Le Mans but has now slipped behind Sebastien Bourdais in the sister car, albeit only by half a second.

Antonio Garcia and Tommy Milner retained their positions in the Corvette C7.Rs, one lap behind, while Gianmaria Bruni was fifth in the #912 Porsche 911 RSR.

Jeroen Bleekemolen is third in the #33 Riley Mercedes AMG GT, with Frank Montecalvo in fourth driving the Scuderia Corsa Ferrari 488.