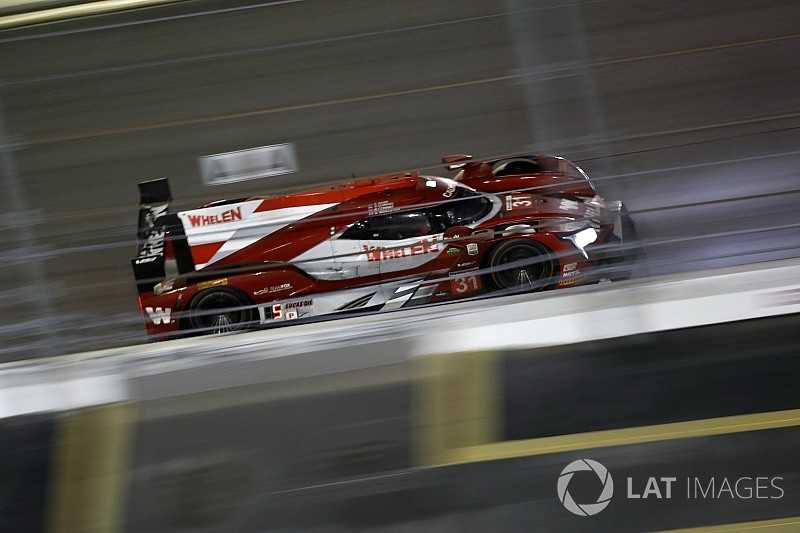 Action Express Racing’s Cadillacs are looking strong at the front in Daytona, as Penske’s challenge has been halved by a mechanical failure for the Juan Pablo Montoya/Dane Cameron/Simon Pagenaud Acura.

Eric Curran performed well in the #31 AXR Cadillac DPi-V.R to allow partner Mike Conway’s triple-stinting effort to pay off, and he led teammate Filipe Albuquerque by six seconds as the 14th hour ended.

Helio Castroneves is 11 seconds off the lead in the #7 Penske-run Acura ARX-05, after a strong stint by Graham Rahal, but the sister car had slipped 20 laps down at the end of Hour 14 after encountering an alternator failure.

That has allowed United Autosports’ #32 entry into fourth, with Paul di Resta at the wheel, albeit three laps off the lead fight.

Both Felix Rosenqvist and Ho-Pin Tung have encountered punctures in their Jackie Chan DC Racing Orecas but the #37 and #78 cars have resumed with Lance Stroll and Ferdinand Habsburg in the cockpits, and they’re running fifth and eighth respectively.

Jon Bennett has the CORE autosport Oreca running in sixth, three laps behind Stroll but two ahead of the recovering Wayne Taylor Racing Cadillac in seventh.

Pipo Derani had to retire the #22 ESM Nissan DPi from a comfortable fifth place after a blown turbo.

IndyCar aces Sebastien Bourdais and Scott Dixon are running a few car lengths apart, still keeping Chip Ganassi’s Ford GTs at the head of the GT Le Mans field by a one-lap margin over Jan Magnussen in the #3 Corvette C7.R and Oliver Gavin in the #4 ’Vette.

Earl Bamber is at the wheel of the #912 Porsche but almost a minute behind Gavin, while the BMW M8 of Jesse Krohn presses on, but six laps off the class lead.

Trent Hindman has the Michael Shank Acura NSX in third ahead of the Spirit of Race Ferrari 488, with Pedro Lamy at the wheel.