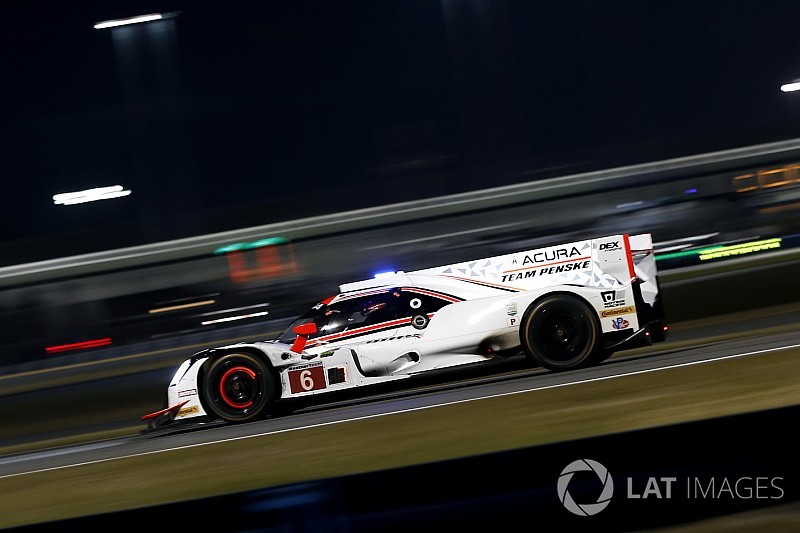 Simon Pagenaud took the lead from Penske Acura teammate Graham Rahal at the start of the 400th lap of the Rolex 24 at Daytona, as the American spun at Turn 1, but Action Express has now hit the front once more.

Rahal and Pagenaud had reasserted themselves in a Penske 1-2 formation despite Action Express Racing’s Cadillacs moving to the front following a restart.

Slick pitstops for Rahal and Pagenaud, and an AXR delay as Christian Fittipaldi replaced Joao Barbosa in the #5 car, had allowed Rahal to eke out a five-second advantage over Pagenaud who in turn had three seconds over the chasing Cadillacs.

However, Rahal’s unassisted spin at Turn 1 dropped him 16s off the lead as the race reached its halfway point, with Pagenaud holding a four second advantage over Fittipaldi and five over Conway in the #31. Following stops that saw Pagenaud hand off to Dane Cameron, Conway has taken the lead.

Pipo Derani is fifth in the #22 ESM Nissan but two laps off the frontrunners, with Felix Rosenqvist 80s behind in the Jackie Chan DC Racing Oreca, and Paul di Resta a mere 7.5s behind that in the United Autosports Ligier.

The second United car of Fernando Alonso, Lando Norris and Phil Hanson, which was delayed by a major brake issue remains 26 laps from the lead.

Dirk Muller and Ryan Briscoe have the #66 and #67 Fords running in tight formation at the head of the GT Le Mans field, a second apart, and a full lap ahead of Mike Rockenfeller in the #3 Corvette - which is almost a lap ahead of the sister car, currently piloted by Marcel Fassler.

The #4 Corvette is around half a minute ahead of the #912 Porsche of Laurens Vanthoor, while Augusto Farfus has the #24 BMW M8 into sixth in class on its IMSA debut, albeit five laps behind the Fords.

Alonso after brake issues: “We will try our best until the last lap”