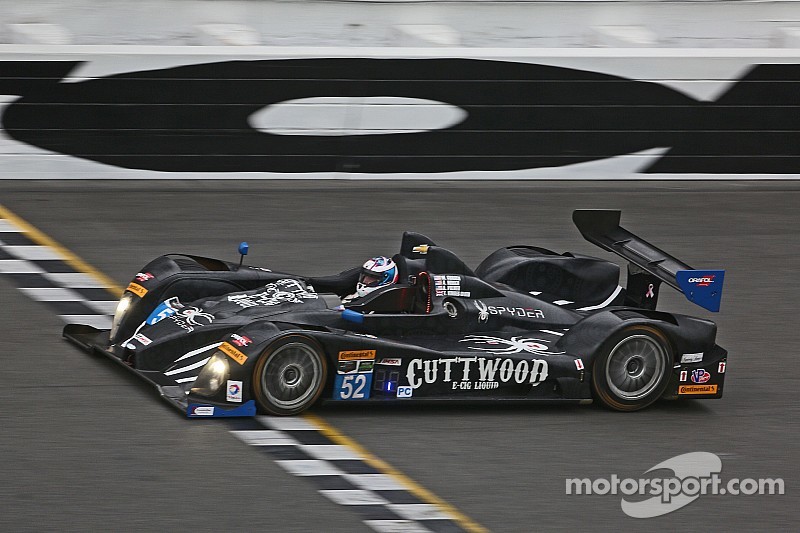 Daytona Beach, Fla - The CORE Autosport crew of Jon Bennett, Colin Braun, Mark Wilkins and James Gue was robbed of a repeat Prototype Challenge class success in the Rolex 24 at Daytona, leading for the majority of the event until a late fiery crash in the last 20 minutes handed victory to the PR1/Mathiasen Motorsports squad.

The ORECA-Chevrolet single-make class swung in the very final moments, and it was the PR1/Mathiasen squad of Mike Guasch, Andrew Novich, Andrew Palmer and Tom Kimber-Smith that came through to claim victory.

The last 11 hours of the race we'd lost the power steering and were fighting the car all the way.

Kimber-Smith was actually the race’s first spinner when he was tagged around by a PC rival in the infield section on the opening lap. Despite losing the car's power steering in the darkness, they bounced back for a remarkable late victory.

From spinning to winning

"It was definitely an up and down weekend, we lost five laps, clawed our way back, then lost another five laps[with an oil line breakage]," said Palmer. "I hope everyone at CORE Autosport is alright, but a win’s a win and we’re happy.”

Kimber-Smith said: "For the last 11 hours of the race we'd lost the power steering and were fighting the car all the way. We were so unlucky at the start of the race, and at the end, it's not nice to see a car go out like that on fire, but I'll take the win. It's brilliant."

Gauch added: "We were the underdogs, right from the back from the very beginning. We got less unlucky than others, so we'll take it whenever we can get it."

Braun's race goes up in flames

Braun was unhurt in the crash, and neither he or his team-mates could believe what had happened.

“We were trying to maintain the gap to Tom, there was a slower DP car ahead of me, off the pace through the kink, I went by on the inside, outside for Turn 5, I turned in, he pretty much squared me up in the right-rear," explained Braun. "I got it back going, to limp back to the pits, then the suspension collapsed on the exit of the Bus Stop.

"Just gutted for the guys. We played the strategy really well. I made that move 150 times during the race, and I just got crashed out by a different class of car. Wrong place, wrong time.”

Bennett said: "We did 23hrs and 40m successfully. But we'll regroup and we'll be back. Super proud of our effort and we'll be back. I think we had a small contact with another car. We had a tyre going down, and we were trying to get back. That's racing, everything is a split-second decision."

Gue added: "We were cruising, just had to make our final stop for a splash. Just bitterly disappointed, for this to happen with just 20 minutes to the end, I'm so sorry for the guys."

The BAR1 Motorsports car suffered a couple of spins, including one from team owner Brian Alder on Sunday morning, which had started on the class pole thanks to Johnny Mowlem. The car also ran into some costly technical issues, but battled back to second in class, a lap down on the PR1/Mathiasen car.