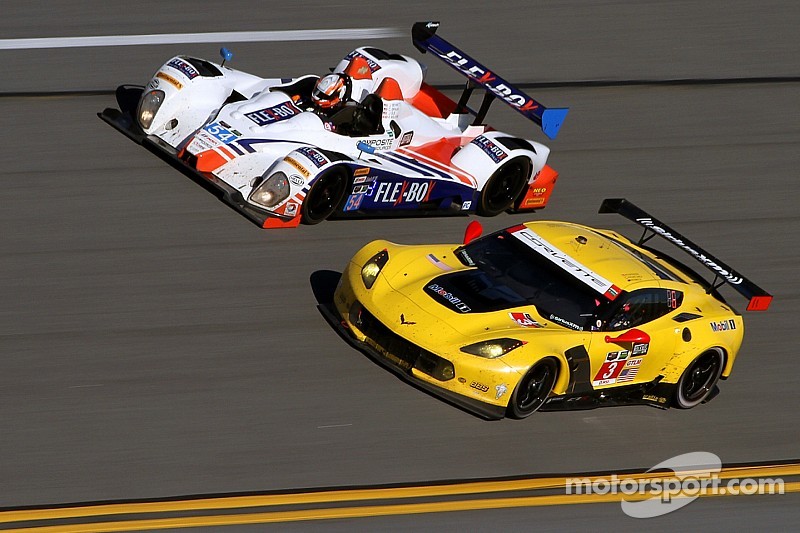 The sprint to the checkered flag is on.

Daytona Beach, Fla - The 14th caution of the race came when the No. 33 Viper SRT, a dominant GTD car stopped on track. At the the same time, CORE Autosport cut down a left rear while leading the PC class. 17 laps later, the Viper returned but no longer in contention.

The troubles continue for the Michael Shank Racing, who went for a minor spin with John Pew behind the wheel. The 15th caution was for oil on the track, coming from the No. 17 Team Falken Tire Porsche, which retired from the race.

On the ensuing restart, the No. 4 Corvette lost the GTLM lead after damaging the nose and getting a tire rub. The No. 25 BMW took over, only to have its pilot Bruno Spengler blow the chicane and go tearing through the grass.

The No. 58 Wright Motorsports Porsche then made contact with the turn four tires, Patrick Dempsey driving. The popular Spongebob PC spun and after a few tense moments, pulled itself from the grass while running third in class.

The 16th full-course caution was needed when the No. 44 Magnus Racing Porsche dropped oil, causing the No. 64 Scuderia Ferrari to crash. The team later discovered a dead possum inside the car, which Andy Lally had apparently hit hours earlier.

Just before the end of the hour, we had our 17th full-course yellow when the No. 009 TRG-AMR limped to a stop. The No. 11 RSR PC Oreca and No. 73 GTD Porsche have also retired from the race.

While leading the GTLM class, the No. Corvette hit trouble for a third time! The No. 66 DP slowed and the Corvette ran into the back of it, tearing the right front fender away.