Ex-Formula 1 driver Felipe Nasr set the pace in the qualifying session for the Rolex 24 Hours at Daytona that dictates the allocation of pitboxes and garages for race weekend. 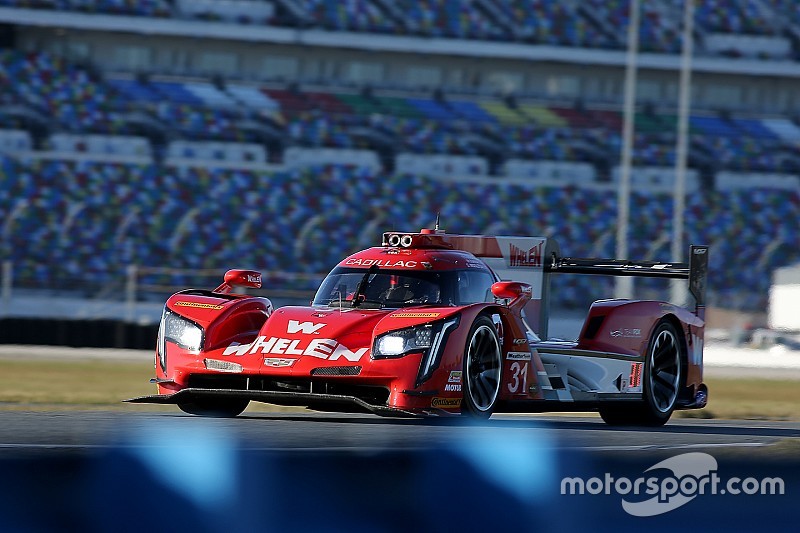 The session has no impact on the grid for the Daytona 24 Hours, which takes place on January 27-28, but can be regarded as a good indicator regarding one-lap pace for qualifying proper.

And in that case, the Cadillac DPi-V.Rs are looking very strong, having swept the top four positions in this early-afternoon session. Nasr led in the #31 Action Express entry, securing top spot with a lap of 1m35.806s posted in the final seconds, setting the first sub-1m36s lap of the test.

That put him 0.231s clear of Tristan Vautier in the #90 Spirit of Daytona Cadillac, while Filipe Albuquerque was third in the #5 AXR car, ahead   of Renger van der Zande’s best in the #10 Wayne Taylor Racing entry, 0.675s off the pace.

The two Penske Acuras were best of the rest in fifth and sixth places, with Dane Cameron ahead of Ricky Taylor, while Pipo Derani was the best of the Nissan DPis in seventh place, 1.439s down. Mazda Team Joest’s Harry Tincknell was eighth.

The best of the Orecas was Alex Brundle in ninth place, just ahead of the Miller Motorsports entry of Simon Trummer – with 1.517s covering the top 10.

Alonso was 12th fastest of the 20 prototypes in the United Autosports Ligier JS P217 with a lap of 1m37.515s – the quickest set by that car so far this weekend.

That relegated his teammate Ryan Briscoe to second, although Oliver Gavin subsequently split the two Fords in the #4 Chevrolet Corvette C7.R with a time just 0.030s slower than Hand’s best. Briscoe did subsequently improve his time to a 1m43.766s, but it was not enough to get back ahead of Gavin.

In the final minute, Earl Bamber put the #912 Porsche fourth, 0.278s down, and ahead of the second Corvette of Antonio Garcia.

Alessandro Pier Guidi was sixth in the Risi Competizione Ferrari 488 GTE, with the two new BMW M8s of Alexander Sims and John Edwards seventh and eighth.

Mirko Bortolotti was fastest in GTD qualifying, setting a best time of 1m47.374s in the #11 Grasser Lamborghini Huracan and coming close to improving on that, after stronger first and second sectors on his next quick lap but ending up 0.02sec slower.

His earlier lap was quick enough to beat Andy Lally in the Magnus Racing Audi R8 LMS to second place by 0.062s. Behind them, Pat Long improved on his final lap to a 1m47.481s in the #58 Wright Motorsports Porsche to make sure of third place.

Alvaro Parente was fourth fastest in the #86 Michael Shank Racing Acura NSX, ahead of Ryan Eversley in the HART-run version.

It was a tight session for GTD, with just one second covering first place down to 18th-placed Jens Klingmann’s Turner Motorsport BMW M6.