On a dry track, but with rain showers looming in the vicinity, Albuquerque (Wayne Taylor Racing Acura ARX-05) led from pole ahead of Alex Lynn’s Chip Ganassi Racing Cadillac.

Richard Westbrook’s JDC-Miller Cadillac grabbed third initially from Tom Blomqvist (Meyer Shank Racing Acura), who lost a further spot when Sebastien Bourdais bullied his way past in the #01 CGR Caddy. The Frenchman then pulled another forceful move on Westbrook to take third on Lap 2 and switched places with Lynn for second after 20 minutes of racing.

Under the first full-course yellow, due to a hapless LMP2 spin, the rain intensified but not enough for the majority of the DPi class to change to wets – apart from Westbrook, who’d told his team if they saw more rain on the radar they should switch.

A struggling MSR took advantage of the yellow to make big setup changes to its Acura, and switched in Oliver Jarvis for good measure, while leaders WTR also made a driver change with Ricky Taylor in for Albuquerque.

Bourdais blew past Taylor at the restart, with Westbrook following suit and then snatching the lead from Bourdais moments later as Pipo Derani (who took over from Pla) suffered a quick spin.

Wet-shod LMP2s then worked their way past the slick-shod, non-Westbrook DPis – with Louis Deletraz and Juan Pablo Montoya running second and third overall.

Van der Zande passed Jarvis for second before another yellow, caused by JDC Miller’s LMP3 entry losing a chunk of bodywork, completely wiping out Westbrook’s massive lead in its sister DPi car. Under this caution, Westie handed over to Tristan Vautier, as all cars switched back from wets to scuffed slicks as the rain ceased.

The race restarted in the order of Vautier, van der Zande, Jarvis, Albuquerque and Earl Bamber (in for Lynn) – with the interloping LMP2s shuffled back in the pitstop sequence. Derani’s chances were wrecked when he went off trying to regain track position on the wave-by.

Vautier had a moment on the exit of Canada Corner but just fended off van der Zande for the lead, while moments later Albuquerque passed title rival Jarvis in a wild three-wide moment with Bamber to grab third.

During the penultimate yellow, for some LMP3 shenanigans at the penultimate corner, Jarvis grabbed the lead off pitlane from Albuquerque as the Acuras took less fuel than the Cadillacs. As they fought out the battle for victory, Vautier tussled with van der Zande and Bamber.

Going into the final 30 minutes, Albuquerque attacked Jarvis at Turn 1 but ran way wide on the exit. He bided his time until Jarvis got boxed in by GT traffic at Turn 6, and surged ahead – even with two wheels on the grass – to extend WTR’s winning streak.

The Vautier/van der Zande battle exploded as they clashed at Canada Corner, allowing Bamber to jump ahead of both of them for third.

Inside the final 10 minutes, Jarvis caught Albuquerque in traffic but ended up having to defend from Bamber. In his attempt to keep him behind, he ran wide at The Kink and slammed into the concrete wall on the inside. Amazingly, he was able to continue despite leaving most of his nose section scattered across the track, which caused the final yellow of the race – under which the event finished.

Albuquerque won from Bamber, van der Zande and the limping Jarvis – who was fortunate to finish at all, given that he had a punctured right-front tire. It means Albuquerque/Taylor move 19 points ahead of Jarvis/Blomqvist going into the final round of Petit Le Mans.

In LMP2, Ryan Dalziel (sharing with Dwight Merriman at Era Motorsport) won a tense nose-to-tail battle with Deletraz (partnered by John Farano at Tower Motorsports), the two making contact on the approach to Canada Corner as Dalziel forced his way through in the final stages. 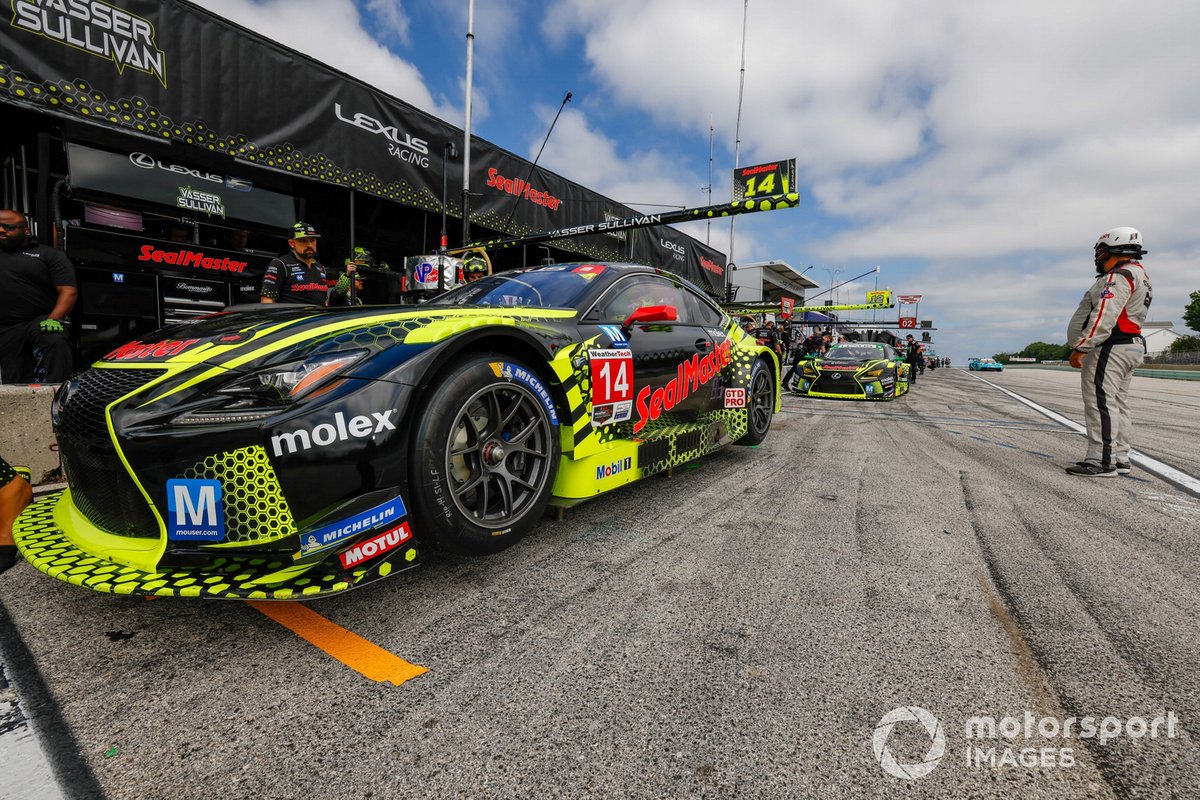 After the first yellow, when the field changed from slicks to wets, Jordan Taylor’s Chevrolet Corvette C8.R hit the front with a shorter fuel fill, but Ben Barnicoat (in for Hawksworth) and Mathieu Jaminet (in for Campbell) quickly pushed the ‘Vette back to third.

Barnicoat overshot Turn 5 just after the hour mark, handing the lead to Jaminet. But he managed to wrest the lead back going into the final hour to win the race for Lexus ahead of the 911.

They spent much of the race barely half a second apart, with Antonio Garcia bringing home the Corvette in third.

The WeatherTech Mercedes was in the mix for GTD honors, but Daniel Juncadella jumped a red light in his final pitstop, earning him a stop/go penalty.