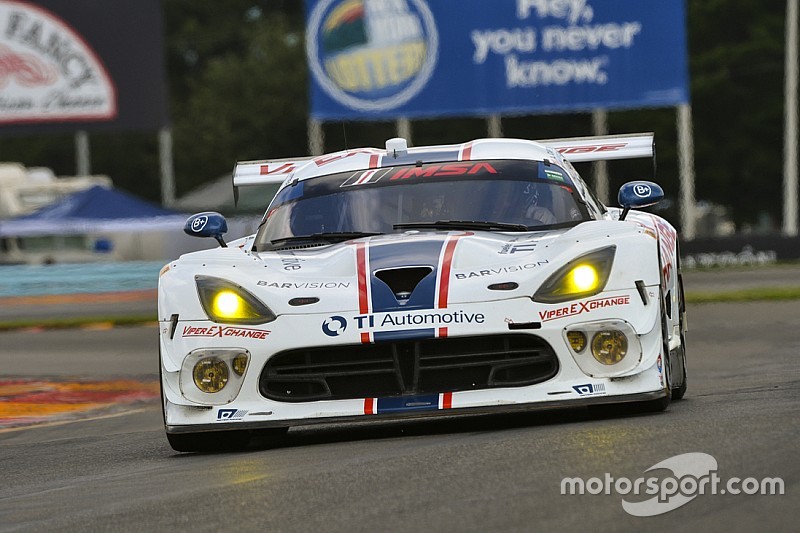 Ben Keating and Jeroen Bleekemolen determined for success in No. 33 Dodge Viper GT3-R in second half of IMSA TUDOR Championship Season.

LAKEVILLE, Connecticut – The Dodge Viper GT3-R will make its Lime Rock Park debut this weekend in the Northeast Grand Prix where co-drivers Ben Keating and Jeroen Bleekemolen will be looking for their first IMSA TUDOR United SportsCar Championship GT Daytona (GTD) win of the season in the No. 33 ViperExchange.com/Riley Motorsports Viper GT3-R.

Lime Rock was not on the inaugural IMSA TUDOR Championship schedule in 2014 but the Northeast Grand Prix returns this year as a headline event for the GTD and Prototype Challenge (PC) classes.

In an IMSA American Le Mans Series race, I had a PC car run me off track acting like I wasn't even there,

The two-hour and 40-minute race takes the green flag this Saturday, July 25, at 3:15 p.m. EDT. IMSA.com and the IMSA app will stream in-car cameras, live timing and scoring and IMSA Radio’s play-by-play throughout the race. Full race coverage will air the next day on FOX Sports 1, Sunday, July 26, from 5 - 7:30 p.m. EDT.

Round 6 of 10 races on the 2015 GTD schedule, Lime Rock is a 1.5-mile road course with just seven turns. It is the shortest track on the IMSA TUDOR Championship calendar but always delivers big excitement.

“To me, Lime Rock is like NASCAR’s Bristol of sports car racing,” Keating said. “If you make any mistake, then it is very easy to go down a lap to the field. It’s the shortest track we race on, which means top speed is not as important, so Lime Rock should suit the Viper very well. The Viper handles well and brakes well, so I am looking forward to a strong race.”

Keating and Bleekemolen came on strong in the second half of last season, winning two races in what was the debut year of competition for the Viper GT3-R.

“I know the team can provide us once again with a strong car,” Bleekemolen said. “We have been quite unlucky this season with the No. 33, so hopefully everything works out as we begin the final part of the schedule. I like Lime Rock. The only problem in the past was traffic as it’s such a short lap, but with only PC and GTD out there it should be better.”

Even with just two classes, competition is always in close quarters at Lime Rock. The PC class cars are expected to be slightly quicker than the production-based machines of the GTD division.

“In an IMSA American Le Mans Series race, I had a PC car run me off track acting like I wasn't even there,” Keating said. “It is a hard track to pass on, and the other classes get very aggressive. It’s hard to have patience at Lime Rock. Because of this, the faster classes make me a little nervous.”

The competition within the GTD class is another primary focus of the ViperExchange.com team.

“I think some other GTD cars will be strong at Lime Rock,” Bleekemolen said. “It will be close again for sure, but if we can get the maximum out of the car, we should look for a strong result again. With the competition being so close, it’s all about making no mistakes and getting the best possible set up.”

A two-day event, the IMSA TUDOR Championship schedule gets underway tomorrow, Friday, July 24, with opening practice at 11:35 a.m. EDT. Qualifying begins later that afternoon at 5:15 p.m. EDT and airs live on IMSA.com and the IMSA App. Race-day Saturday starts with a 15-minute warm-up at 11:25 a.m. EDT before the 3:15 p.m. EDT start time for the 2-hour and 40-minute Northeast Grand Prix.

• Keating and the Riley Motorsports team come to Lime Rock one week after winning the Tire Rack Ultimate Track Car Challenge presented by Grassroots Motorsports last Friday, July 17, at Virginia International Raceway for the second-consecutive year. The No. 33 Viper GT3-R once again topped all comers in the open competition, best-single lap event. “It’s just incredible to win the Ultimate Track Car Challenge for the second year in a row,” Keating said. “We took out the restrictor, added a bunch of downforce, added traction control, and ran flat out. Any time you get to do this, it’s a total blast. A 1:46.4 lap at VIR is hauling the mail.”

• Racing what he sells, Keating is the principal of ViperExchange.com, which is the world’s largest Viper retailer, based out of Tomball, Texas. He and his associates maintain close ties with Viper enthusiasts around the world, including a particularly passionate group headed to Lime Rock this weekend. “Because The Northeast Viper Club is so strong, they were able to put together a special Viper Corral Experience on their own by working with the track, which is pretty exciting,” Keating said. “It’s really awesome and I hope to enjoy lots of time with them this weekend.”

• A sought-after talent in international sports car racing competition, Bleekemolen is usually competing every weekend somewhere around the globe, but this weekend is only his third race at Lime Rock. “I have actually only raced twice at Lime Rock,” Bleekemolen said. “I didn’t get a win yet at Lime Rock, second is my best so far, it would be pretty cool to get a win there.”

• Even as the shortest track on the tour, Lime Rock packs a lot excitement for competitors and even has a few different configurations. “I personally preferred Lime Rock when we ran the hill and jump on the back straightaway,” Keating said. “This made for more exciting racing. Still, whether coming down the hill at the last corner, or braking deep for Turn 1, there are many exciting elements to Lime Rock.”