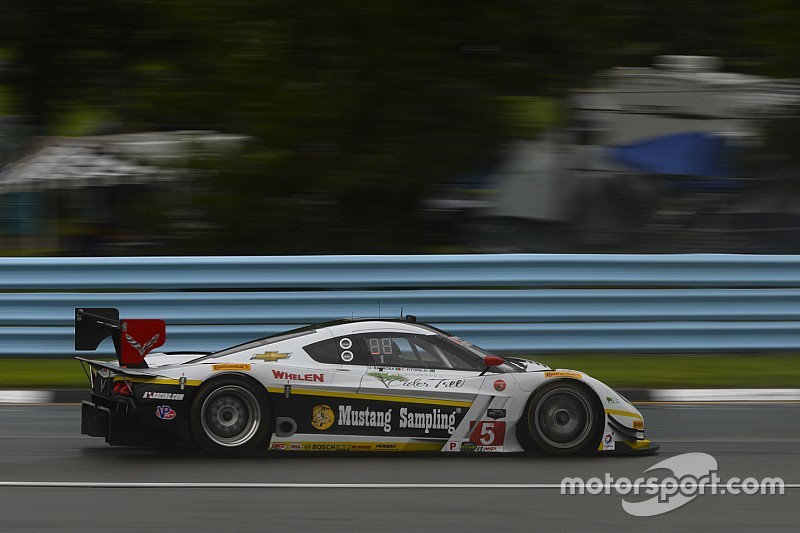 No. 60 Michael Shank Racing team fastest in practice but will start sixth.

WATKINS GLEN, N.Y. – Qualifying for the TUDOR United SportsCar Championship Sahlen’s Six Hours of The Glen was cancelled Saturday afternoon because of wet conditions. In fact, after the IMSA Continental Tire 150 concluded under caution about 3 p.m., all on-track activity for the rest of Saturday was cancelled, including a Lamborghini Blancpain Super Trofeo race, and a Porsche GT3 Cup Challenge race.

So the lineup for Saturday’s TUDOR Challenge race will be set by points, which was a major disappointment to the Honda-powered No. 60 Michel Shank Racing with Curb/Agajanian Ligier JS P2. The team had practiced at Watkins Glen in preparation for the race, and it showed in practice, when driver Ozz Negri was the fastest overall.

So instead of having a shot at the pole, the Shank team of Negri and John Pew will start sixth. One the pole is the points leader, the No. 5 Action Express Mustang Sampling Chevrolet Corvette DP of Christian Fittipaldi and Joao Barbosa.

But even Negri backed IMSA’s call to cancel qualifying. “I agree with the decision,” he said. “It would not have been good.” He is, at least, looking forward to the race, which may also be run under wet conditions, judging from the forecast.

“The car is fantastic,” Negri said. “Obviously my team and my engineer have been working very hard to get everything we can out of the car. I’m driving it as hard as I can – it likes to be driven hard.”

His Ligier/Honda is a P2 Prototype, while the polesitting Corvette is a Daytona Prototype, as are the other four cars starting ahead of Negri. The DP cars are descendants of the top class in the Grand-Am series, and the P2 cars were the top class in the American Le Mans Series, and when the two merged into the TUDOR Championship at the start of 2014, IMSA officials worked hard then, and now, to equalize the two Prototypes as much as possible.

Still, “The cars are pretty different,” Negri said. “Each one is quicker on separate parts of the track. It should be pretty interesting.”

Fittipaldi also applauded the decision to cancel qualifying. “Obviously I can’t complain,” Fittipaldi said, since he is starting up front, “but at the same time I think it was the right decision. With the amount of rain we had this afternoon it would be risky, and we could lose a couple of cars.”

In a six-hour race, though, Fittipaldi said starting up front isn’t that important. “Realistically you want to start up front, but you can win this race starting from the pits. Our car is very strong – in one way I wish we would have qualified to see what we can get out of the car.”

If Sunday is rainy, all the teams will have to make some adjustments, as none of the practice sessions were in the wet. “We’d have to take a calculated guess” as to what changes should be made pre-race, Negri said.

In GT-Le Mans, another Corvettes will start at the front of the class, as the No. 3 Corvette Racing C7.R of Jan Magnussen and Antonio Garcia is the points leader. They will be under some additional pressure, though – Magnussen crashed the car in practice for the 24 Hours of Le Mans due to a throttle malfunction, and the car not only couldn’t be repaired in time for Le Mans, but it is still in the shop, requiring the team to borrow a car from a European Corvette team. The regular No. 3 may not return until Road America. Second and third in GTLM are the No. 25 and No. 24 Team RLL BMW Z4 GTEs.

In Prototype Challenge, the No. 54 CORE Autosport FlexBox entry of Jon Bennett, Colin Braun and James Gue will lead that class to the green flag. And in GT-Daytona, the class points leader is the No. 48 Paul Miller Racing Castrol Audi R8 LMS of Bryce Miller, Christopher Haase and Dion von Moltke.

MAZDA MAKING CHANGES? The entry list for the Sahlen’s Six Hours of The Glen shows two Mazda diesel-powered P2 Prototypes, but apparently that may change. Mazda received approval from IMSA to race the gasoline-powered engine they competed in the American Le Mans Series with, no surprise since the team has had trouble getting the diesel engine up to speed, in terms of power and reliability. They planned briefly to run one gas-powered and one diesel-powered car at Watkins, but the latest word is that it’ll be one diesel-powered entry. Mazda went with the diesel concept because the Mazda 6 passenger car was supposed to come to the U.S. two years ago, but it still isn’t here.

WILL THE STREAK CONTINUE? Five racers, five different winners in the Prototype class. Will Sunday see the first repeat winner of the season? “We’ll do everything we can to be the first repeat winner,” said Action Express’ Christian Fittipaldi, “but we recognize how tough the competition is.” Five different winners “has been very good for the series,” he said.

LE MANS WINNERS AT WATKINS: The Corvette Racing team of Oliver Gavin and Tommy Milner – with the help of Daytona Prototype driver Jordan Taylor – won the GTE Pro class at the 24 Hours of Le Mans, and Earl Bamber and Nick Tandy, racing in the GTLM class here for Porsche North America in a Porsche 911 RSR, were on the Porsche P1 team that won Le Mans outright, along with F1 driver Nico Hulkenberg. So that’s five drivers who stood on the top step of the Le Mans podium that are competing in the TUDOR Championship race at Watkins Glen.

TUNE IN: Sunday’s Sahlen’s Six Hours will be presented live by FOX Sports, starting with four hours of coverage on FOX Sports 1 beginning at 10 a.m. ET. FOX Sports 2 picks up the action from 2-4:30 p.m. IMSA.com will also carry IMSA Radio plus live timing and scoring throughout the weekend.