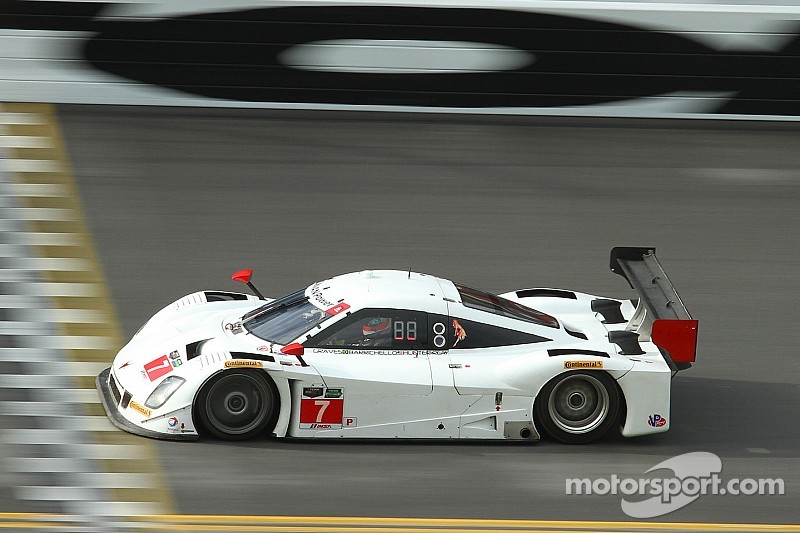 Daytona Beach – Starworks Motorsport waited until the closing minutes of Sunday’s final Roar Before the Rolex 24 weekend at Daytona International Speedway to make a headline. With the track nearly dry following scattered showers throughout the day, the team bolted a set of slick tires on the No. 7 Dinan/Riley and sent out veteran Formula One star Rubens Barrichello – who promptly posted the fastest lap of the day by nearly five miles per hour.

The cars I am running in Brazil are fantastic, but I was missing going 180 mph...

“I’m not excited so much about the time, because that means nothing, but the fact we got the car a little bit better is very encouraging,” said Barrichello, who will co-drive with 2014 Indianapolis 500 winner Ryan Hunter-Reay, Brendon Hartley, Scott Mayer and Tor Graves. “We have a lot to do yet (before the Rolex 24), but I’m enjoying driving very much.”

• Six days after announcing its return to the TUDOR Championship, defending GTD champion Turner Motorsport arrived at Daytona International Speedway on Sunday to shake down its No. 97 BMW Z4. Markus Palttala ran a total of 37 laps on the day, leading the final session.

• The Roar Before the Rolex 24 has proven to be an indicator of success in the Rolex 24 with three of the four class leaders in last year’s Roar finishing in the top two positions in the Rolex 24. Of those, Action Express Racing and Porsche North America went on to win the race in the Prototype and GT Le Mans (GTLM) classes, respectively.

• Three TUDOR Championship team owners – Jon Bennett (CORE autosport), Alex Job (Alex Job Racing) and Will Turner (Turner Motorsport) – have been named as candidates for the 2014 Rolex Bob Snodgrass Award of Excellence, presented by Gorsline Company, based on their team’s success on the track during the 2014 race season. The award will be announced on Friday, Jan. 23 during the Grand Marshal dinner at the Rolex 24.

• While defending Rolex 24 PC winner CORE autosport posted the fastest time of the weekend in its class, Starworks Motorsport and RSR Racing each also led multiple sessions throughout the three-day test. No PC cars elected to go out in the final session of the weekend.

Rubens Barrichello, Driver, No. 7 Starworks Motorsport Dinan/Riley: “Many people left because they were thinking the track was not going to dry. We stayed on the track because we needed the mileage. We put slick tires on right at the end, and I was able to get a fast lap. The cars I am running in Brazil are fantastic, but I was missing going 180 mph – because we don’t reach that in Brazil. It’s really good to be here, and I’m looking forward to the Rolex 24.”

Andy Lally, Driver, No. 44 Magnus Racing Porsche 911 GT America: “We made some changes overnight and we only had a chance to try them out in the wet this morning. The jury is still out on if those changes worked, but obviously the car was quick and we were able to put a good lap in. To end up on the top of the charts on the final day is a great shot in the arm for the guys leading into the next 12 days of non-stop work preparing for the biggest race of the year.”

Scott Sharp, Owner/Driver, Tequila Patrón ESM: “Hopefully [the No. 1 car] will get out next week once we get all of the pieces together. We were a little optimistic bringing it here, but at the same time we needed some of the HPD guys to do a few things on it too, so it made sense.”

Jonathan Bomarito, Driver, No. 70 Mazda SKYACTIV-D Prototype: “This is really my first weekend with the team and watching the program over the last year and seeing the leaps and bounds they’ve made from inside the cockpit is great. We didn’t run in the wet today because we feel good about where we’re at pace-wise and with reliability. It was an incredibly productive two days. Both cars ran every lap of every session. We were able to learn more in two days then we have in a long time.”

Bryan Sellers, Driver, No. 17 Falken Tire Porsche 911 RSR: “We tested [at Daytona] in November so we knew what we were up against, but the conditions were so different between the November test and this test. The important thing about the Roar is that you need to have things right before you leave the Roar and come back for the Rolex 24 because you don’t have a lot of time. We know we have a durable tire that can last so now it’s about finding drivability and speed.”