Start of the season for Audi at Daytona.

The opening race of the new Tudor United SportsCar Championship (TUSCC) marks the premiere of the Audi R8 LMS (GTD) at the same time, which alongside Fall-Line Motorsport and GMG Racing is fielded for the first time by the new Audi customers Flying Lizard Motorsports and Paul Miller Racing.

A word from ... Markus Winkelhock 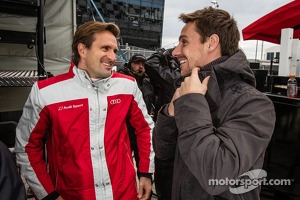 This coming weekend you compete in the 24 hours of Daytona in an Audi R8 LMS fielded by the new Audi customer team Flying Lizard Motorsports  do you still think about the memorable final lap last year? That we lost victory last year while leading with only about 200 meters to the finish was obviously unlucky and extremely annoying. However, everything starts afresh this year and Im looking forward to my second outing in the 24-hour race at Daytona. The prospects look good: car, team and team-mates suit each other perfectly. In this constellation, we have a good chance of fighting for victory.

How well are you getting along with the new US version of the Audi R8 LMS? Im very familiar with the Audi R8 LMS and know how it handles on the race track. It is quick and is very easy to drive. During the traditional test days at Daytona, I had no problems getting to grips with the new GTD car. Even though we have to make do without ABS and traction control, we nevertheless found a very good set-up together. Im convinced that the Audi R8 LMS will as usual prove its reliability in the endurance race.

Only two weeks after the 24 hours of Daytona, the next challenge looms at the 12 hours of Bathurst. Are you looking forward to your first outing in Australia with the United Autosports team? Very much so. Ive never been to Bathurst before and cant wait for the race. To prepare, Ive already watched a few onboard videos in the internet and am well impressed. At several points you have to drive very close to the wall, it goes uphill and downhill and you could sometimes think that you are racing on a street circuit or the Nordschleife. Bathurst is certainly well worth a visit.

Large contingency of Porsches prepared for the Daytona 24