DAYTONA BEACH, Fla. – Driving the No. 45 Flying Lizard Motorsports Audi R8 LMS, Spencer Pumpelly posted the fastest GTD lap time at Daytona International Speedway during the ‘Roar Before the 24,’ a three-day test to prepare for the Rolex 24 at Daytona. 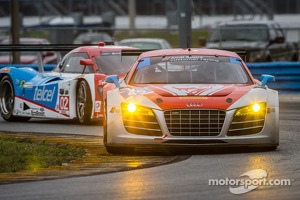 Recently announced as a full-season driver for Flying Lizard Motorsports’ 2014 TUDOR United SportsCar Championship, Pumpelly and team continue to get acclimated with their new Audi R8 LMS machines. Off-season preparations came to fruition at Daytona International Speedway, as Pumpelly clicked off the quickest GTD lap on day one of a three-day test.

“I think we were up to speed a little quicker than everyone else was when the weather was good on Friday,” Pumpelly said. “If you look at the session on Sunday morning, we were the fastest there too, but not by as much as Friday. We had the quickest time, but there’s a lot of other cars that are knocking at the door for sure.”

In a stacked GTD field of Audis, Porsches, Ferraris, BMWs, Aston Martins and Vipers, where the top seven cars were separated by a mere 0.5-second, Pumpelly’s lap of 1:47.981 could not be matched. Co-drivers, Nelson Canache Jr. and Markus Winkelhock, were each able to top their respective track sessions as well, demonstrating that the No. 45 will be tough to beat in the Rolex 24.

“The car is new and the track isn’t one the Lizards run a lot, but they know how to do endurance races,” Pumpelly said. “They’ve done the Rolex 24 and Le Mans, so I think for the Lizards this is all familiar stuff.

“I’m really enjoying the Audi,” Pumpelly added. “It’s a lot different from the Porsche in many ways, but not so different that it wasn’t easy to get up to speed and feel comfortable in it. There are some nuances for sure. The way the gas pedal relates to how much throttle is given to the big torquey engine, for example. It doesn’t have the finite control that the smaller-engine 911 has, but it’s much easier in the brake zone—it turns in more aggressively. It’s a fun car to drive. It’s not super busy, it’s just fun.”

In addition to a new car, Pumpelly is getting accustomed to the new TUDOR United SportsCar Championship, which is a merger of the two series he raced in previously: the American Le Mans Series and the Rolex Sports Car Series. The unification has brought teams from each championship together for the first time, heightening the level of competition across all categories.

“It’s really odd,” Pumpelly said. “It’s been so divided for so long. The two never really mixed and now everyone is here together. It’s interesting to see what influences from each series are coming forward. It’s going to be good for the fans. I’m enjoying the new series so far and I love having everybody here.”

#NothingButTailLights as Starworks rule with fastest lap at the Roar

F1 told to be 'silent' during Russian anthem

F1 told to be 'silent' during Russian anthem