Pruett holds off late charge from Brundle to win at COTA 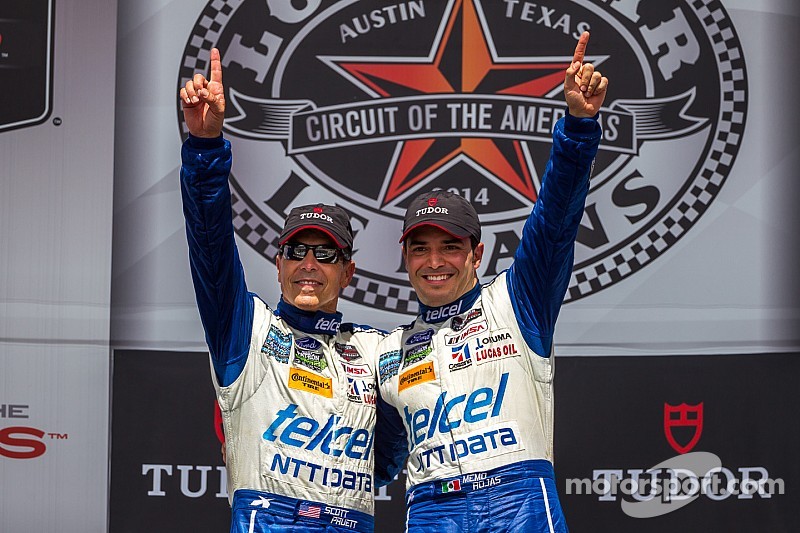 How is it possible to go faster than your competitors, work traffic, and still save enough fuel to make it to the checkered flag?

That’s why he’s Scott Pruett, and we’re not.

After a generally disappointing season, Scott Pruett and Memo Rojas pulled a rabbit out of the hat for Ford and the whole Ganassi Racing team with a solid win at the Lone Star Le Mans race at Circuit of the Americas. It was Pruett’s 59th victory. “We’ve had a real up and down season,” Pruett said. “We needed this.”

Starting third on the grid, the team won a close battle in the closing stages against the second-place Ligier/Honda of Oak Racing and Gustavo Yacaman and Alex Brundle, and the Action Express Corvette with Joao Barbosa and Christian Fittipaldi, which finished third. Those two cars lost a legitimate shot at catching Pruett in lapped traffic – a pair of gad-battling BMWs in particular -- and Pruett coasted under the checkered flag easily.

“I knew the 42 car (Brundle) was coming hard,” Pruett said, “but traffic worked in our favor.” He ran out of fuel on the cool-down lap, he said, and parked the car on the track.

In GT Le Mans, the two factory SRT Vipers took first and second, after problems sidelined the faster Porsche 911 RSRs of Nick Tandy and Jorg Bergmeister in the 911 car, and Patrick Long and Michael Christensen in the 912. The 911 finished 45th in the 51-car field, while number 912 was third in class behind the Vipers – Jonathan Bomarito and Kuno Wittmer in the winning number 93, with Doninik Farnbacher and Marc Goossens close behind in the number 91.The two factory Corvettes had a terrible day, finishing ninth and 10th in class.

In Prototype Challenge, a second-place finish for the Core team of Colin Braun and Jon Bennett was good enough to wrap up the drivers’ championship. Winning the race, though, was the 8 Star team of Luis Diaz and Sean Rayhall. Braun was leading but received a 30-second penalty – which, he said, he did not think he deserved – and was not able to make up the difference.

In GT Daytona, Ben Keating and Jeoren Bleekemolen made it a Viper sweep, with Keating’s lone privateer number 33 overcoming an early oversteer problem to take the victory over John Potter and Andy Lally in the Magnus Racing Porsche 911 GT America. It was the Viper’s second victory.

Overall, it was a solid relatively clean race, though multiple drivers said traffic was a factor almost every lap. There were 10 Prototypes, 11 Prototype Challenge cars, 11 GT Le Mans entries, and 20 GT Daytona cars, but the Fall-Line Audi R8 of Charles Espenlaub and Charlie Putnam never started.

At the moment, track crews are working hard to clean the track – the rubber debris was substantial – and repair some of the green “indoor-outdoor carpet” that lines some corners, that was torn up in the race, though it is supposed to last at least 10 years. The World Endurance Championship takes to the track shortly for their six-hour race.

For the TUDOR Championship teams, the season ends in a couple of weeks at Petit Le Mans at Road Atlanta.