Full-season drivers Joao Barbosa, Christian Fittipaldi and Sebastien Bourdais were all on hand at the Sebring test.

The testing marked the first official laps for the 2014-specification Daytona Prototypes and the TUDOR Championship. 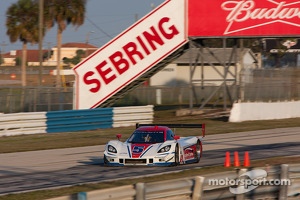 Full-season drivers Joao Barbosa and Christian Fittipaldi as well as Sebastien Bourdais, who was recently announced as the third driver of the No. 5 Corvette DP for three of the North American Endurance Championship rounds, were all on hand at the Sebring test.

The hard work and preparation of the Action Express Racing team saw the car prepared to take to the track from the moment the green flag flew for the first session of the day on Saturday.

Barbosa spent the morning session at the controls of the No. 5 machine and reported that he was happy with the updates to the new car. Following the lunch break, rain moved into the area for most of the afternoon and the team opted to remain off track until Sunday morning.

Sunday brought much better weather and the team utilized the day to work through a variety of setups on the Corvette DP. All three drivers had the opportunity to take laps and experience the track with the new car, with the Corvette DP setting the fastest time of the two-day test.

Quickly moving from one legendary track to the next, Action Express Racing headed just a couple of hours north to Daytona International Speedway – the site of the Rolex 24 At Daytona which will open the 2014 season on January 25.

Barbosa, Fittipaldi, and Bourdais were back in action at Daytona on Tuesday in the No. 5 Corvette DP, which was also joined by the 2013 spec No. 9 Action Express Racing Corvette DP.

Bradley Smith, who won the 2014 Sunoco Rolex 24 At Daytona Challenge, tested the No. 9 with the team as he made his first steps forward in North American racing. Smith has earned the opportunity to race in the huge Rolex event with his European success, and the team was pleased to provide the young Englishman the chance to become familiar with the Daytona Prototype with some testing at the track.

Both Action Express Racing team cars made the most of the available time on Tuesday, taking numerous laps around the famous 3.56-mile circuit. Fittipaldi spent a few laps shaking down the No. 9 machine before handing the car over to Smith, who also eagerly soaked up some tips from the 2004 Rolex 24 winner as Smith was quickly up to speed in the No. 9.

“I had a fantastic first day here at Daytona,” said Smith. “It was a lot to learn with the DP car and also the Daytona circuit with the banking. We managed to get a lot of laps in which was good. The team did a fantastic job of helping me out and making sure I understood what was going on with the car and how to drive it and everything.

To be working on the same team as Christian (Fittipaldi), Joao (Barbosa) and Sebastien (Bourdais) – to have really experienced guys like that offering advice is just amazing. You don’t get much better in DPs than those guys. So to learn and compare to them has been a great help for me.”

Barbosa, Fittipaldi and Bourdais once again were able to work through the team’s pre-set test plan through Tuesday, rotating through so that each driver was able to spend time behind the wheel of the No. 5 Corvette DP.

The day closed with a setback, as the No. 5 Corvette DP experienced a rear tire failure on the team’s final lap of the day and the car sustained damage after rotating and briefly becoming airborne.

The No. 5 was the second car of the test to experience a tire failure resulting in the car getting off the ground, which prompted IMSA and Continental Tire to jointly decide to suspend Prototype testing on Wednesday in order to investigate the issue further.

“Overall through both the Sebring and Daytona tests it was very positive,” offered Elton Sawyer, Director of Team Operations. “Our guys did a great job getting the 2014 spec car ready to go. Bradley Smith did a tremendous job in the No. 9 car which was a 2013 spec car. Now we have something most of our competitors don’t have, plenty of data that we can go back and look through.

Unfortunately we had the tire situation but collectively between IMSA, the teams and Continental, I feel like they have the best people working on it. We’ll take everything we learned and we’ll start getting ready for the Roar testing January 3-5. We expect to be a serious threat not only for the Rolex 24 but anytime we are competing.”