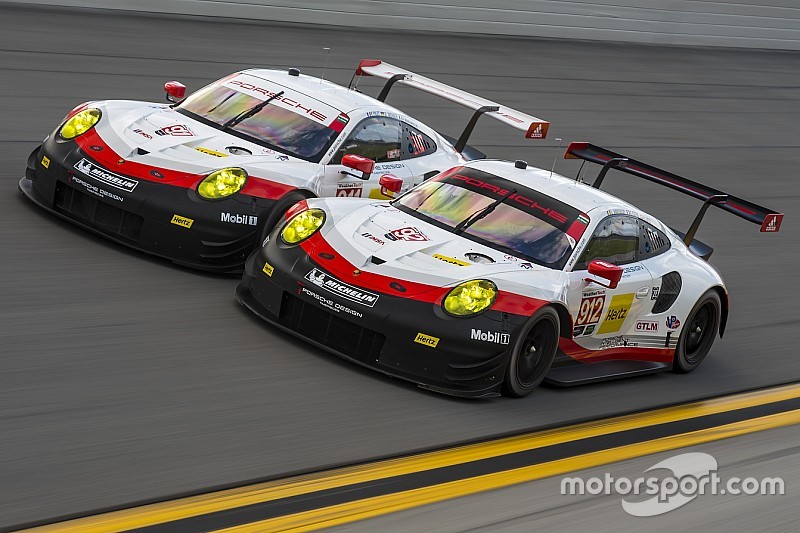 Porsche 911 GTLM racer Richard Lietz believes Ford’s pace advantage for the Rolex 24 Hours at Daytona is mainly due to its superior torque compared to class rivals.

Ford scored a 1-2-3 in qualifying, with the closest competitor – the Risi Ferrari – 0.648s slower. The fastest Porsche – which is an all-new, mid-engined design for 2017 – was a further tenth of a second in arrears.

“We did our best in qualifying, but it looks like the Ford is really on it,” said Lietz, whose #912 Porsche starts eighth in class. “They also have four cars at this race, so it shows how important this race is for them. But I think we should have a chance over the distance of a 24-hour race.

“They are strong in third, fourth and fifth gears. So it’s not traction, it’s torque maybe. With the Corvettes, BMWs and Ferrari we are quite on the same pace. But the Ford looks very strong as you can see by the six-tenth [margin] in qualifying.

“Because of the BoP here, we cannot reduce the drag as much as we want for the straights here. But we’ll do our best within these rules.

Patrick Pilet, who will drive the sister #911 car, is also upbeat about its chances after a strong performance in testing.

“It’s like the best 911 ever, I think,” said Pilet. “It’s a lot easier to handle, as a driver, and we’re directly on the pace. The car is more predictable than the last one. Small changes have made a big difference.”

On the subject of it being the first-ever 911 race car that has its engine position ahead of the rear axle, Pilet quipped: “We shall all forget about the position of the engine after the victory!”

Garcia on Corvette pace: "We just have to keep working and not worry"