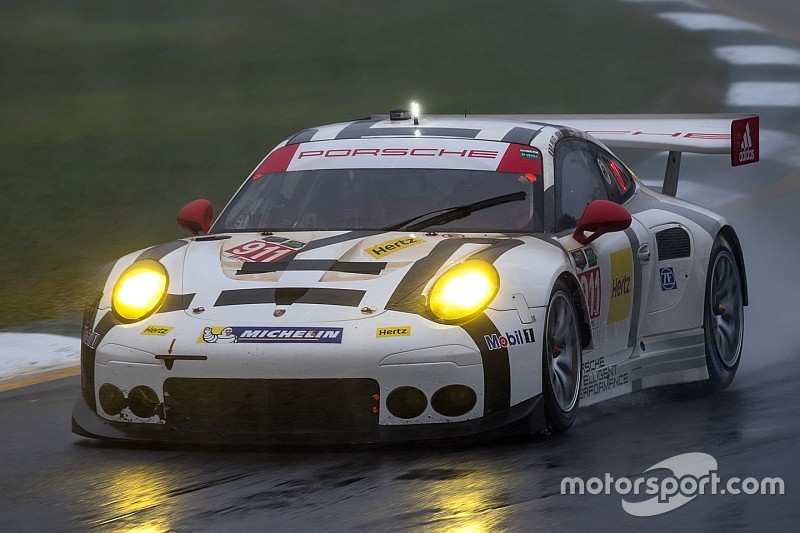 With Tandy’s win at a rain-soaked Road Atlanta, the No. 911 Porsche North America team earned its fourth GTLM victory of the season, winning the 2015 TUDOR United SportsCar Championship team title. It also propelled his co-driver Patrick Pilet to the GTLM driver title, beating out No. 25 BMW Team RLL drivers Bill Auberlen and Dirk Werner by 10 points in the standings, 315-305. Tandy did not win the driver championship alongside his teammate because of three races missed due to overseas commitments.

The No. 4 Chevrolet Corvette C7.R of Tommy Milner, Oliver Gavin and IndyCar regular, Ryan Briscoe, earned its first TUDOR Championship podium since January’s Rolex 24 At Daytona where Corvette Racing regulars finished third. Milner and Gavin’s most recent podium came in June’s 24 Hours of Le Mans when they won the GTE Pro class overall with Wayne Taylor Racing’s Jordan Taylor in that very same Corvette. Their Corvette Racing teammates in the No. 3 entry, Antonio Garcia and Jan Magnussen, finished sixth in today’s race and third in the GTLM points standings.

Second in the race was Andy Lally, John Potter and Robert Renauer in the No. 44 Magnus Racing Flex-Box Porsche 911 GT America. This is team’s second podium of the year after finishing in second at the most recent endurance race, the Sahlen’s Six Hours of The Glen. Rounding out the podium was the No. 93 Riley Motorsports TI Automotive/Viper Exchange Dodge Viper SRT GT3-R co-driven by Cameron Lawrence, Al Carter and Marc Goossens. Lawrence and Carter clinched the Tequila Patrón North American Endurance Cup GTD title earlier in the race.

• The DEKRA Green Challenge Award winner was the No. 24 BMW Team RLL IHG Rewards Club BMW Z4 GTLM. The award is presented each race to the most environmentally clean, fast and efficient GTLM competitor. The award is determined through Green Racing protocols established by the United States Department of Energy (DOE), Environmental Protection Agency (EPA) and Society of Automotive Engineers (SAE) International.

“When the race was coming to a close, I was aware that the No. 31 car was in the lead, but I knew if we had another rain shower I knew we would checker the race, so that was why I was pushing so hard to get ahead of the GTLM cars, and once I had done that and we had a really good pace and were comfortable we were catching the No. 31. It was a case of just pulling ahead of the rest, but we ended up winning overall, so it was fantastic.”

“[Winning the championship] means a lot. It’s a lot of work, especially since I was with Porsche since 2008, it’s really a championship I love. It’s a fight with Corvette and BMWs, and all the manufacturers really push us. The team works so hard to improve the car, we had a really bad thing in the beginning of the season, and we just improved the car, improved everything. It’s just, I’m so happy now, just trying to enjoy the moment, and looking backward to what we have achieved, it’s really amazing.”

“What I would say first, Christina was a formidable competitor. We were in the same place, we led up until the final two races and we got beat. It causes that much more euphoria and elation to come from behind to get it. Every one of my cordilleras did a spectacular drive all year. Townsend was the rock. We were close, we’ve won the [Tequila Patron North American Endurance Cup], but this was a really sweet, sweet win for us. I can say Townsend and I will be back for another season, and we will announce our plans shortly.”

“It’s a great combination but I’m a little bit in shock, in these conditions we knew we’d be quick here in the dry, in the wet we were concerned. We knew we had to keep it on the island all day. I’m so happy for Bill, this season. He was the backbone of our championship run; he drove impeccably all year. I’m so glad we ended up with things this way.”