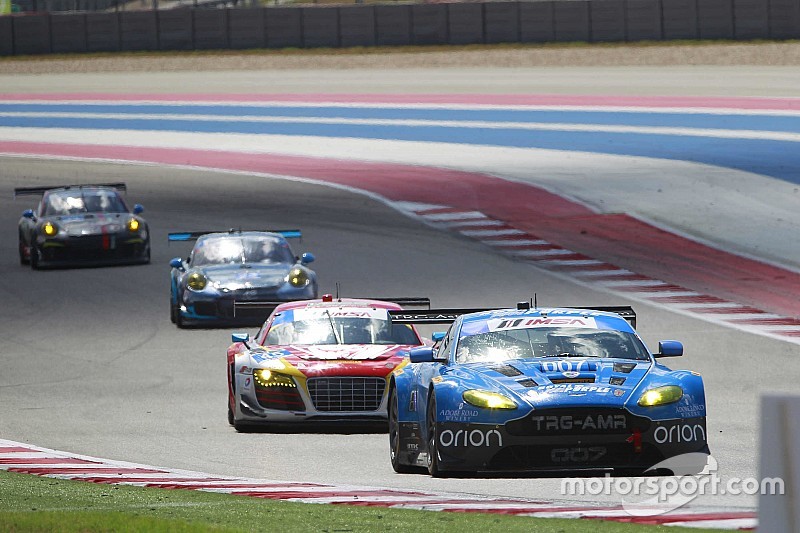 Titles in all four classes will be decided at the 12-turn, 2.54-mile circuit, with GT Le Mans (GTLM) and GT Daytona (GTD) championships coming down to a respective three- and one-point separation between the first and second place drivers in the standings.

In GTLM, Porsche North America driver Patrick Pilet leads BMW Team RLL drivers Bill Auberlen and Dirk Werner by just three points after the BMW duo scored a late victory in the most recent Lone Star Le Mans at Circuit of The Americas, 279-276. However, Pilet remains optimistic about his and co-driver Nick Tandy’s chances in the No. 911 Porsche 911 RSR.

Everything we do for the race will be with a view for the championship.

"It's a lot better to be in my position, leading the championship, than to be in second,” said Pilet, who had won three of the last four races alongside Tandy. “For sure, we lost some points in the last race, but we always have a good car at Petit and at our last test it was really good. I'm really confident for the race. I think Road Atlanta is a really good track for the Porsche. We have a strong lineup, a good team, and I'm pretty sure we have a good chance to win the race."

Rounding out the top three in GTLM, only 10 points behind leader Pilet, are No. 3 Corvette Racing Chevrolet Corvette C7.R co-drivers Jan Magnussen and Antonio Garcia, 279-269. The pair led the standings for much of the 2015 season after opening the year with back-to-back victories in the Rolex 24 At Daytona and Mobil 1 Twelve Hours of Sebring Fueled by Fresh From Florida alongside co-driver Ryan Briscoe, who returns to the lineup this week. Magnussen and Garcia also lead the Patrón Endurance Cup standings.

“The one we aim for is the drivers’ championship, but the Patrón trophy is also very important,” Garcia said. “We will try to achieve every championship we have on the line. Petit is going to be back to endurance racing, and that’s where we’ve had success this year. We’ll see how our pace there compares to the competition, and we will give it everything we have.”

The two-time defending Petit Le Mans winners, Wolf Henzler and Bryan Sellers, say the grueling 10-hour race means a lot to them. Although they are out of championship contention, they are hoping for a win to end the season on a high note for Team Falken Tire.

“It’s been a good race for us the last two years,” Sellers said. “Certainly this year will be a little bit more difficult. Everyone’s been strong, competition-wise. This event means a lot for us. With Falken going away, we want to end on a high note. We’d love to be able to three-peat. We’re going to pull out all the stops and give it our best effort. We’re happy to bring Patrick [Long] back for this race; hopefully he can help us get that last win.”

“For sure, we’re aiming to do the triple,” Henzler added. “We’ve tested there two days this year. We’ve had a good test; we have a good tire; we have a good lineup. The team is strong, the pit stops are always very good. We always do well at longer races. I think we have a chance. It won’t be easy. We will have to fight hard for a podium for or a win. I know our Falken Tire is good and consistent over a run.”

“Winning the championship would be a major accomplishment in my career and I believe it is a step in the right direction towards becoming a pro driver,” Nielsen said. “Also the fact that no other female has won it before makes it even more special.”

With four second-place finishes and one third-place finish to her name this season, Nielsen and co-drivers Kuno Wittmer and Brandon Davis may need that so-far elusive GTD victory in order to make history and hold off the hard-charging Paul Miller Racing duo Dion von Moltke and Christopher Haase in the No. 48 Castrol EDGE Audi R8 LMS.

“I think we deserve a win and have the driver lineup, the car and the team to do it,” said Nielsen. “Honestly I'm going into the last round to have fun, enjoy it and win. I love Road Atlanta, it's my favorite track and it's such a cool event.”

Von Moltke and Haase, who are joined by Bryce Miller at Road Atlanta, led for the majority of the 2015 TUDOR Championship season before falling behind Nielsen after the Continental Tire Road Race Showcase at Road America. However, they made up significant ground last time out at Circuit of The Americas, and the No. 48 team won at Petit Le Mans last year with Haase and Miller joined by Matt Bell.

Nipping at the Audi drivers’ heels are Scuderia Corsa’s Bill Sweedler and Townsend Bell in the No. 63 Robert Graham/Royal Purple Ferrari 458 Italia. The two currently trail von Moltke and Haase by three in the GTD standings, 255-252, and also are well within striking distance of the top spot in the class.

Speaking of striking distance, Viper drivers Ben Keating and Jeroen Bleekemolen are standing in fourth, just 11 points behind leader Nielsen, 256-245. With two first-place finishes in the last three races, the No. 33 Riley Motorsports TI Automotive/Viper Exchange Dodge Viper SRT GT3-R drivers along with co-driver Sebastiaan Bleekemolen, shouldn’t been counted out of the title race just yet.

Coverage of Petit Le Mans powered by Mazda will begin on FS2 (FOX Sports 2) at 11 a.m. ET on Saturday, and will alternate throughout the day with IMSA.com. This includes the finish and post-race coverage on FOX Sports 2 beginning at 8:30 p.m. ET.

Leading by only one point, TRG-Aston Martin Racing is heading into Petit Le Mans