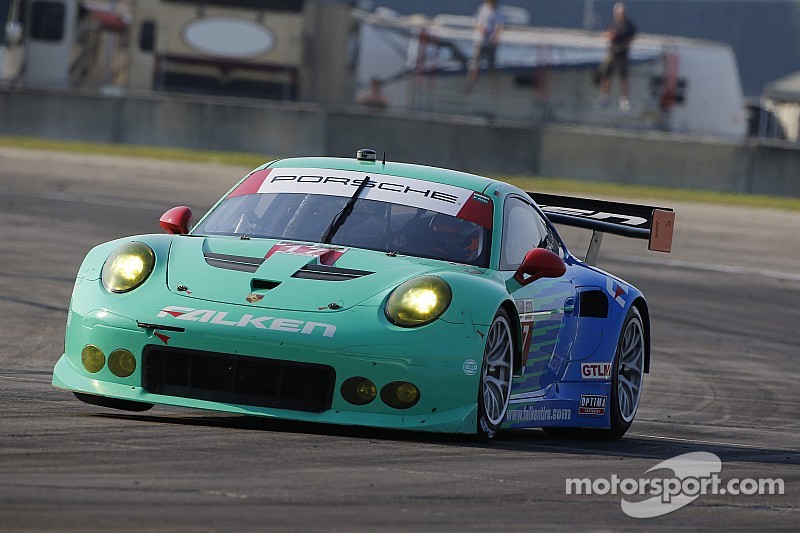 Stuttgart - At the wheel of the Porsche 911 RSR, Porsche works drivers Wolf Henzler (Germany) and Patrick Long (USA) together with Bryan Sellers (USA) occupied third place in the GTLM class at the 12 hour race in Sebring. For the Falken Tire customer squad, this marked the first race with the 911 RSR at the long distance classic in Florida. Victory in the GTD class went to the Porsche 911 GT America fielded by Seattle/Alex Job Racing with drivers Mario Farnbacher (Germany), Ian James (USA) and the former Porsche Junior Alex Riberas (Spain).

Despite their strong performance with the 911 RSR, the Porsche North America works team went home empty-handed. Right up until the last hour they held onto the lead, but were unable to repeat last year’s victory at the oldest long distance race in the United States.

Two Porsche 911 RSR racers locked out the first grid row in qualifying – a better starting position for the defending champions of the Tudor United SportsCar Championship would not have been possible. Heading into the race from pole position, the #912 Porsche 911 RSR helmed by Frédéric Makowiecki (France), Jörg Bergmeister (Germany) and Earl Bamber (New Zealand) took the lead.

A podium in Sebring is a great achievement. And of course this is also true of the GTD win of the guys from Seattle/Alex Job Racing.

Over the course of the race on the 5.954 kilometre Sebring International Raceway, the second Porsche North America-run 911 RSR also settled in at the front of the field. After a difficult qualifying session, the 911 campaigned by Falken Tire took longer to pick up pace – but after four hours, Wolf Henzler and his teammates were excited to hold the lead for the first time at the 63rd running of the endurance classic.

On the legendary airfield circuit in the heart of Florida, notorious for its bumpy surface, both 911 RSR turned by far the most laps in the lead. Regardless of the conditions, they maintained a consistent pace: during the day the thermometer climbed to 35 degrees Celsius, after dark the temperatures dropped noticeably. In the midday heat, the track surface temperature hit a record 50 degrees Celsius. Thanks to top performances from all drivers as well as perfect pit stops, everything ran according to plan.

Every time the interim results were displayed hourly by the stewards of the meeting, the 911 RSR held the lead of the GTLM class – up until the last hour. Then things began to unravel: The leading Porsche 911 RSR with the starting number 911 ran into gearshifting difficulties. Beforehand, the second-placed #912 sister car had been held up in the pits with the crew unable to get the left rear wheel off. In the end, Nick Tandy, Patrick Pilet and Richard Lietz were flagged off in fifth place, with their teammates Earl Bamber, Jörg Bergmeister and Frédéric Makowiecki in seventh.

In the fiercely-competitive GTD class, the Porsche 911 GT America fielded by Seattle/Alex Job Racing put in an impressive performance. With former Porsche Junior Alex Riberas and his teammates Mario Farnbacher and Ian James sharing the cockpit, the American squad scored their first win of the season in the Tudor United SportsCar Championship. Although the trio had at times dropped down the field, they refused to give up and fought their way back to the front to bring home victory in the last lap.

Comments on the race

Marco Ujhasi, Overall project manager GT works motorsport: “Testing in Sebring paid off. The balance of the 911 RSR was exceptional. We were well prepared and our strategy would have worked. For eleven hours we were totally competitive. Congratulations to the Falken Tire squad. A podium in Sebring is a great achievement. And of course this is also true of the GTD win of the guys from Seattle/Alex Job Racing.”

Wolf Henzler (#17): “A fantastic race. Third place is a super result for the entire Falken Tire team. We were able to match the pace of the others, and at times were even in the lead. We didn’t experience one technical problem, our 911 RSR ran perfectly.”

Patrick Long (#17): “That was a long day. Sebring is always difficult. Today it was mainly the heat and the caution phases which gave us a headache. The midway mark in the race was tough, but we finished strongly. It was a great experience to drive for this team.”

Nick Tandy (#911): “Today we could have won. The team worked brilliantly. The drivers shouldn’t blame themselves either. We didn’t make any mistakes, and the cars finished without the slightest scratch.”

Patrick Pilet (#911): “A big compliment to the team. We can’t complain about a thing. The pits stops were great and we had the right strategy.”

Richard Lietz (#911): “Our teamwork was excellent and a top result was within reach until just before the flag. Now we have to turn our complete attention to the next race in Long Beach and go all-out.”
Earl Bamber (#912): “We had a winning car today. The handling was very good. The team had found an excellent setup for the 911 RSR on this difficult track.”

Jörg Bergmeister (#912): “Our 911 RSR ran really well. It was simply superb to drive and, after all, we were leading for eleven hours.”

Frédéric Makowiecki (#912): “Thanks to a strong team effort we were really looking good for a win right up until an hour before the finish. This is something we can now build on for the next race.”

Round 3 of the Tudor United SportsCar Championship will take place on April 18 in Long Beach, California.