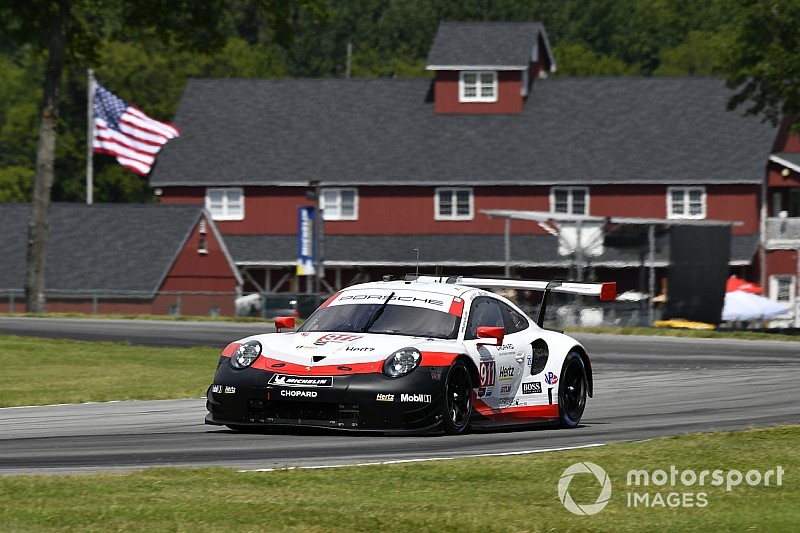 Porsche’s Patrick Pilet set the pace in the second practice session for the GT-only round of the IMSA WeatherTech SportsCar Championship at Virginia International Raceway.

Despite predictions of rain, the session stayed dry. Pilet surged to the top of the times in his #911 911 RSR with 13 minutes remaining, lapping in 1m41.234s to topple Antonio Garcia’s Corvette C7.R from the top spot.

Earl Bamber was third quickest in the #912 Porsche, a tenth of a second off the pacesetting sister car. Richard Westbrook was the quickest Ford, just 0.006s behind Bamber in the #67 GT in fourth.

Jesse Krohn was fifth fastest in the first of the RLL-run BMW M8s, ahead of Dirk Muller (Ford), Tommy Milner (Corvette) and Tom Blomqvist’s BMW.

In GT Daytona, Jack Hawksworth set the pace in the AIM-Vasser Sullivan Lexus, ahead of Robby Foley in the #96 Turner Motorsports BMW M6 GT3 and Bryan Sellers in the #48 Paul Miller Racing Lamborghini Huracan GT3.

The session was briefly interrupted near the end when Andy Lally’s Magnus Racing Lamborghini suffered a major technical issue.

Earlier, Katherine Legge had a big moment in the #57 Meyer Shank Racing Acura NSX GT3 early on due to a suspension problem, but didn’t hit anything and the car was repaired in time for her new teammate, Alice Powell, to get out on track at the end of the session.

Insight: What it’s like being the father of an F1 driver