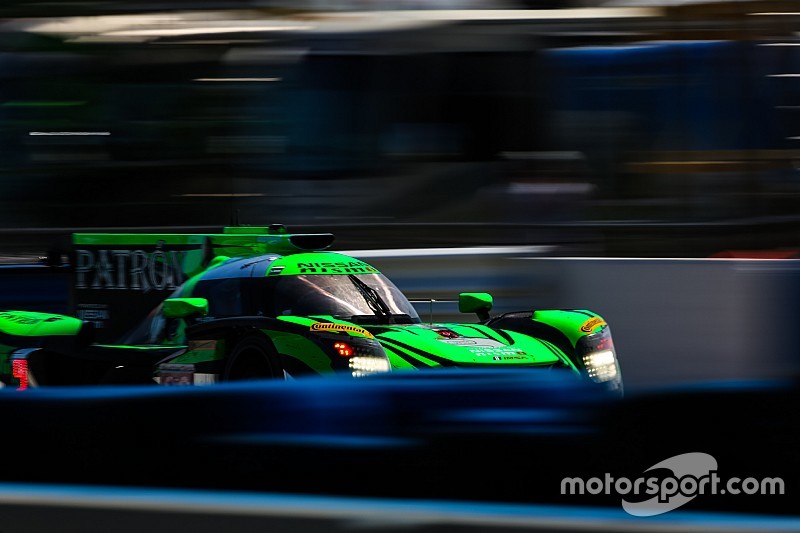 A strong stint from polesitter Helio Castroneves has catapulted Penske back into the  fight for Petit Le Mans victory, after pressuring Bruno Senna into a spin.

Castroneves’ Oreca-Gibson relentlessly closed on the pair of ESM Nissans, and while filling the mirrors of Senna’s second place car, the younger Brazilian took one too many chances in traffic and looped into a spin.

Simultaneously, a full course caution for a broken down GTD car prompted everyone to sprint for the pits where Senna handed over to Pipo Derani and Castroneves was replaced by Juan Pablo Montoya. Erstwhile leader Dalziel stayed in the #2 Nissan but emerged behind Derani, while Montoya fell behind the Action Express Racing Cadillac of Joao Barbosa.

Alexander Sims is now leading in the #25 BMW after a very strong stint from Bill Auberlen, while Ryan Briscoe is up into second in the #67 Ford GT, having taken over from Scott Dixon. Antonio Garcia runs third in the #3 Corvette C7.R but its sister car has been in the wars again, Marcel Fassler taking it for an offtrack excursion which required the removal of signboards and grass from various parts of the car’s aero devices.

That means Alessandro Pier Guidi has the Risi Competizione Ferrari in fourth ahead of the second Ford of Dirk Mueller.

A strong and aggressive stint from Sheldon van der Linde put Land Motorsport at the front with the #29 Audi, and Connor De Phillippi has picked up where his teammate left off.

Daniel Morad has the Alegra Porsche in second ahead of Jack Hawksworth’s Lexus RC F and Matt McMurry in the Park Place Porsche.