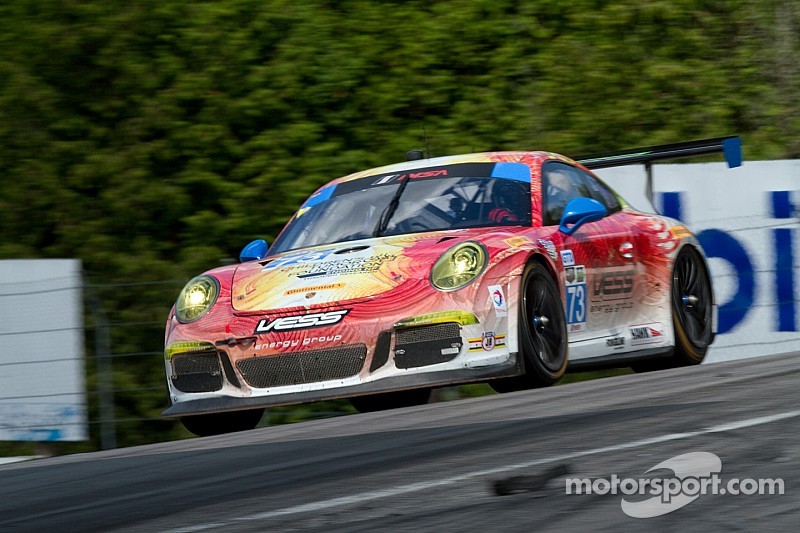 “With how competitive we are it was a good finish, but not the win,” stated Park Place Motorsports team principal John Horton, who also serves as the team engineer. “The last two races were rough, we came this weekend to win. We had a meeting with the guys and went over our routines, practiced pit stops every day and every session. Towards the end of the race we got a little wiggle from one of the other cars, which is really what cost us. We had the math worked out that we could have beaten the Viper by 3.5 seconds, so that little wiggle kind of cost us the race.”

Qualifying ninth in class, the No. 73 Park Place Motorsports / Vess Energy Group / Children’s Tumor Foundation Porsche 911 GT America knew that with strategy and hard charging, the combination of Patrick Lindsey and Kévin Estre would be a formidable combination for the event. At a distance of 2.46 miles featuring high speed corners and sweeping elevation changes, the circuit is known for providing ample action with a premium being placed on attrition and consistency.

Making immediate work of the field in front of him, starting driver Patrick Lindsey was off to a strong start, taking the opportunities as they came. Making several strong passes at the start, the tricky nature of the course played a premium on tire management, with Lindsey doing his best to keep all four Continental Tires under him as he lapped the circuit.

By time the first round of pit stops would cycle through, Lindsey found himself in the top-five, handing the car off to teammate Kévin Estre for the final two stints of the race. Estre was off to an immediate pace, continuing the momentum set by his teammate, including some key passes to get the team in a podium position.

By time the final stops cycled through, the team’s strategy would place them in first place, but as the final moments of the race neared the No. 33 Viper GT3R of Jeroen Bleekemolen was approaching quickly with fresher tires. Despite the closing rate, the Park Place Porsche held a 13.5 second gap over the charging Viper with the No. 73 taking the white flag in the lead.

Unfortunately, multi-class lapped traffic would end up sending the No. 73 wide, giving the Viper an opportunity to close and eventually pass the Porsche.

Even though the Park Place Motorsports team would match their best-ever finish, and their first podium finish in the TUDOR United SportsCar Championship, the feeling of disappointment was universal within the team.

“Even though we should be happy with second, we were so close to winning that we’re all feeling a little bittersweet,” stated co-owner and driver Patrick Lindsey. “It’s frustrating to lose on the last lap because you got held up in lapped traffic, but there’s nothing we can do. We were the best Porsche in the race, and I definitely feel like we have a handle on this heading to Indianapolis. We almost won at Indy last year, and it definitely feels like everything is gelling at the right time.”

Al Carter starts and finishes in tenth in Canada