At the start, Helio Castroneves in the #7 Acura looked pre-emptive from second on the grid, had to get off the throttle to allow the pole-sitting Mazda RT24-P of Oliver Jarvis to pull abreast, and then saw Acura teammate Cameron whiz past on his inside to take second.

Castroneves ran wide at Turn 4 and was passed by Pipo Derani in the #31 Action Express Racing Cadillac DPi-V.R but then Ryan Hunter-Reay in the second Mazda was half-spun by Castroneves as the Brazilian rejoined the track, yet somehow kept the #55 car under control.

Castroneves picked up heavy front-right fender damage as a result of the collision with the Mazda but the bodywork eventually tore itself away in the airflow.

At the start of Lap 8, Jarvis lost momentum behind GT cars and Cameron pounced, bravely running alongside Jarvis through Turn 1 and taking the lead before they reached Turn 2.

The recovering Mazda of Hunter-Reay had picked off both Joao Barbosa in the #5 AXR Caddy and Derani to move into third, but was already 15sec behind Cameron, in turn 5sec clear of Jarvis.

Jarvis stopped on Lap 28 and stayed onboard, while Cameron pulled in the following lap, handing over the #6 Acura to Montoya. When Castroneves stopped the #7 car, he handed over to Ricky Taylor and Team Penske fitted a new nose but the lack of front-end fender would ensure the car remained aerodynamically compromised.

Hunter-Reay would remain onboard for a second stint when he pitted the #55 Mazda on Lap 31.

Following these first stops, Jarvis was running second, 4.7sec behind the lead Acura of Montoya. Behind them Hunter-Reay lost third to Derani, who had stopped a lap earlier and had warmer tires. Filipe Albuquerque, now piloting the #5 AXR Cadillac, was fighting hard with Taylor’s Acura.

On Lap 34, as Montoya got caught in GT traffic, Jarvis passed him down the front straight, and five laps later Hunter-Reay further improved Mazda’s fortunes, demoting Derani to fourth place with a beautiful pass around the outside of Turn 4.

Taylor made the damaged #7 Acura’s second stop on Lap 58 to emerge in ninth, and two laps later Jarvis pitted with a 2.5sec lead and handed over to co-driver Tristan Nunez. When Montoya pitted for scrubbed Michelins the following lap, his was a short-fill stop and so he emerged in front by 3sec. Nunez closed that gap down but caught GT traffic from Turns 5 through 10 and fell back.

With 45mins to go, Montoya’s lead over Nunez remained around two seconds, while the #55 Mazda was 40sec back, six seconds clear of Nasr’s Cadillac and now with Jonathan Bomarito driving.

That triggered the final round of pitstops, Montoya’s lead over Nunez extending to five seconds, but this was nullified when the full-course caution was thrown after Colin Braun dropped the Nissan DPi in the sand-trap at Turn 4.

Montoya made a brilliant restart and disappeared from Nunez, who now had teammate Bomarito only 3sec behind. However, as Nunez gave vain chase to the Acura, he was able to pull out a 9sec advantage over his teammate.

Nasr closed on Bomarito in the closing stages as the latter was having to save fuel, having stopped earlier than the cars in front. But when Nasr started to edge past the #55 Mazda on the front straight he received a drive-through penalty, as the static yellow was being waved for a spun GTD car at Turn 1.

Bomarito then slowed dramatically but got back up to speed to claim third place. Nasr emerged from his enforced stop to claim fourth, while the second Acura finished one lap down in fifth, Taylor just holding off his brother Jordan in the strangely off-the-pace Wayne Taylor Racing Cadillac.

Matt McMurry and Eric Lux - standing in for Gabriel Aubry, who was on WEC duty at Spa - won LMP2 for PR1/Mathiasen Motorsports. 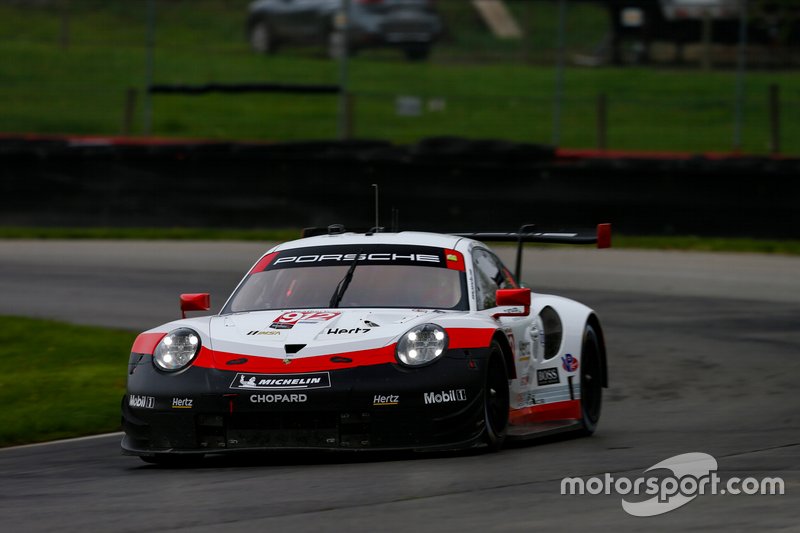 The #912 Porsche of Earl Bamber and Laurens Vanthoor jumped ahead of the #3 Corvette following a pitstop and then pulled away to win.

After Patrick Pilet’s #911 Porsche 911 RSR was given a drive-through penalty for a jumped start, Tommy Milner’s #4 Corvette C7.R pushed the polesitting Ford GT of Sebastien Bourdais down to second on the fourth lap, with Laurens Vanthoor’s #912 Porsche 911 RSR in third.

A long early stop for the #66 Ford as Bourdais handed over to Dirk Muller dropped it down to sixth in class. Once everyone had stopped, it was the #3 Corvette, with Antonio Garcia at the wheel, that led by 6sec as Earl Bamber in the #912 Porsche struggled to hold off Milner.

Just past the one-hour mark, the #4 Corvette suddenly slowed, and trickled round to the pits and went behind the wall before emerging 11 laps down. That moved the #25 BMW with Tom Blomqvist at the wheel into third, 10sec ahead of Nick Tandy in the recovering #911 Porsche.

With little more than an hour to go, Porsche’s fortunes got a boost as Bamber drew to within half a second of Garcia’s Corvette, while Tandy was barely a second behind Blomqvist’s BMW.

Tandy and the #24 BMW of John Edwards then made their second scheduled stops on Lap 70, Garcia and Blomqvist halting the following lap, and Bamber pitting on Lap 73.

By the time the pitstops had finished, Bamber was over 10sec clear of Garcia, while Tandy moved past Blomqvist into P3 at Turn 2 with 50mins to go.

The next significant order change came when Muller’s #66 Ford had to pit when damage it had acquired early in the race caused the bodywork to fall onto its left-rear tire, causing a huge amount of smoke on right-hand turns.

The restart saw Blomqvist pass Tandy for third place, with the Corvette of Garcia in second falling back from Bamber, but at Turn 4 two laps later, Tandy pushed and elbowed his way past the BMW with his inside tires on the grass to claim the final podium position.

Bamber reeled off the closing laps with ease, crossing the line 2.3sec ahead of Garcia, while 1.4sec further back the battling Tandy and Blomqvist finished only six tenths apart.

Westbrook was fifth for Ford ahead of Edwards’ BMW, with Muller coming home a lap down in seventh after his repairs. 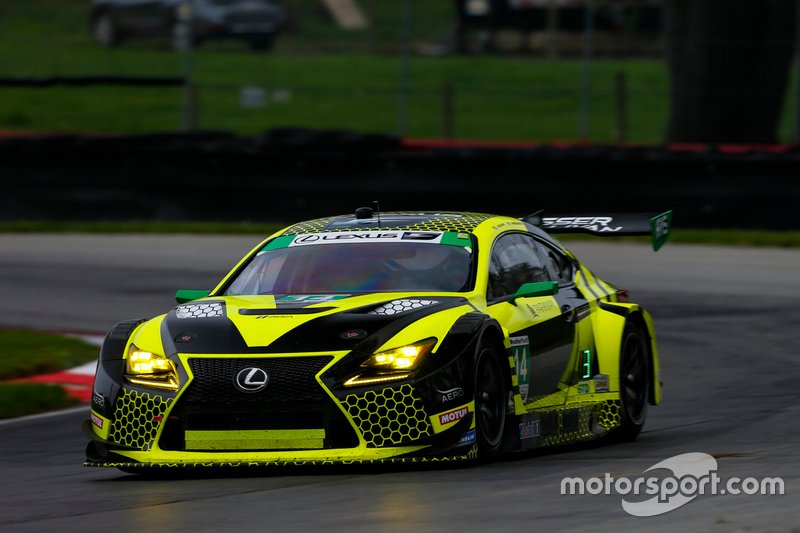 Richard Heistand and Jack Hawksworth scored the first win for the AIM Vasser-Sullivan Lexus team after a tough battle with MSR Acura.

Hindman went 64mins before pitting for the first time, and when co-driver Mario Farnbacher took over he was able to resume in front, 7.5sec ahead of Jack Hawksworth in the #14 Lexus. Scott Hargrove had the Pfaff Porsche into third ahead of Bryan Sellers in the Paul Miller Racing Lamborghini, Katherine Legge in the second MSR Acura and Townsend Bell in the other AVS Lexus.

On Lap 66 the order changed when Legge fell off at Turn 10 while under pressure from Bell, and dropped to eighth. Soon, Legge ground to a halt briefly on course, but avoided causing a full-course caution when she got going.

After the restart with little more than 20mins to go, Hawksworth got ahead of Farnbacher and into the lead, although he couldn’t escape the attentions of the MSR Acura.

Hargove spun the Pfaff Porsche out of third and into the sandtrap at Turn 1 with 7mins remaining, elevating the PMR Lamborghini into third ahead of Pat Long’s Park Place Porsche which had muscled by Bell at the penultimate corner.

Despite Farnbacher’s best efforts, he couldn’t prise the lead from Hawksworth’s hands and finished 0.6sec behind, almost replicating the Lexus vs Acura battle at the same place the previous year.

Sellers, Long and Bell completed the top five, albeit some 20sec off the lead tussle.