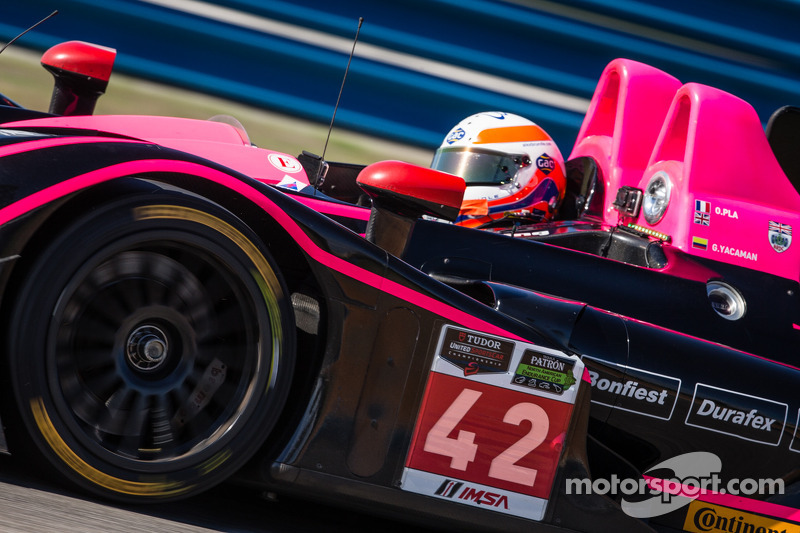 The starting lineup has been set for the Sahlen Six Hours at the Glen this weekend.

Sunday’s race will mark the half-way point of the inaugural TUDOR United SportsCar Championship season. Four classes of cars took qualification runs, and Brundle’s time of 1:37.902 set the pace in the fast Prototype (P) class. Co-driving with the young Brit is Gustavo Yacaman from Colombia and HoPin Tung from the Netherlands.

Said Brundle about his first career pole in America, “It feels good to get the pole at this tremendous venue. I am really enjoying the track even though I haven’t had too many laps so far. I only got in five laps yesterday and got red-flagged a couple of times today. I really enjoyed the qualifying session, and it is fantastic to get my first pole in TUDOR qualifying.

“This team has been working very hard, and we have been knocking on the door for a couple of races. I think it is just coming good and today we got the opportunity when it arose, but it all goes back to what the team has been doing since Daytona. They have been putting a big effort into it.”

For Brundle, he has never raced at Watkins Glen, and his main instruction and guidance came from his teammates. “We just really work well as a team,” he noted.

Perennial champions Scott Pruett and Memo Rojas along with young Sage Karam had the fourth fastest time in the Ford EcoBoost Riley fielded by Chip Ganassi Racing with Felix Sabates. In total, 13 Prototypes are entered and took a timed run.

Colin Braun outfoxed the Prototype Challenge (PC) field of eight with a rapid lap time of 1:40.562 in the CORE Autosport ORECA FLM09. Braun earned his second pole of the season. His co-driver is Jon Bennett.

Tom Kimber-Smith, Sean Rayhall and Eric Lux timed second followed by Renger van der Zande and Mirco Schultis in third. In a practice crash, the cars of Alex Tagliani and Chris Miller were seriously damaged when they came together.

A pair of BMW Team RLL BMW Z4 GTEs qualified first and third in the 11-car GT LeMans (GTLM) field. Leading the way was Andy Priaulx at 1:44.084 with teammate Dirk Mueller grabbing the third spot with Jan Magnussen nestled between the two BMWs. Magnussen and Antonio Garcia were behind the wheel of Corvette Racing’s Chevrolet Corvette C7.R.

“I was delighted to get the chance to qualify the car when it was so hooked up. Luckily, I came here and tested a few weeks ago. The pole is good for the ego, but the race is tomorrow.” Priaulx co-drives with Bill Auberlen and Mueller shares the wheel with John Edwards.

The second Corvette with Oliver Gavin and Tommy Milner didn’t fare as well with a seventh fastest time. In the 19-car GT Daytona (GTD) field, Leh Keen blasted to the point with a time of 1:48.883 in the Alex Job Porsche 911 GT America Porsche. His co-driver is Cooper MacNeil.

Dane Cameron timed second quick in the BMW Z4 he drives with Markusa Palttala. Third on the speed charts was a SRT Viper GT3-R of Jeroen Bleekemolen and Ben Keating.

The Sahlen’s Six Hours of the Glen takes the green flag at 11:15 a.m. Sunday.