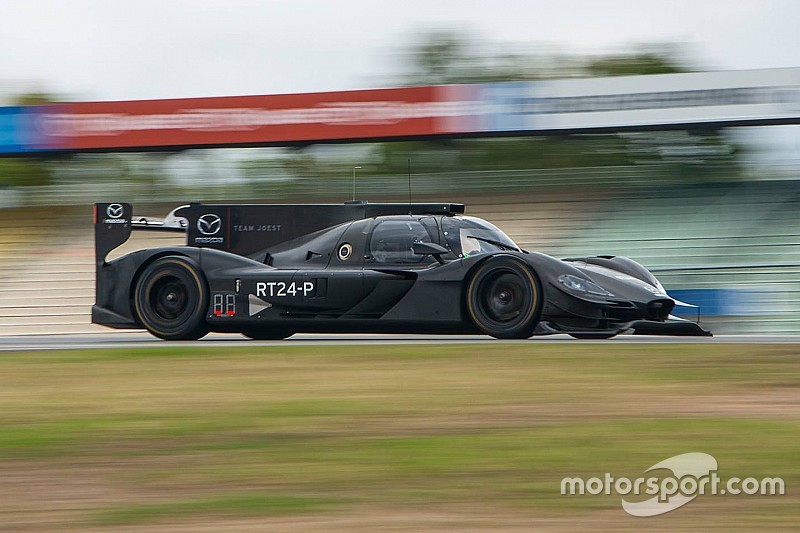 Joest Racing had its first test with the Mazda RT24-P at Hockenheim on Tuesday with Jonathan Bomarito and Tristan Nunez running the Hockenheim short course.

Mazda pulled out of this year’s IMSA WeatherTech SportsCar Championship after the seventh round of the season, in order to allow its new team partner Joest Racing (replacing SpeedSource) an extended offseason to work on the RT24-P.

Although the DPi car earned three podium finishes, it has thus far lacked outright pace, particularly in comparison with the dominant Cadillac DPi-V.R, and even the Nissan Onroak DPi.

Mazda therefore wanted to maximize the opportunities for car-builder Multimatic to work with Joest, which has 15 Le Mans 24 Hours wins and 10 Sebring 12 Hours wins to its name, and pulled the team. Tuesday's RT24-P test was its first under Joest stewardship.

Nunez told Motorsport.com: “Today was about the Joest guys getting their hands on the car to see how it works, and to get back into the swing of things after being out of racing for a year. It was the basic stuff, figuring out what they’ve got to work with.

“I hadn’t raced Hockenheim and it was hard to find a good video of the short course; it’s a pretty technical track. But working with our new team – that was the priority, and it was a great opportunity.”

Nunez said that the team was aware of the car’s shortcomings, and the focus between now and the revised car’s debut at next January’s Rolex 24 Hours at Daytona would be to improve grip and also driver ‘feel.’

“We were definitely lacking aero grip in high-speed corners, pretty much all around the car – front, middle and rear,” he said. “But the other thing was, as we went from track to track, we found the car felt numb to changes.

“It’s a brand-new car so we trying a lot of things and we’d make pretty big setup changes and it didn’t really change much. So Multimatic are already onto that, and I’m sure the Evo car will be a lot more sensitive. I’m pretty excited about that.

“Hurricane Irma affected our schedule in getting the cars out to Germany – I think Joest only got their hands on them seven days ago – so I was amazed at how good a test it was. Not a single mechanical issue, so we got a lot of track time.

“I have the utmost confidence that Joest can turn our fortunes around. You look at their success which stretches back to before I was even alive! And seeing their work ethic and their engineering capabilities at the raceshop the last couple of days, it’s been unbelievable. You can tell they’re really excited about being back with a manufacturer again.”

Bomarito: “We need to cure the understeer”

Bomarito, who joined Mazda after finishing second in IMSA’s GTLM class with the Dodge SRT Viper team, concurred with his teammate, on the aero fixes, in particular highlighting the front-end push that currently hurts the RT24-P’s pace.

He said: “We need a little bit more overall aero downforce, but particularly the front end. That’s what we need to work on. You saw the big front splitter we added at Daytona last year, and that’s to try and create more grip in high speed corners, but even low-speed understeer we need to cure.

“At the moment, even if you coast through the middle of the corner it understeers and that hurts the front tires, which obviously then makes the understeer worse. It’s a very easy car to drive at that point, but it’s very limiting and kills your speed onto the next straight.

“And like Tristan said, then we need to make the car mechanically better so that when we make changes to rollbars and springs and so on, it helps get the car into the right window for that particular track and we can tune it.”

Bomarito observed that the street courses at Long Beach and Belle Isle, Detroit, had been the site of two of Mazda’s three podium finishes this year because the understeer was less prevalent on short duration, lower-speed corners.

“Those definitely suited our car better,” he said, “although we got a third at Watkins Glen too which is obviously high-speed. But to be honest, there was quite a lot of attrition at those races. It’s not like we had the outright pace to take on some of our competitors.

"In a way, this car has been a bit like the opposite of the Lola [Mazda’s previous prototype] which was good on the high-speed smooth road courses.”

Bomarito added that he’s confident that the turbocharged MZ-2.0T two-liter inline four of the RT24-P is capable of taking on Cadillac’s normally aspirated 6.2-liter V8.

“I think so, yeah,” he said. “We’ve had a good year for engine performance and reliability. We made big strides with the powertrain last offseason and I think we’re going to again this offseason, so I feel very happy about that aspect. We just need to be able to take more speed through the corners.”

Both eager to continue with Mazda Team Joest

Although Mazda has not yet announced its driver lineup for 2018, both Nunez and Bomarito expressed strong hopes that they would remain part of the program.

Nunez, who has always wanted to race prototype sportscars since his career started, said: “It’s been a dream of mine to race for a manufacturer, and especially Mazda who gave me the opportunity to get my first pro run since I was a 17-year-old kid. Mazda has become like a family to me, so nothing would make me happier than to continue their journey, especially with a team like Joest.

“At the moment it’s in the air, and I’m sure John Doonan [director of motorsports for Mazda North America] has a long calling list of drivers he needs to talk to. But hopefully we’ll have an answer very soon. I’m going to go training in Boca Raton [Florida, hometown] and keep my schedule open for any and every test they offer.”

Bomarito, a former star in junior open-wheel racing, is regarded as one of the talented Americans who fell off the then-broken ladder to Indy cars. Having turned his attention to sportscars he wishes to remain with Mazda for a fourth season.

“I understand there’s a decision coming very soon,” he said, “but nothing’s been guaranteed for next year so far, and it’s getting quite late. But I think Mazda is a very good option, and I really want to commit.”

Michelin replaces Continental in IMSA from 2019