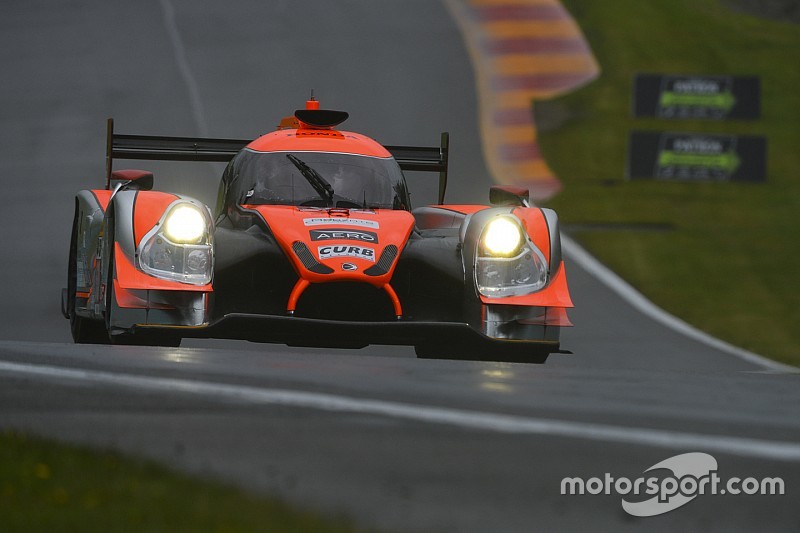 Taylor makes a rare mistake; DeltaWing back from vacation.

WATKINS GLEN, N.Y. -- In pre-race practice, the No. 60 Michael Shank Racing with Curb/Agajanian Honda-powered Ligier JS P2 was consistently the fastest Prototype going into the Sahlen’s Six Hours of The Glen.

But then two unfortunate things happened: Rain washed out qualifying for the TUDOR United SportsCar Championship race, costing drivers Ozz Negri and John Pew a chance to put the car on the pole, since the lineup would be set by points.

And then, a broken suspension took the team out of the race early three hours and 27 minutes into the six-hour race.

The team had spent a lot of time preparing for the race, even coming to the track for private practice sessions. “The car was very good and I was quicker than the guys ahead,” said Negri. Pew took over driving duties with a little over four hours remaining and returned to the track sixth in line. He had moved up into the top five when contact with a GT Le Mans car sent the No. 60 into the wall.

The damage was enough to eventually shear off a bolt on the suspension. The team worked to repair it on pit road, but when rain started falling, the decision was made to retire the car. The team goes straight to Canadian Tire Motorsport Park in two weeks for the next TUDOR Championship race, and with spare parts at a premium for the Ligier, it was determined to be too much of a risk to send the car back out under such hazardous conditions.

“At the end of the day, it’s racing,” said Negri. “Now we will just look ahead to Mosport, I think that is another opportunity for us to do well and we will want to make the most of it.”

TAYLOR MAKES A RARE MISTAKE: If you want to beat the No. 10 Konica Minolta Wayne Taylor Racing Chevrolet Corvette DP, typically you have to outdrive the Taylor brothers – Ricky and Jordan – because if your strategy is to wait for them to make a mistake, you’ll probably lose.

But Sunday, Ricky Taylor, sharing the car with Jordan and longtime co-driver Max Angelelli, made a mistake that cost the team a shot at a victory. On the restart on a wet track with 50 minutes left in the six-hour race, Ricky Taylor was holding off second-place Joey Hand in the No. 01 Chip Ganassi Racing with Felix Sabates Ford, and Christian Fittipaldi in the No. 5 Action Express Racing Corvette DP, around 10 of the iconic racetrack’s 11 turns. But, in the blink of an eye, Taylor lost control of his Corvette DP between the left-hand turn 10 and the right-hand turn 11 that leads onto the front straight. He made heavy contact with a tire barrier, lost the front-end bodywork off the car, then made heavy contact with the SAFER Barrier, heavily damaging the right rear of the car.

Taylor was able to limp back into the pits, but repairs proved to be too extensive and the car was retired with 39 minutes to go for its first DNF (did not finish) since last August at Road America in Elkhart Lake, Wisconsin. Taylor admitted being the first car in line around a heavily waterlogged racetrack proved to be a huge disadvantage.

“I feel terrible, especially because our car was really, really good,” he said. “It’s hard to be the leader, sometimes, experimenting with the grip. I made a mistake and it’s as simple as that. With an hour to go, we have to be pushing for every inch we can get. I feel bad for all of our guys and Konica Minolta and everybody involved with our team. The positive was that we had a really, really good car and we had a shot at winning. I had a lot of confidence – in the wet, especially. I just made a tiny mistake and there’s not a whole lot of room for error here at Watkins Glen.”

DELTAWING STRONG, UNTIL IT WASN’T: After taking off the Detroit race to work on developing the innovative car, the DeltaWing team was back in action at Watkins Glen. After starting eighth, the DeltaWing ran in fifth position for much of the early going before gearbox issues, the longtime Achilles Heel of the car, and Mother Nature ended the day early.

Memo Rojas had a strong opening stint, but shortly after turning the car over to Katherine Legge, the transmission problem arose. The team got Legge back on track, intending to use the remaining laps as a test session. However, the skies opened once again and with deteriorating conditions resulting in a red flag with an hour and a half remaining, the team withdrew the car from competition, finishing eighth in the Prototype Class.

“As soon as I got in the car, we had the shifting issue so we had to pit straightaway,” Legge said. “The crew did a great job of fixing it so quickly. Once it started to rain so hard, the conditions got very difficult. Once the red flag came out, we decided to stop because we didn’t want to wreck when there was really very little to be gained by staying out. It’s very disappointing, but we ran well for two and a half hours, so we can take that going forward.”

The team will be back in action at the next race, the Mobil 1 SportsCar Grand Prix Presented by Hawk Performance at Canadian Tire Motorsports Park, northeast of Toronto, Ontario, Canada. Qualifying will be live on IMSA.com Saturday, July 11 from 4:40 to 5:45 p.m. ET, with the race live on FOX Sports 1 Sunday from Noon to 3:00 p.m