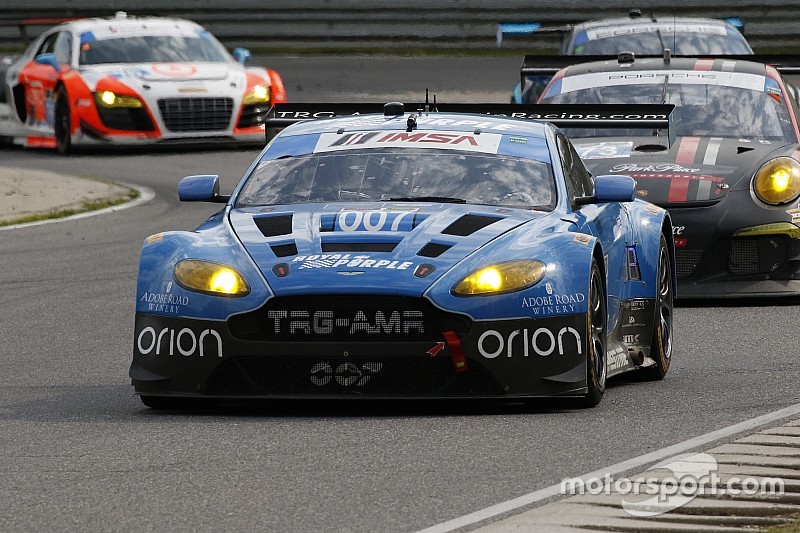 Petaluma, CA – Following an impressive performance at the Sahlen’s Six Hours of the Glen race last month, TRG-Aston Martin Racing drivers, Christina Nielsen and Kuno Wittmer, captivated the crowd in Lakeville, CT this past weekend with another incredible appearance, placing third at the Northeast Grand Prix.

To finish in third place after facing some fierce competition feels incredible,

Nielsen adds her third podium result of the 2015 season who finished in second place at Detroit and at the 12 Hours of Sebring. This will be her second consecutive podium finish at Lime Rock Park, securing Neilsen as one of the toughest GT competitors on the 1.50-mile course.

“To finish in third place after facing some fierce competition feels incredible,” exclaimed Christina Nielsen, TRG-Aston Martin driver. “The entire team worked tirelessly together to push us through the finish line; we needed a strong run this weekend and we did it. I couldn’t be more proud!”

Nielsen finished as the darling of the race, who knocked on many competitors’ doors throughout her stint and ended her day for the number 007 Aston Martin V12 Vantage in second place. Wittmer took over at the halfway mark and put in a strong performance through a series of pit stops and yellow flags, bringing the number 007 home in third.

“Christina and Kuno are a great team in and out of the car and that shined through this past weekend,” said Kevin Buckler, CEO at TRG-Aston Martin Racing. “We pushed through to a very strong finish and I have confidence in our drivers and team for an even better performance at Road America— a track in which we have a long and successful history, and one that favors the strengths of the Aston Martin GT3.”

Coming in to the Northeast Grand Prix as favorites, the TRG-Aston Martin Racing team qualified in fifth place and maintained a competitive advantage throughout the two-hour and forty-minute race. Hitting the podium after only their second race together as co-drivers illustrates the strong team chemistry between the duo.

Wittmer signed with TRG-Aston Martin Racing in early July to oversee the team’s driver development program and will remain an integral part of the team through the remainder of the 2015 season.

The 2014 IMSA TUDOR GTLM champion and 2015 Rolex 24 Hours at Daytona winner has become a great mentor for rising star Nielsen in just a short time and both are poised to stun crowds and competition at future races, including the upcoming Road America race at Elkhart Lake taking place from August 6th through August 9th.

Why Alex Job Racing is sticking with Porsche