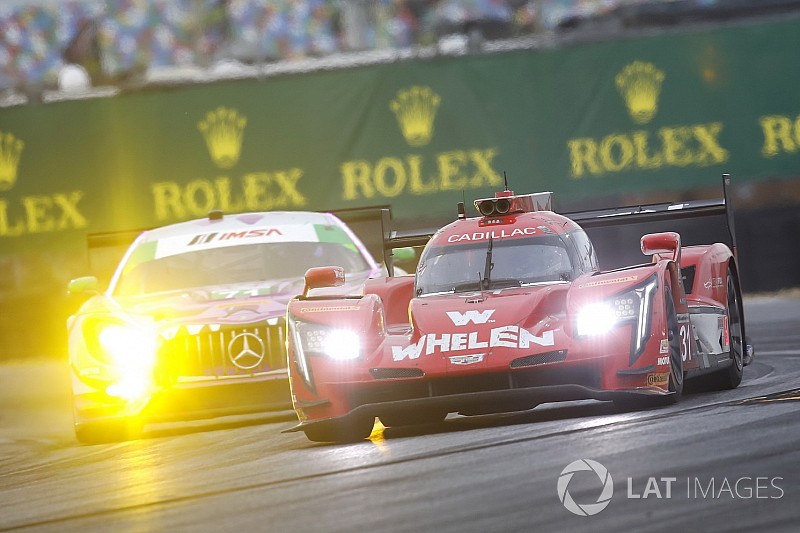 The #5 Mustang Sampling car that prevailed had pitted under the final yellow period for a cautionary top-up of fluids, to ward off an overheating issue, while the #31 machine pitted later under green for similar measures.

In the end, the #31 car finished 1m10s behind the #5, which was able to back-off substantially in the closing stages ahead of a convincing team 1-2 finish.

“I hate finishing second, but that’s racing,” said former Sauber F1 racer Nasr. “It felt like we had the car to fight for the lead from the beginning, and we made up some nice positions from the start – the car was strong enough to be fighting for the win. We had it in our hands, as well.

“But a few little issues here and there, losing some of the laps to the #5 car, but it can’t get better than a 1-2 for Action Express. It would have been nice to be a step further, but an amazing job all weekend.”

Teammate Eric Curran added: “It was just one of those races with few cautions and a lot of green-flag driving and we just had little issues.

“That was just enough to pull us back – and silly things, we had brake lights fail, so I had to come out of the lead and pit to put a new rear section on the car and lost a lap. We had a bit of a potential overheating issue with the car, which held us back just a couple of laps.

“With no cautions we were just basically behind our teammates in the #5 car for hours on end, we just couldn’t make off up the times.

“The #5 car had something happening before us, they brought their car in for preventative measures, but they got out really quick. Our car was running a little warm, the radiators get packed full of rubber and debris.

“We came in, for a preventative thing, and it was too bad because it dropped us back three or four laps on that one service. Just little things can knock you back.”

Nasr also suffered a puncture and an incident during the night which resulted in a clash with the Penske-run Acura of Helio Castroneves, which had also been in contention for the win.

“It was through the night, just after a restart, and we had a bunch of prototypes together and I just felt a clip from behind and I lost the car to the inside coming out of Turn 3,” Nasr explained.

“Helio unfortunately came over and clipped my front splitter, and I guess it damaged his car as well, so I guess his was damaged at the time also.”