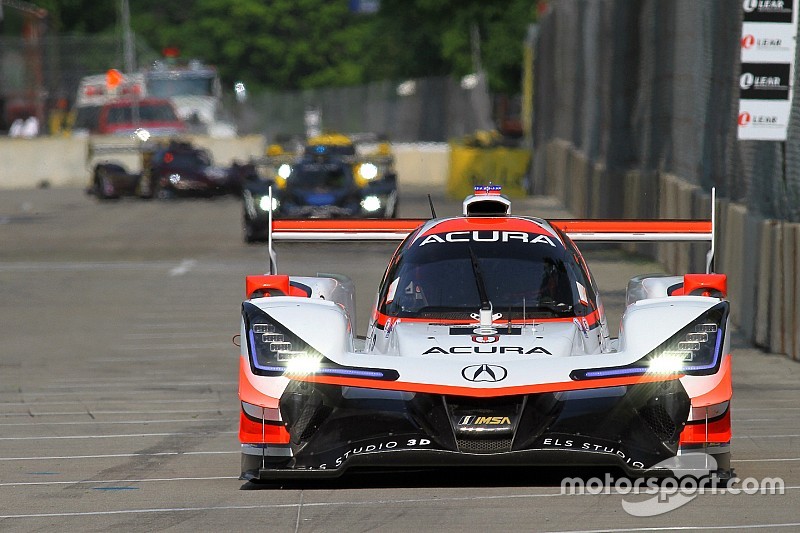 Montoya, who together with Dane Cameron won the previous round at Mid-Ohio, lapped the 2.35-mile Belle Isle course in 1min19.373sec, clinched pole ahead of fellow Acura ARX-05 driver Castroneves by 0.207sec, despite Helio’s best effort leaving him marginally quicker in Sector 1.

A late effort from Jonathan Bomarito drew the #55 Mazda RT24-P to within 0.4sec of Castroneves and 0.587sec off pole, but saw him edge the #31 Action Express Cadillac DPi-V.R of practice pacesetter Pipo Derani by 0.031sec.

Derani was a quarter second clear of AXR teammate Joao Barbosa, while Renger van der Zande will start the Chevrolet Classic from the outside of the third row in the Wayne Taylor Racing Cadillac.

Tristan Nunez was a surprising half-second slower than Mazda teammate Bomarito, but that still kept him clear of the two JDC Miller Motorsports Cadillacs and the Juncos Racing Cadillac which was piloted by junior open-wheel star Victor Franzoni.

However, later in the evening it transpired that the BMW was not compliant with camber regulations when it reached post-qualifying tech inspection and the Foley/Bill Auberlen-driven car will start from the back of the grid. Thus Robichon and Pat Long will start from pole.

These two cars were 0.4sec clear of the two Acura NSXs of Christina Nielsen and Trent Hindman, while Richard Heistand and Frankie Montecalvo were fifth and sixth in the two AIM Vasser Sullivan Lexus RC Fs.

Ryan Hardwick in the Paul Miller Racing Lamborghini Huracan landed seventh ahead of the McLaren 720S of Matt Plumb which was fixed after this morning’s shunt.

Parker Chase in the Starworks Audi R8 had a suspension issue and had to pit again, and when the pitcrew touched the car, he was consigned to the back of the pack.

Because this is only a Sprint Cup race, rather than a round of the overall GTD championship, the Moorespeed Audi, the Pfaff Porsche and the Riley Mercedes-Benz are all absent. Regular Riley driver Ben Keating is preparing for the Le Mans test on Sunday, driving the GTE Am Ford GT.

Had Park Place not entered – borrowing Robichon from Pfaff in place of Patrick Lindsey who is on Le Mans duty – this would have been the first topline IMSA sportscar race without a Porsche since 1971.