The three day event marked another opportunity for the team to generate new data and familiarity with the new Ford EcoBoost power plant.

Daytona Beach, Fla. – With a new set a rules and technical regulations, a brand new Championship to prepare for, and a new Ford EcoBoost motor to continue to develop and learn about, Michael Shank Racing with Curb/Agajanian had a big to-do list for the 2014 Roar Before the 24 this weekend at Daytona International Speedway. 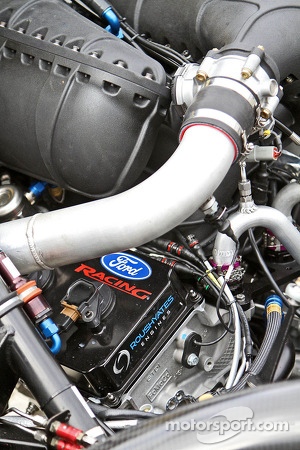 Michael Shank Racing with Curb/Agajanian drivers John Pew, Ozz Negri, Justin Wilson, and AJ Allmendinger were on hand as the team revealed yet another distinctive new livery as part of the ongoing partnership with AERO Paints as well as new commercial partnerships with Roberts Services Group, CRC Chemicals, and Curb Records.

The three day event marked another opportunity for the team to generate new data and familiarity with the new Ford EcoBoost power plant that is set to debut in the 2014 Rolex 24 At Daytona on January 25-26.

The team had to contend with a huge variance of weather, as cold temperatures eventually gave way to more mild conditions.

“Every lap we had, we were able to learn something this weekend,” said team owner Mike Shank. “We’ve had great support from everyone at Ford and it was a productive test. We know we’ve got more work to do, and being down here was a good way to keep pushing on this learning process with this package. It was good to get warmed up for the 24, and having this great line up of (Pew, Negri, Wilson, Allmendinger) drivers makes a huge difference. My guys have been working their tails off, and we have more to do before we come back but we have our plan in place and will just keep working away at it.”

Michael Shank Racing with Curb/Agajanian will return home to Ohio to complete preparations for the 2014 Rolex 24 At Daytona and return to Daytona International Speedway on January 23-26.

John Pew: “It was good to be back in the race car, in the Ford EcoBoost twin turbo. The car was awesome, we are very close to where we need to be. We quit a little early to do a little extra work back at the shop, but all four drivers feel good about the car. I can't wait to come back for the 24.”

Ozz Negri: "It's always great to be back at Daytona and to be back with the team. We have incredible potential. We are working on a few items that need to be addressed and I'm really looking forward to coming back here for the race.”

AJ Allmendinger: “It is always good to come back here. To be able to hang out with all of the guys, with Ozz and Justin and John and everyone else. I think the positives are that when we are running it is really fast. But there is going to have to be a lot of work done in the next few weeks to make sure the endurance part of it is there. I feel confident that we will have the speed to go out there to compete.”

Justin Wilson: “It's great to get back in the car, this was the first time in about four months I think, so that is always good. The car feels good. I love the sound and the feel of the new Ford EcoBoost engine, it's a lot of fun to drive. I'm just looking forward to the race now. We will get a few more miles in and we have a lot of work to do but everyone is working hard and it is fun to be a part of this group. We’ll be back in a few weeks and hopefully we have a shot at getting another Rolex."