2012 Rolex 24 At Daytona champions Ozz Negri and John Pew will both be in action for the team at the test.

Pataskala, Ohio – Just weeks after setting multiple records at the track, Michael Shank Racing will return to Daytona International Speedway next week as the team takes its first official steps in the IMSA TUDOR United SportsCar Championship in testing on Tuesday and Wednesday. 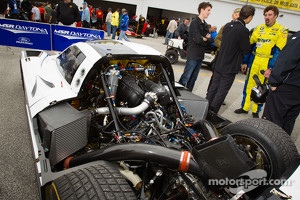 2012 Rolex 24 At Daytona champions Ozz Negri and John Pew will both be in action for the team at the test, driving the No. 60 Ford Ecoboost-powered Riley on the 3.56-mile circuit that will play host to the opening round of the 2014 season on January 24-6.

The duo is looking forward to their first laps with the new 2014 specification Daytona Prototype as the two-day test is set to provide Michael Shank Racing with a baseline of information ahead of the new season.

The test should be a valuable opportunity for Pew and Negri to not only become acclimated to the new aerodynamic configuration on the Riley, which features a new wing, diffuser, and tunnels as well as new components for the brake package with the debut of carbon brakes in DP.

Also on the list for the team will be learning about an exciting all-new component in the form of the record-breaking 3.5-liter Ford , V6 motor.

The motor powered Michael Shank Racing to a record lap on the Daytona oval with an official speed of 222.014 mph last month. While the outing was a great demonstration of what the new powerplant is capable of, there is a lot yet to be learned as the move to the new motor adds another channel of development for the team to take on.

“My guys have been working really hard to get the car ready for Daytona,” said team owner Mike Shank. “With a new motor and so many new parts for the aero side, we have a huge list of things that we want to try and learn about next week.

It is a really exciting time and even though it is some long days for us to be ready, what we do here these next few weeks will pay off all year long. We’ve also been working on our partnerships and plans for the year, and we can’t wait to get everything finalized and make some announcements in the coming weeks.”

Action Express with Bourdais fastest on day 2 in Sebring test