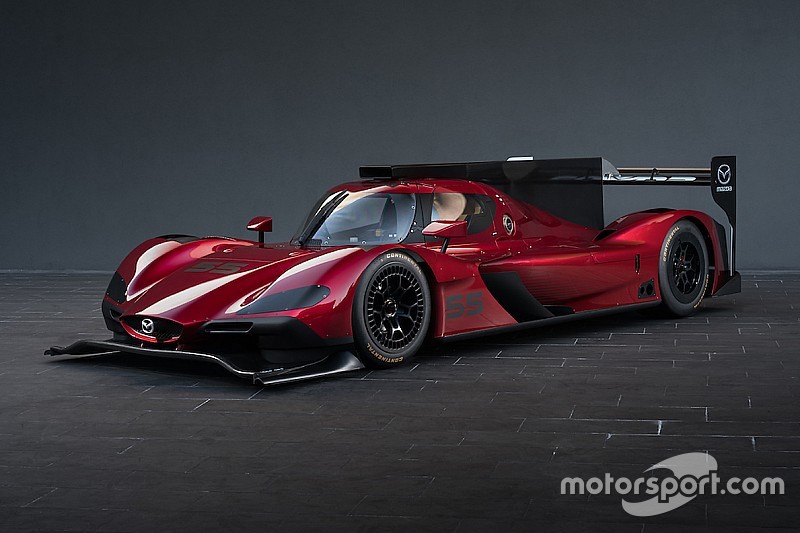 The RT24-P with which Mazda will be gunning for the IMSA WeatherTech SportsCar Championship next year was unveiled today at the LA Auto Show.

The Riley Mk.XXX chassis, developed by Riley Technologies and Multimatic Motorsports, will be powered by the Advanced Engine Research-developed Mazda MZ-2.0-liter turbo engine, developing around 600hp.

But the big story is the bodywork, created by Mazda designers following the company’s ‘KODO – Soul of Motion’ design philosophy. This, according to Mazda, “represents the instant that energy becomes motion, such as the muscular beauty as an animal pounces or a human leaps into action.”

Ken Saward, senior manager of design at Mazda Design Americas, stated: “KODO design is at the heart of any vehicle that carries a Mazda badge, and that is very evident in the design of the 2017 Prototype.

“We considered the two main parameters of designing a successful racecar for this series – aerodynamic performance and the new-for-2017 technical regulations. Working with Multimatic’s aerodynamicist and engineers, we discovered that applying the KODO design philosophy to the surfaces and the silhouette of the car enabled us to create a dynamic, purposeful-looking design and a very aerodynamically efficient one.”

Florida-based SpeedSource Race Engineering will again manage the team, and will be the first outfit to test the Riley Mk.XXX later this month.

John Dooonan, director of Mazda Motorsports North America, said: “This is a huge moment for Mazda Motorsports and the entire Mazda family. To have a car which features Mazda design language at the top level of our motorsports program is meaningful for us as a brand.

“We believe we have the right team, the right drivers and the right chassis to win races and championships.”

Mazda took three pole positions in 2016 with the venerable Multimatic-developed Lola, but scored just one podium finish, resulting in seventh and eighth in the Drivers’ championship, sixth and seventh in the Teams’ championship.

Doonan continued: “Mazda has good, long-standing relationships with Riley and Multimatic and is happy to be the first to test their new chassis. We look forward to seeing it make its racing debut at Daytona with Mazda bodywork and the Mazda MZ-2.0T engine.

“The strategic vision of IMSA to give auto manufacturers this opportunity to integrate our branding – to better engage our passionate fans – is unique and we’re proud to be the first to unveil what is possible.”

The RT24-P name is a reference to the Mazda Road to 24, the brand’s driver development program that provides scholarships to take the best drivers from grassroots racing to the top level of sportscar racing.