DAYTONA BEACH, Fla. – Mazda has been named an official automotive partner of the International Motor Sports Association (IMSA) and will have a strong presence throughout the 2014 TUDOR United SportsCar Championship. Mazda is fielding a two-car prototype effort utilizing its latest SKYACTIV-technology in the TUDOR Championship, and will have multiple teams racing Mazda MX-5s in the Continental Tire SportsCar Challenge. 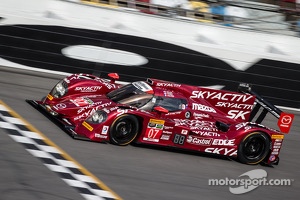 Mazda will be the presenting title race partner when the TUDOR Championship and Continental Tire Challenge comes to its home track, Mazda Raceway Laguna Seca, in May, as well as returning for the season finale Petit Le Mans powered by Mazda at Road Atlanta. The manufacturer will have a strong consumer presence to tie its racing activities to its street cars at the majority of the races, with new car displays, racing simulators and the ability to link fans’ passions for the sport to their social media channels.

Prior to the Rolex 24, Mazda kicked off an innovative educational program that will visit high schools prior to each race of the TUDOR Championship. The Mazda Racing Accelerates Creative Education (R.A.C.E.) program is designed to motivate and engage the next generation of STEM (science, technology, engineering and mathematics) superstars.

Mazda has a long history with IMSA, having dominated the GTU class in the 1980s. The Mazda RX-7 became the first car to score 100 IMSA GT wins. In recent years, Mazda has raced in both GRAND-AM and the ALMS, scoring manufacturers’ championships with both organizations. Most recently, the company won the 2013 GRAND-AM Rolex Sports Car Series GX championship with its Mazda6 SKYACTIV-D Clean Diesel.

“We are thrilled to be a part of the new TUDOR Championship and what it means for the future of sports car racing in North America, said John Doonan, Director of Motorsports, Mazda North American Operations. “Racing under the IMSA umbrella is very special for us, as Mazda and IMSA grew together in the 1970s and '80s, and 2014 brings us officially back to our roots of racing here in North America. Mazda fans love IMSA and IMSA fans love Mazda. With our R.A.C.E. educational outreach program we are working to grow the next generation of sports car fans.”

This weekend’s 52nd Rolex 24 At Daytona is the inaugural race of the TUDOR United SportsCar Championship and the Tequila Patrón North American Endurance Cup.