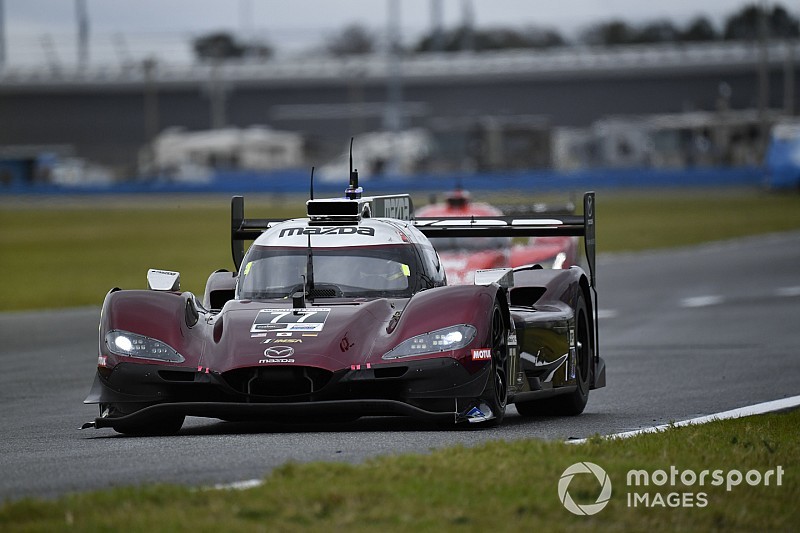 The Mazdas were shockingly fast in the Roar Before the 24 test, and in second practice Tincknell saw co-driver Jonathan Bomarito set a lap 0.711sec clear of the field.

Asked if the test pace had been as encouraging as it appeared, Tincknell replied: “Yeah, we ran through the program really well. We were very fast, reliable, really good test.

“Obviously there have been a few changes over the winter – more support from Multimatic [which built the Riley chassis the RT24-P is based on], updates on the engines from AER, some personnel changes within Joest, and sometimes these things take a while to jell. But to be fair to everyone, it was really seamless.

“The car’s really well-prepped. I know the program is in its third year but I see this as the second year, really, of the new Mazda Team Joest. We’re here to win races and compete for the championship, and the Roar showed we have a package that can do that.”

Tincknell said that MTJ’s new-found prominence was a result of both improved organization within the squad but also significant upgrades to the car.

“Going into the second year of Mazda Team Joest, everything is much more refined,” he commented. “We’re not running around plugging in engines the night before a test or anything like that.

“The car has had a year of development, but also there have been huge changes in the packaging of the car, to the suspension and the engine. I’m really impressed with the changes. You might think it would take longer to get up to speed and for everything to operate in a relaxed atmosphere, but the boys have worked so hard, credit to them. We arrived at the Roar with our ducks in a row and we were fast.”

The 27-year-old Briton admitted that the two Mazdas’ advantage over the competition is unlikely to be as large as seen in the early-January test days, but remained optimistic the RT24-P is still a strong force that won’t be penalized by IMSA’s Balance of Performance adjudicators.

He said: “We were a second up in [Roar] qualifying. Is that realistic? Of course it’s not. But we can only beat what’s in front of us. It won’t be long before we find out where we truly are.

“I can only speak for ourselves. We were pushing hard, we know we’ve made improvements, we are making steps forward. But we don’t expect to be a second clear of a quality field, when you look at the teams and drivers involved. But we expect and hope to be still right at the front with a good chance of winning races.

“There have been no BoP changes, so I guess it will all come out in the wash over the next few days with exactly where everyone’s at, but it’s great that there were no changes. Sometimes you can push in a test and get a slap on the wrist for it, so it’s great it that IMSA showed you can develop the car and not have to worry about the BoP.”

While the Mazdas have been fast, they noticeably improved in reliability over the course of last year, culminating in a 2-3 finish at Petit Le Mans. Tincknell believes the RT24-P’s dependability has taken a further step since then.

“Don’t get me wrong, it’s a tough race reliability-wise,” he said. “The engine is really singing for a long way round the circuit. But we did a good endurance test here in December, a few little niggles have been improved upon and shouldn’t happen again.

“I was only looking at the results [of 2018] a couple of days ago and fourth was like four laps down and one second off the pace. So everyone is in the limit on reliability around here, everyone will be pushing like hell.

“But I think we’re in a completely different stratosphere compared to where we were last year. I’m anticipating a very strong showing.”