DAYTONA BEACH, Fla. – Corvette Racing and SRT Viper are ready to square off for the first time in more than a decade in the 52nd running of the Rolex 24 At Daytona, which opens the TUDOR United SportsCar Championship on Jan. 25-26. This weekend, both teams are testing in the Roar Before the Rolex 24 in preparation for that showdown.

Antonio Garcia, the 2009 Rolex 24 winner who will co-drive that car along with Ryan Briscoe, cautions not to count out any of the competitors in GTLM.

“It’s not only Corvette and Viper,” Garcia said. “I think everybody else will be there – with BMW, Porsche, Ferrari and Aston Martin. We can’t forget about any of the factories here. We are all very strong, as we showed last year in the ALMS. I think the completion will be real hard this year in the TUDOR Championship.” 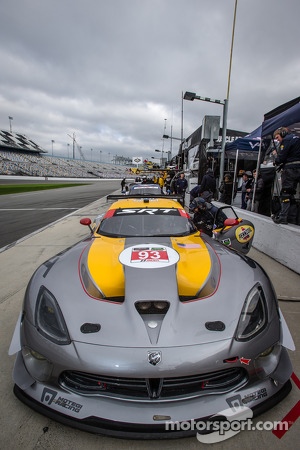 “What we do in the Roar is very important towards the race,” Garcia said. “So far, we’re running according to plan, to get as much information that we can to be prepared for the race.”

The Corvette and Viper teams last faced each other in the Rolex 24 in 2000, when an SRT Viper fielded by the French ORECA team took the overall victory by 30.879 seconds over Corvette – the closest finish in event history at that time. Corvette Racing won overall in 2001, its last factory appearance in the event.

“It’s going to be a great show,” said Jonathan Bomarito, who co-drives the No. 93 Pennzoil Ultra SRT Viper GTS-R with Kuno Wittmer and Rob Bell, fourth fastest in practice with a lap of 1:46.310 (120.553 mph). “We’re still trying to get used to the differences in the cars and classes. I’ve won here before, but this is the first time here for SRT as a team with the Viper GTS-R. I know this class will be a good battle again, and we’ve got as good a shot as anyone. The guys are doing a great job, and we’re going to go for it.”

BMW Team RLL is competing at the Rolex 24 for the first time, with a two-car lineup including IndyCar regular and 2012 Rolex 24 At Daytona winner Graham Rahal – son of team owner and 1981 Rolex 24 winner Bobby Rahal.

“We need a little power to be competitive with the Corvettes, Vipers and Porsches, but we’ll do OK,” Rahal said. “We’re going to focus on the strengths of the car and improve it, and see if we can find some time in the infield to make up for it. It’s been a busy couple of days, but it’s nice to get back in the BMW Z4. For me, this test is vital, because I haven’t driven a GT car here in years. The more time I can get behind the wheel the better.”

Jan Heylen led competitors in the GT Daytona (GTD) category, running 1:48.228 (118.417 mph) on the final lap of the afternoon session in the No. 58 Snow Racing Porsche 911 GT America co-driven by Madison Snow and Marco Siefried.

“We have been making good progress on the setup for this new Porsche 911 GT America over the last two days,” Heylen said. “All the drivers have been with a few tenths of each other as we work on brake balance, suspension adjustments, and get used to the new paddle shift. In the end, my fast lap was a combination of a rare clean lap with no traffic problems, and our weekend setup progress.”

Norbert Siedler was second fastest with a lap of 1:48.253 (118.389 mph), set during the night session in the No. 71 Park Place Motorsports Porsche 911 GT America co-driven by Jim Norman, Shane van Gisbergen and Craig Stanton.

The final day of Roar Before The Rolex 24 testing begins at 9 a.m. ET with a Continental Tire SportsCar Challenge session. The TUDOR Championship machines return for the first of two Sunday sessions at 10:15 a.m.