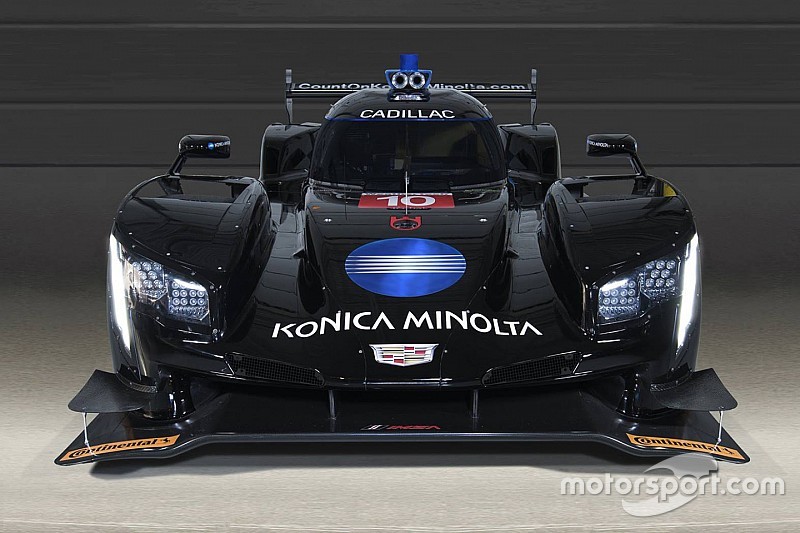 The new Cadillac Prototype in which Jeff Gordon will join Jordan Taylor, Ricky Taylor and Max Angelelli at Daytona, has been revealed in its Konica Minolta livery.

Said Taylor: “I’m really impressed with what I’ve seen so far on the track. It’s a car I really feel like we can go out and win a championship with, so perhaps we can go out and take care of that unfinished business sooner than later.”

Younger son Ricky Taylor said: “The car has been a completely different experience from anything I have experienced in my career. Even in comparison to driving the Morgan LMP2 at Le Mans a few years ago, this car is light years ahead.

“The car generates downforce in a completely different way and gives the driver a lot of confidence in high-speed corners.

“Everyone at Dallara, Cadillac, and Wayne Taylor Racing has put in an incredible amount of effort into this project, so I am looking forward to getting on track and seeing how we stack up against the others.”

Added Jordan Taylor: “We picked up speed every time we tested while we worked really hard to see how the car would react to different situations. It’s definitely a much different car than what I’m used to.

“The DP that we’re used to is big, it’s heavy, and it moves around a lot. The Cadillac DPi-V.R is much more aero-based, like an LMP2 car. In terms of driving style, it feels a lot different so we spent a lot of time just trying to get comfortable. It’s also been a huge effort for the team to learn how it works. Thanks to our partners at Cadillac and ECR and Dallara, all of whom know what these kinds of cars are supposed to do, it’s really accelerated the process.”

NASCAR legend Gordon, who is due to make his first Rolex 24 Hours start since 2007, said: “It was great to get back behind the wheel of a car that had that kind of downforce and braking – it’s probably been since I drove the Formula 1 car at Indianapolis in 2003 that I felt anything like that.

“The Cadillac DPi-V.R is a beautiful car. I really enjoyed working with Ricky and Jordan and Max and Wayne and the whole team to get fitted into the seat, get up to speed and get comfortable.

“It’s been a while since I’ve been on [Daytona] road course and obviously the cars and the technology and the speed have advanced since then. I can’t wait to get out there on track and feel it out and get up to speed.

Brian Pillar, WTR’s technical director, commented: “We planned a very aggressive testing calendar that focused on building reliability. Then the focus was to be shifted to performance development once we arrive at Daytona for the first time. I am now finally getting excited to tune my new toy during the December test and truly appreciate its potential.

“The simulation data is always interesting, but sometimes an engineer must live vicariously through the excitement of his drivers. It really motivates me to hear them say the limits aren’t known, yet, and I can’t wait to hear them describe how incredibly quick the car is through the ‘Bus Stop’ [Daytona road course’s Turns 8 through 10].”