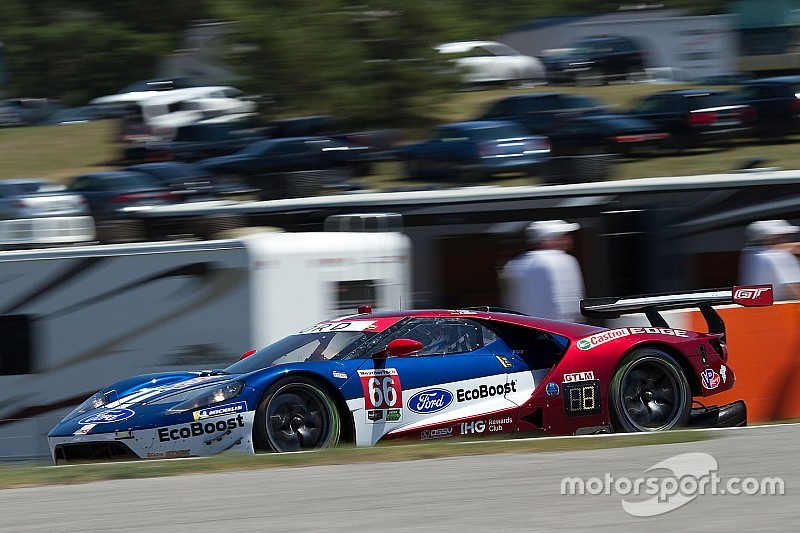 The Ford GT of Joey Hand and Dirk Muller grabbed IMSA victory at Lime Rock after pressuring Jan Magnussen into a mistake in the dominant Corvette with under 15 minutes to go.

Antonio Garcia’s polesitting #3 Corvette held the lead fat the start over Laurens Vanthoor in the #912 Porsche, while the second Corvette of Tommy Milner beat Muller’s #66 Ford to grab third.

A yellow-flag flew immediately for a GTD collision, and while the restart saw the order remain static among the leaders, John Edwards slotted his BMW M8 ahead of the second Ford of Richard Westbrook, and the second BMW of Connor de Phillippi and Patrick Pilet in the #911 Porsche.

Before Lap 30, however, Westbrook had passed Edwards for fourth and set about trying to close what was now a six-second deficit to teammate Muller. Instead, Muller kept the gap static and instead started pressuring Milner’s Corvette for third.

Through GTD traffic, just past the Lap 30 mark, Garcia pulled away from Vanthoor to establish a near-4sec lead, although this would fluctuate according to the cooperation of the slower cars.

Following the first stops, the first two remained in place, #3 Corvette ahead of #912 Porsche, but with JMagnussen and Earl Bamber now in their respective cockpits. Now their nearest pursuers were the two Ford GTs, with Hand and Ryan Briscoe now ahead of the second ’Vette, which now had Oliver Gavin at the wheel.

Magnussen pulled in from the lead on Lap 106 but Bamber made a costly error as he sped up before his pitstop, running off course. The Porsche drivers’ issues were compounded when a faulty wheelgun stretched the pitstop so long that he rejoined in fourth.

Tandy in the other Porsche lost second place to Hand’s Ford GT with 45mins to go, just before he stopped, which allowed his teammate into the final podium spot, 2sec ahead of Gavin’s #4 Corvette, but 18sec behind Hand who in turn was almost 10sec behind Magnussen.

However, Hand started slicing into the leader’s advantage, although once the gap came down to 5sec with half an hour to go it stabilized. When Hand tagged the Magnus Racing Audi as he tried to lap it, he dropped back to 8sec behind the leader.

He then regrouped and charged again. Into traffic with 25mins to go, Magnussen was also having to contend with Tandy trying to unlap himself, something the Dane grudgingly allowed to happen, allowing the Porsche driver a chance to chase after Briscoe’s fifth placed #67 Ford.

It also meant that Magnussen’s mirrors were now full of Ford GT with 15mins to go, and two minutes later the Corvette went briefly off the road at the final turn and Hand was through and gone.

Magnussen would cross the line 11.4sec behind the new leader and only 2sec ahead of Bamber. Gavin took a solid fourth, but Tandy elbowed his way past Briscoe with two minutes to go to snatch fifth.

Behind, there was an incident on the opening lap when the #93 Acura NSX of Lawson Aschenbach went off track as a result of contact from the #96 Turner Motosports BMW M6 of Bill Auberlen and then rejoined and collected Auberlen.

As Long stretched his lead at the head of the field to 20sec, Sellers moved his Huracan ahead of Baumann and swiftly homed in on the other Lexus of Hawksworth but he gained second when the #15 Lexus went off-strategy and pitted at the end of Lap 41.

All of the cars had stopped by Lap 51. Long handed off to Christina Nielsen, and she emerged second behind Hawksworth but 4sec ahead of Madison Snow (replacing Sellers) who swiftly passed Nielsen. The #14 Lexus had a horribly slow stop, so Kyle Marcelli joined at the back of the field.

On Lap 79, as Hawksworth made his second of three stops and dropped to the back of the field, before working his way back to the front as the others stopped. The Briton then made his third stop and handed over to Mario Farnbacher with under an hour to go.

By now, Long was back at the wheel of the Wright Motorsports 911 and was up into second, but 26sec behind Snow’s PMR Lamborghini, and barely able to stay ahead of Andy Lally’s Magnus Audi R8.

Lally finally got ahead of Long for second place with less than 30mins left on the clock, and with 20mins to go Long ran wide, struggling with rear grip, allowing Alvaro Parente in the #86 Acura, Gunnar Jeannette's #63 Ferrari and Farnbacher ahead.

Jeannette snatched third from Parente in the last five minutes, while Jeroen Bleekemolen in the #33 Mercedes and Marcelli also deposed the fading Long in the closing stages.

Magnussen: “Hard to swallow” losing win with late off