The Northeast Grand Prix was brought to a premature halt by lightning in the area, with Jordan Taylor and Antonio Garcia heading a Corvette 1-2 in GT Le Mans and Heart of Racing’s Aston Martin Vantage topping GT Daytona.

The Corvette C8.Rs of Jordan Taylor and Tommy Milner held their 1-2 grid positions at the start of the race, with Cooper MacNeil running 3.5sec adrift in the WeatherTech Racing Proton Porsche. However, after half an hour, the two Corvettes were 2.5sec apart and the 911 RSR was a further 20sec adrift.

MacNeil handed off to Mathieu Jaminet on Lap 41, while Milner and Taylor stayed onboard their C8s when they stopped on Laps 42 and 43 respectively, with around two hours left to run. Jaminet emerged around 40sec behind the lead Vette but immediately started trimming that gap down. By Lap 62 / 1hr45min to go, Jaminet was only 30sec behind, and Milner was only 1.5sec behind Taylor.

That lead gap had stretched to 4.5sec by the time the Porsche and the #4 Corvette stopped again on Laps 90 and 91 respectively, with Nick Tandy replacing Milner in the cockpit. Next time by, Taylor pitted to hand off to Antonio Garcia, and once he was up to speed, the #3 car was nine seconds clear, while the #4 Corvette was ‘only’ 20sec ahead of Jaminet’s Porsche.

Then with 70mins to go, the race was halted due to lightning in the area. With 30mins required between lightning and a restart, and a hard curfew of engines off by 6pm in the area, IMSA eventually had no option but to replace the red flag with checkered. 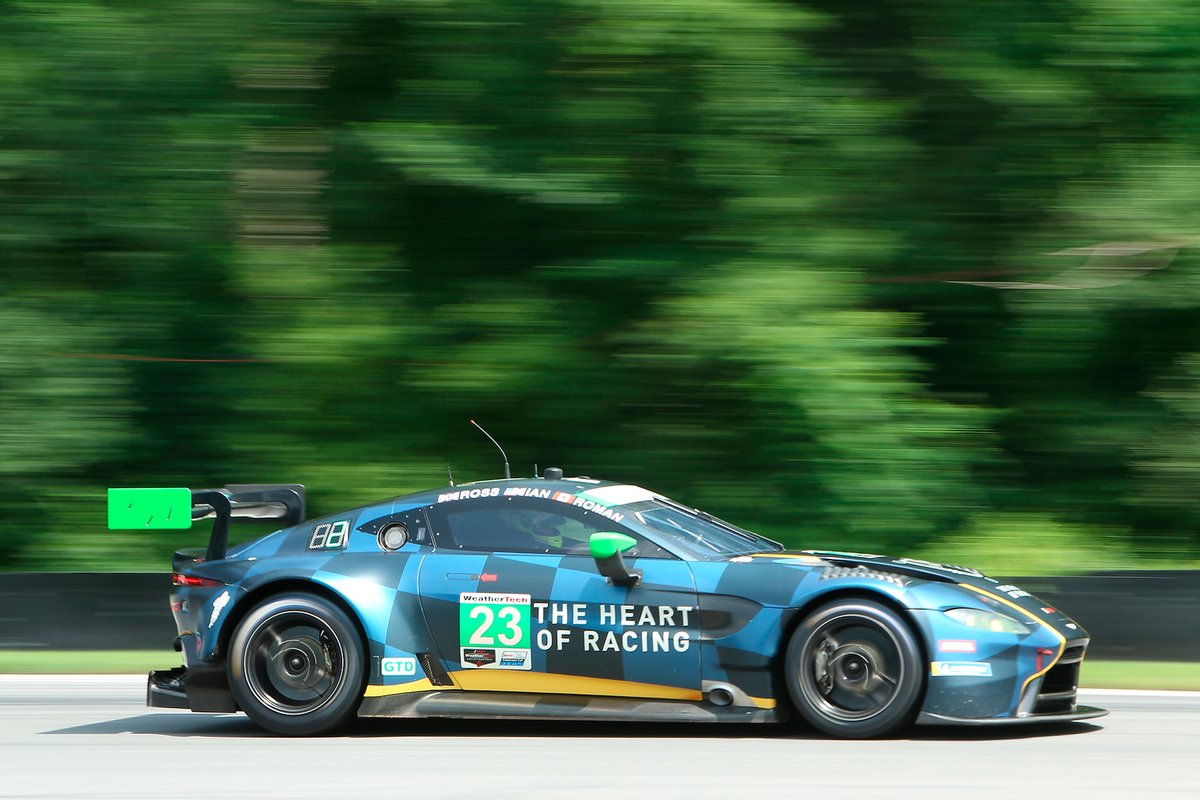 Roman De Angelis kept the Heart of Racing Aston Martin Vantage clear of Aaron Telitz’s #14 Lexus RC F at the drop of the green, with Richard Heistand’s Carbahn Peregrine Audi R8 in third ahead of the second Lexus.

Snow and Trent Hindman in the Wright Motorsports Porsche 911 were the first of the lead runners in class to stop, on Lap 45, going off-sequence compared to their rivals. De Angelis and Telitz – the latter of whom had been holding up a train of cars – left it another five laps before pitting. That triggered most of the remaining runners to stop.

PMR’s tactics paid off well: De Angelis had handed over to Ross Gunn, and when he emerged from the pits, he found his mirrors full of Snow’s Lamborghini, which had jumped the #14 Lexus, which was now occupied by Jack Hawksworth. Turner and Pfaff left it until Lap 55 to pit, and swap out Foley for Bill Auberlen, and Robichon for Laurens Vanthoor, respectively.

So the Aston Martin was back at the head of the field again, and once his tires were up to temperature, Gunn pulled away from Snow who was working hard to hold off Hawksworth. Some 11sec further back, Vanthoor and Auberlen ran fourth and fifth ahead of Jeff Westphal who’d replaced Heistand in the Peregrine Audi. Hindman’s Wright Porsche ran seventh until being passed by Franck Perera in the GRT Lambo.

That was the order when the race was brought to its premature halt.