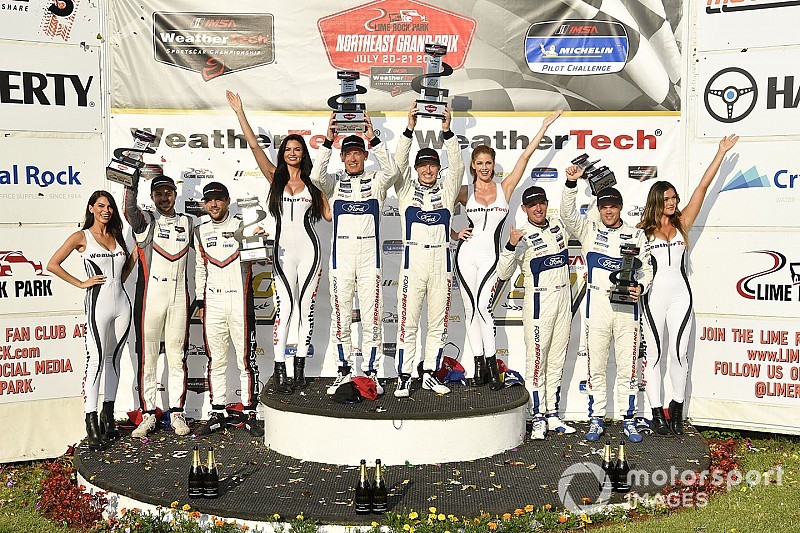 The Porsche 911 RSRs of Laurens Vanthoor and Nick Tandy retained their advantage at the start of the race ahead of Connor de Phillippi in the #25 BMW M8, Dirk Muller’s Ford GT and the two Corvettes C7.Rs of Antonio Garcia and Oliver Gavin.

Positions stayed the same until on Lap 39 Muller passed De Phillippi for third by which time the Porsches were 7sec up the road. Almost immediately afterward, John Edwards pulled the other BMW into pitlane, Briscoe did the same with the #67 Ford, and Gavin halted the #4 Corvette to hand over to Marcel Fassler.

On Lap 44, De Phillippi gave up the fourth-placed BMW over to Tom Blomqvist, and next time by Garcia halted too and Jan Magnussen took over. Both Corvettes lost out to Briscoe in the pitstop exchange and thus dropped to sixth and seventh.

Vanthoor pitted the #912 on Lap 50 to cede his seat to Earl Bamber, and Tandy pitted next time by to give the wheel to Patrick Pilet. Tandy’s in-lap and a slick pitstop put Pilet just in front but Bamber regained the lead – the pair of them now under pressure from Briscoe. Running long had not served the #66 car well, and it fell to seventh.

However, Hand passed both Corvettes by Lap 75 with more than 90mins still to go. He swiftly homed in on Blomqvist’s BMW with was running 20sec behind the two Porsches and the lead Ford. Hand moved into fourth on Lap 83, leaving Blomqvist to soak up pressure from Magnussen.

Fassler stopped the Corvette and stayed on board on Lap 91; Briscoe handed over the #67 Ford to Westbrook a lap later. Westbrook on fresh tires slashed into the advantage of the Porsches. On Lap 111, Pilet fell off the track at Big Bend, falling 5sec behind leader Bamber and immediately pitted. So too did Hand, while Westbrook got past Bamber for the lead. Bamber pitted but emerged right behind Pilet and only just ahead of Hand’s Ford.

Meanwhile, Westbrook in the lead had to lay down fast laps to see if he could emerge from his third and final stop still in the vicinity of the Porsches. Fassler currently running second in the #4 Corvette, could help Ford win if he held up Pilet, and that's exactly what happened.

With Pilet unable to find a way around the Corvette, Westbrook pitted with a 41.6sec lead. He emerged behind the two Porsches but only 1sec off Bamber and 2sec behind Pilet – and the Ford had fresher tires. Fassler, meanwhile, fell off the track and pitted to hand the #4 Corvette back to Gavin. That and a slow stop was enough to drop the car to seventh.

Pilet made another mistake at Turn 7 on Lap 147, losing the lead to Bamber and that allowed the #912 to stretch away in the lead as the #911 now was holding up the Fords of Westbrook and Hand. Under this intense pressure, Pilet ran wide trying to lap GTD cars and was zapped by Westbrook and Hand.

Westie set to work on the 2.8sec deficit to Bamber, and halved it within two laps; two laps later it was down to 0.6sec, but Dennis Olsen’s GTD Pfaff Porsche got in the way of Westbrook and the gap went back out to over two seconds. However, the Ford driver reeled him in yet again and within only two laps he was applying the pressure once more, rubbing up against it. The pair were trading paint with 10mins to go, but with six to go Westbrook muscled past and into the lead and pulled away.

Indeed, Hand fell only half a second short of making it a Ford 1-2, as a downbeat Pilet came home 26sec in arrears although a similar distance ahead of Garcia in the #3 Corvette. Gavin and De Phillippi were a lap down, Edwards two laps down.

The Paul Miller Racing Lamborghini Huracan of Corey Lewis fell off the road on Lap 6, pitted for fuel and a checkup and departed just before Hindman could put him a lap down. Seefried was the first of the frontrunners to pit. Before their first stops, Robichon would get around Foley for third. Meanwhile the #14 Lexus was pushed behind the wall with gear selection issues.

The first round of stops saw Jeroen Bleekemolen move the Riley Mercedes into the lead, with Seefried’s early stop initially paying off so that he jumped early leader Hindman – replaced by Mario Farnbacher in the MSR Acura – but Farnbacher moved into second, and Dennis Olsen who had exited the pits in fourth in the Pfaff Porsche wasted little time in disposing of Seefried to gain third. Seefried soon came under pressure from Bill Auberlen now in the Turner BMW.

Farnbacher and Olsen kept gaining ground on Bleekemolen, sometimes by over one second per lap, but it was Olsen who got around Farnbacher before the Riley Mercedes ceded the lead. The man on the move was Matt Campbell whose Wright Motorsports 911 had passed Jack Hawksworth’s Lexus, Auberlen’s BMW, and moved onto the tail of Farnbacher.

Following their second stops, however, Farnbacher and Olsen emerged ahead of Bleekemolen and continued to pull away so that by Lap 120, with 50mins to go, the Mercedes had fallen 12sec behind and was struggling to hold off Auberlen’s BMW, Campbell’s Wright Porsche and Pat Long who had taken over the Park Place Porsche. Long moved past Campbell with under 20mins remaining.

In the closing quarter-hour, Bleekemolen came under intense pressure from Auberlen and Long, and with seven minutes to go, the Mercedes ran off the road and dropped to sixth. Bleekemolen would have to pit again.

More drama fell with less than five minutes to go, when Olsen ducked past Farnbacher as they were lapping Andy Lally’s Magnus Racing Lamborghini Huracan. Farnbacher tried to retaliate but fell a mere 0.01sec short of displacing the Pfaff Porsche.

Auberlen held off Long and Campbell, while Hawksworth was half a minute down in the #14 Lexus.