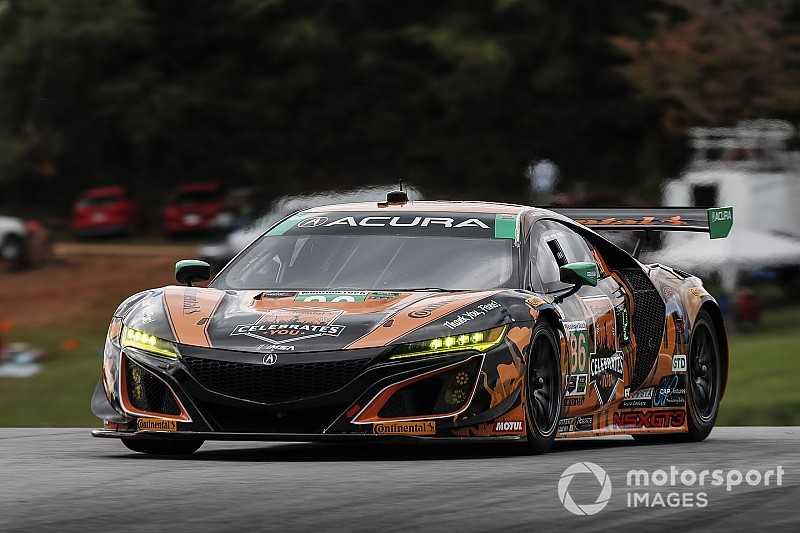 Katherine Legge says she is disappointed about failing to clinch the IMSA GT Daytona championship, but is proud of the Meyer Shank Racing team and co-drivers who helped her title quest.

Legge’s #86 Acura NSX, which she shared with regular co-driver Alvaro Parente and Trent Hindman at Petit Le Mans, finished second, less than one second behind the Ferrari 488 of GTD race winners Scuderia Corsa.

However, with Paul Miller Racing’s Lamborghini Huracan finishing in third, that was enough for Bryan Sellers and Madison Snow to beat her to the title by four points.

Legge was a ‘standalone’ in the championship because twice Parente had to miss IMSA races, and was substituted by Mario Farnbacher, including in the #86 Acura’s victory at Belle Isle, Detroit.

Commented Legge: “Congratulations to the Paul Miller team, because they deserved it at the end of the day. But I’m so proud, incredibly proud, of Acura and my MSR team. They did a phenomenal job of getting us into a position where we could win races and challenge for the title.

“Alvaro drove superbly all year long. He deserves to finish second with me, really. Trent did a great job today and the team performed flawlessly.

“I’m honestly disappointed; I wanted to win the championship so badly. But realistically, there’s nothing to be upset about. We had a great season, and a great springboard for next year.”

Legge will next year continue with Meyer Shank Racing in an all-female line-up.

For their part, Sellers commented: “I don’t know what to say. It has been a long day, and a long season. I’m happy to be here. What an emotional roller coaster.

“I’m so thankful for Paul and everyone at Paul Miller Racing. You don’t get to live dreams like this without someone like him. Madison and I had a great season. This car was incredible, and so strong. I’m very proud of all our guys and all our effort.”

Snow said it was the proximity of Legge’s Acura to PMR’s Lamborghini at Petit Le Mans that added luster to clinching the IMSA WeatherTech SportsCar GTD title.

“Going for the championship was super difficult knowing we had to finish well, based on where the #86 finished," he said.

“The last 15 minutes were definitely the most nerve-wracking. The #86 was there the whole time, and that’s what made it so special, to have that competition. We had to do this, and we succeeded.

“If we would have gone into the race knowing all we had to do was start the race to win [the championship], it wouldn’t have been as special. It’s the competition in GTD that makes IMSA so special.”

Pfaff Motorsports switches to IMSA for 2019