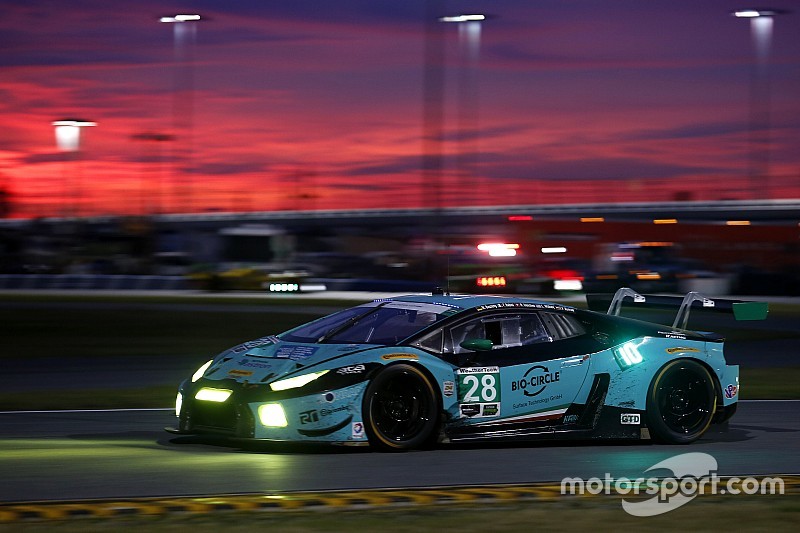 IMSA's five-minute post-race penalty on the five Huracans that raced in the Rolex 24 at Daytona has provoked a civil but frustrated response from Lamborghini Squadra Corse.

The penalty moves the best of the Huracan GT3 finishers, the Konrad Motorsport #28 entry, from 5th place down to 10th in the opening round of the 2016 WeatherTech United SportsCar Championship, but makes little difference to the results of the other four Lamborghinis.

The penalty was applied according to the Sporting Regulation Attachment 2, Paragraph 2.9, which states: Competitors and manufacturers are expected to provide valid data upon request to assist IMSA in the BoP [Balance of Performance] process, technical tool for leveling the performance of all cars. Any competitor or manufacturer who displays a level of performance beyond the expected result may be issued a penalty prior to, during, or after a race of a minimum stop plus five (5) minutes.

A statement from Lamborghini Squadra Corse, stated: “Lamborghini has collaborated with IMSA to draw up a correct BoP of the GTD Huracán: first with dyno testing of the engines, then during the “Roar” Test sessions preceding the 24 Hours at the beginning of January.

“In spite of this, the Lamborghini Huracáns GTD which competed in Daytona set the fastest lap in GTD class during the race, therefore their performance went beyond the expectations of IMSA and they received a penalty according to Attachment 2, Paragraph 2.9.

“All this happened despite the fact that all five cars respected the BoP imposed by IMSA before the 24 Hours and resulted in compliance with the technical inspections carried out by IMSA after the race, with additional dyno testing to assess the regularity of the engines.

“Lamborghini Squadra Corse offers its full assistance and cooperation to IMSA for a fair and equitable Balance of Performance for the six Lamborghini GTD Huracáns taking part in the 12 Hours of Sebring.”

Giorgio Sanna, head of motorsport at Automobili Lamborghini commented: “Lamborghini Squadra Corse has always collaborated with IMSA with maximum transparency, in order to achieve a right BoP [Balance of Performance] . We are and will be available for IMSA technicians to achieve the performance required by IMSA.

“However, we hope more FIA components and technical parameters will be used in the future to ensure a right BoP.”

Bell vows to be at Sebring, despite team crisis