Jarvis: Mazda title challenge “a step too far” in 2018 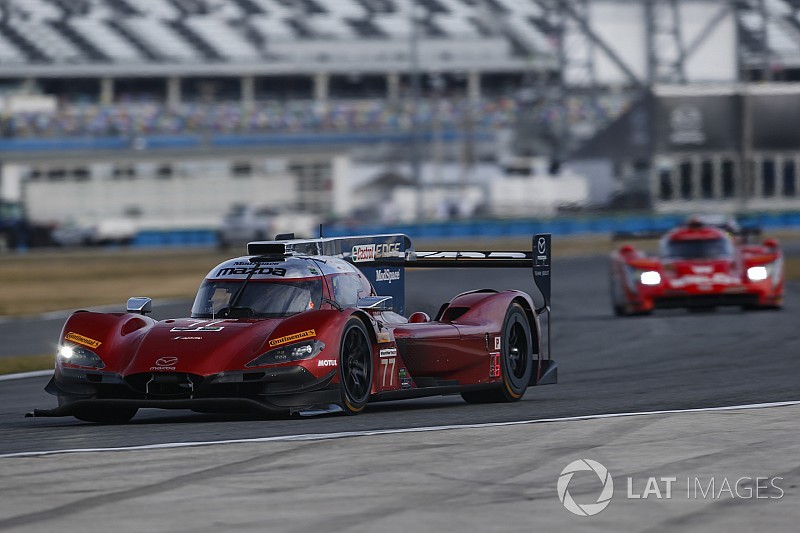 Oliver Jarvis says the relative newness of the Mazda Team Joest partnership probably means it will struggle to beat the Cadillac squads over the course of the IMSA WeatherTech SportsCar championship this year.

Mazda withdrew its RT24-Ps from IMSA competition three races from the end of the 2017 season to give new team partner Joest Racing – replacing SpeedSource – maximum time to learn and modify the Riley/Multimatic-based cars.

However, Jarvis, who is partnering Tristan Nunez fulltime in the #77 car this year, says it’s too soon to expect Mazda to compete with the Cadillacs that dominated most of the 2017 season.

“I think we’re all dreamers and racers and we want to win,” he told Motorsport.com, “and don’t get me wrong, we want to go out there and win it and that’s the dream. But if we’re really honest with ourselves, we’re probably a year too soon. Maybe not even a year, just six months.

“While the Mazda raced last year, it’s really been the last four to six months that there’s been a huge change and that means we’re not quite as well prepared as the Cadillacs. They’ve had their car for a year, they’ve ironed out all the issues, and come here and really hit the ground running.

"To go out and win it in the first year with Joest is the goal, but it may be that step too far at the moment. That’s not to mean we won’t go out and give it our best shot.”

Jarvis, who finished a close second in the WEC LMP2 championship last year, said he was highly impressed with the P2/DPi-spec RT24-P, despite his familiarity with the breed.

“First time I got in it was at Sebring, and I got out with a smile on my face because it’s a really good car, it handles well,” he said. “Like any car, if you take it to the limit it has some balance issues, but if it didn’t, you weren’t driving hard enough.

“But basically the car’s fantastic and the job they’ve done in the last six months is incredible because I think they’re three seconds faster here than they were this time last year. Some of that is engine development but a lot of it is corners – and that’s on a track where there aren’t that many corners.

“It’s been an incredible step forward. So I’m really, really pleased so far.”

Jarvis, who has scored podiums in the Le Mans 24 Hours driving Joest-run Audis, said that familiarity had eased his switch to a new environment, and the same applied for Harry Tincknell, who is partnering Jonathan Bomarito in the #55 car.

“It’s certainly nice when you join a team and you know 95 percent of the team already,” said Jarvis. “I’ve spent a long time working with Joest – I know how they work, they know how I work. It’s been a really easy transition.

Regarding Mazda’s prospects in the Rolex 24, Jarvis said: “We’re certainly in the mix – although I think the Caddys and the Acuras are very strong, and to be fair the Orecas are there too.

“But we’ve also had to miss sessions with both cars due to issues and that’s probably the biggest concern heading into the race – having a trouble-free race. If you have a trouble-free race, you can worry about your position after.”