JERSEY – WEC class winner James Walker will drive the Fall-Line Motorsports Audi R8 LMS in the 2014 Rolex 24 event at Daytona. The 30 year-old will partner 2013 Daytona class winner Oliver Jarvis. It will be Walker’s first competitive drive in an Audi R8 LMS, having twice previously competed in the 24-hour race in a Porsche.

“It’s great to be partnering Oliver Jarvis at Daytona,” says Walker. “I raced against him in both British Formula Ford and British Formula 3. With his Audi experience he's the perfect team mate - I'm sure I'll be able to learn a lot about this year’s Audi R8 LMS from him.”

Walker joins the already confirmed Fall-Line line-up of Daytona regulars Charlie Putman and Charles Espenlaub to race in the R8 LMS for the 2014 season. Both drivers competed extensively in the USA and Europe in 2013, including at the Blancpain and British GT Championships. 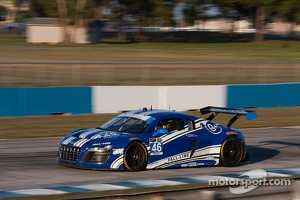 The Daytona race, held on the 25th-26th January, marks the beginning of the sports car racing season, and this year the event not only kicks off the North American Endurance Championship, but also the first battle for the TUDOR United SportsCar Championship title. The deal with Fall-Line was only confirmed on Christmas Day, rounding-off an excellent year for Walker, which included outings in British GT and a World Endurance Championship class victory at Silverstone.

“It was a great surprise. I'm really looking forward to getting to grips with the Audi R8 LMS. Audi had an exceptional Daytona last year so I'm sure they will be doing everything they can to secure back-to-back victories,” says Walker, “The team has already tested at Daytona in November and I will be in the car for the next test, starting on January 3rd. Having driven a wide range of GT machinery in the last 3 years, I’m sure I’ll get up to speed with the R8 LMS quickly and I’m looking forward to working with Charlie, Charles and the rest of the Fall-Line team.”

Fall-Line Team Manager, Michael Harvey says, “We are extremely excited to have James join Fall-Line Motorsports for Daytona. With his proven speed and understanding of how to win endurance events, he was the perfect complement to our line up and he adds strength to both Fall-Line and Audi's quest to repeat at Daytona.”

Whilst relatively new to the Audi R8 LMS, having only started racing it in the middle of last season, Fall-Line Motorsports is established as a leading builder and fabricator of race cars for all levels of competition.

“Even though we came together a little later than expected, I have no doubt James will get up to speed quickly and with the added assistance of Charlie, Charles and Oliver, all of whom have extensive experience at Daytona in the R8 LMS, I expect his introduction to be seamless,” concludes Harvey.