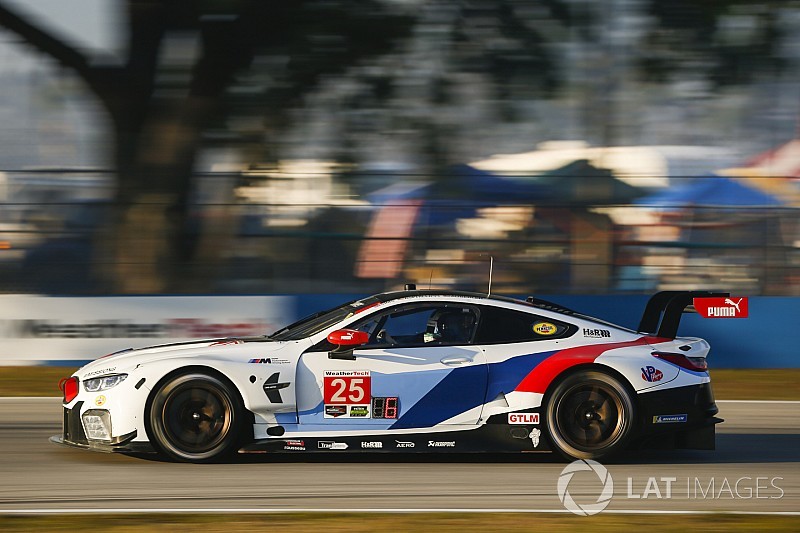 Following the M8's pole position and runner-up finish in the Sebring 12 Hours, BMW boss Jens Marquardt says IMSA’s Balance of Performance for GT Le Mans is now better than in the season-opening Rolex 24.

By contrast, at the opening round of the IMSA WeatherTech SportsCar Championship, the Rolex 24 at Daytona, the BMWs qualified eighth and ninth in class and even before hitting trouble, offered no opposition to the victorious Ford GTs.

Since Daytona, however, the BMW has been granted a boost increase to its twin-turbo 4-liter V8, it has lost 44lbs (20kg) of weight and its fuel capacity has been increased by two liters – changes that Marquardt unsurprisingly endorses.

He said: “We have seen another exciting and extremely tough 12-hour race here at Sebring – and we can take many positives back home. Congratulations to BMW Team RLL and our BMW Motorsport crew on the maiden podium finish for our new BMW M8 GTE.

“Far more important than the result are two other findings. On the one hand, the BMW M8 GTE was able to show its potential, which is underlined by the fact we recorded pole position and the fastest race lap.

“On the other hand, the GTLM field was far better balanced than it was at Daytona. The fans saw a thrilling race with close battles and excitement to the very last lap. This is what we all want. We are now looking forward to the upcoming races.”

Aside from a brake change during a caution period that saw the #25 BMW just fail to exit the pits in time to avoid going down a lap, the team encountered no major hitches and smart strategy got the team back on the lead lap, and into the top group.

Sims then took the fight to Tandy after the final two restarts, only falling away in the final 30 minutes.

Meanwhile, the #24 BMW of Jesse Krohn, Nicky Catsburg and John Edwards retired in the final hour but had claimed fastest GTLM lap of the race as early as the opening hour.

“After Daytona, this has been a much more competitive race for us,” said team co-owner Bobby Rahal. “Naturally when you are that close you are disappointed not to win. But if you look at the big picture, we made a lot of progress.

“It’s been a lot of hard work put in by a lot of people. I’m just pleased we are able to bring home a second place. This is a pretty good Sebring.”

De Phillippi said: “This whole weekend has been super memorable for me: first pole as a BMW works driver, and our first podium position for the new BMW M8 GTE. I’m very proud of the guys. They deserve this one.”

“It was very nice to be in the hunt for the win,” added Sims. “The fight with Nick Tandy was fun. Ultimately they turned on the pace a lot in the last stint, so I couldn’t catch him really. Second place is pretty good.

“The BMW M8 GTE was working well, BMW Team RLL did a great job. We are in the mix now.”