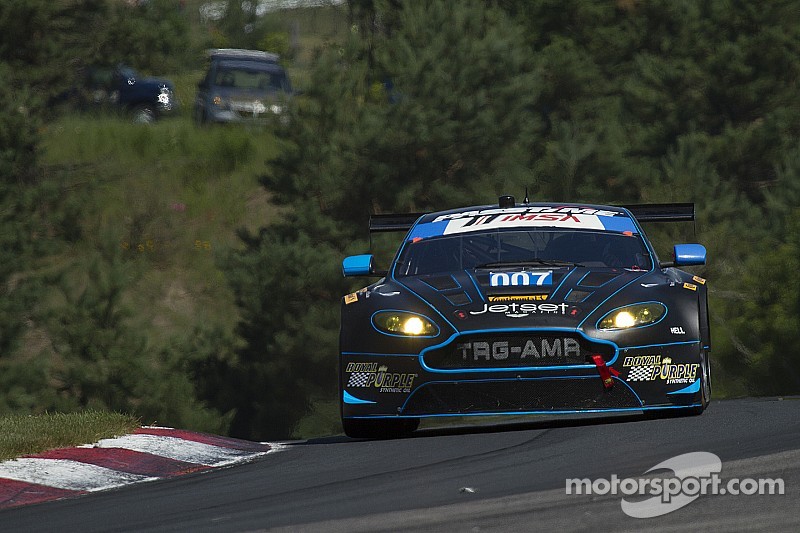 Sunday was a mixed bag for pole-position winners of the Continental Tire Road Race Showcase at Road America.

The top qualifiers from two of the four classes in the TUDOR United SportsCar Championship had their hopes of a victory dashed either before the race had begun or within the first seven minutes of the two-hour, 45-minute event.

The other two pole winners were more fortunate, though one more so than the other.

Disappointment first struck the No. 007 TRG-AMR Aston Martin V12 Vantage (in photo), which James Davison had put on the GT Daytona (GTD) class pole. In the waning minutes of Sunday morning’s warm-up, Davison was involved in a two-car incident in Turn 11. Davison’s car hit the barrier hard, sustained heavy damage and was not able to make the race.

Then, in the sixth minute, the top Prototype Challenge (PC) car, the No. 09 RSR Racing ORECA FLM09 driven by Duncan Ende, was involved in a multi-car mishap at turn 12. The car, which co-driver Bruno Junqueira had put on the pole Saturday, was done for the afternoon.

John Edwards, who began the race behind the wheel, got caught up in the same incident that knocked out Ende.

“There was debris (on the track) and (safety) tires were rolling across the track,” said Edwards, who pitted for tires while his team taped up the front-left of his car.

Edwards also ceded the wheel to co-driver Dirk Mueller, who salvaged the weekend with an impressive second-place finish.

“My stint was good,” Dalziel said. “To be honest, Scott’s stint was awesome. He put us in a good position. This is frustrating. I feel like we did everything perfect as a team. We executed every pit stop and strategy. The Honda HPD was fast, but the restarts are killing us. There is nothing else we can do. We go one way, they go the other way and they pass us before the brake zone.”

Leaving Road America on a low

The weekend began with Pla, in the No. 42 OAK Racing Morgan Nissan, among the fastest drivers during Friday’s practice, posting the quickest lap four times before being bested by a competitor.

On Saturday, Yacaman crashed into the tires in Turn 12 during the first practice session, but the team rebounded later in the day and qualified third for Sunday’s race.

Then it all went wrong.

During Sunday morning’s warm-up, Yacaman had an off-course excursion and brushed a barrier near Turn 8.

And, while running seventh with 30 minutes remaining in the race, Pla was hit from behind and knocked off the track in Turn 3. Yacaman and Pla wound up finishing 11th in the Prototype class and 42nd overall.

A total of 48 cars started and only seven were not running at the finish. … Twenty-five cars completed 61 laps. … The TUDOR United SportsCar Championship next visits Virginia International Raceway the weekend of August 22-24.