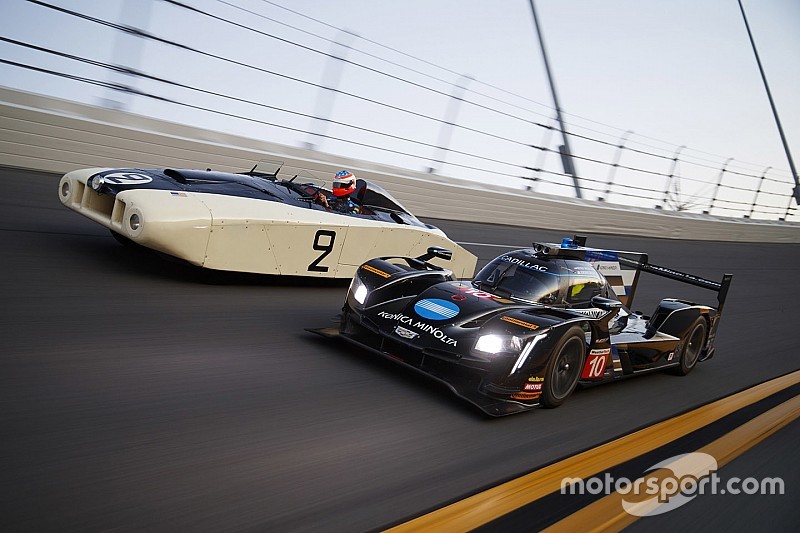 Jordan Taylor, who won this year’s IMSA WeatherTech SportsCar Championship in a Cadillac DPi-V.R had the rare chance to try out the brand’s legendary 1950 Le Mans entry at Daytona International Speedway this week.

Taylor, along with brother Ricky, took five wins in the Wayne Taylor Racing Cadillac, to beat Action Express Racing’s two-Cadillac team to the Drivers’ crown in the Prototype class, in IMSA’s initial season of DPi/P2 rules.

To celebrate the achievement, a photoshoot was arranged thanks to the Revs Institute in Naples, Fla., whereby Jordan Taylor got to drive the striking 1950 Cadillac Series 61 racecar from the Collier Collection.

For his entry into Le Mans in 1950, the legendary Briggs Cunningham bought two regular Cadillac Coupe DeVille Series 61s, powered by the 331cu.in. (5.4-liter) overhead valve V8 and pushing out approximately 160hp at 3800rpm. He kept one relatively stock, but the other was given a super-low-profile aluminum body, crafted by Grumman Aircraft, to maximize the car’s straightline performance. This was vitally important for the infamous Mulsanne Straight, which comprised 3.7 miles of the Circuit de La Sarthe’s 8.384-mile total, and along which this car could reach 130mph – around 15mph faster than its standard-bodied counterpart.

The French media gave the dramatic-looking Cunningham/Phil Walters-driven car the excellent soubriquet “Le Monstre”, but it showed promise and finished 11th, despite losing 15mins on Lap 2 when Cunningham spun it into a sandbank, and despite getting jammed in top gear for most of the race.

Taylor, after completing four laps of Daytona in the 67-year-old car, commented: “Besides trying to learn a three-speed column shift, I had to turn the steering wheel past 90 degrees to get it to turn. Combine that with the car weighing 3700lbs and on skinny tires… it was a handful. The guys from the Collier Collection didn't have any hesitation about the speeds we were going, it was amazing!

"On the first lap going into the Bus Stop chicane, I went for the brake, and I am not sure I've ever driven anything with full drum brakes before.

“When I got up high onto the banking, I looked left at the DPi-V.R on the inside and felt like I was going to fall out of the car. The relative lack of safety back then, and lack of support around the driver, were crazy feelings. You don't get the sensation of how steep the Daytona banking is in the Cadillac DPi-V.R at over 170mph. I couldn't imagine what it was like doing over 130mph down Mulsanne, lap after lap for 24 hours.

“It was a great experience to be able to drive a car with such a great Cadillac history."