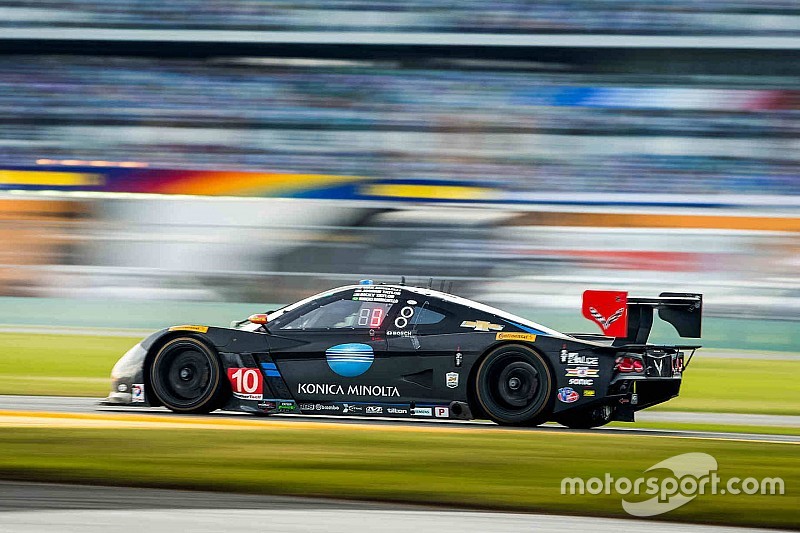 If anyone thought the lead fight was purely a matter of ESM surviving, think again…

When Pipo Derani pitted the #2 Ligier-Honda and handed over to Johannes van Overbeek he did it without losing the lead as Angelelli also pitted the Wayne Taylor Racing Corvette DP.

However, Angelelli then went on a charge and carved the lead down to 5sec with 4h30m remaining. Twenty minutes later, the #10 was close enough to pounce as Overbeek hesitated in traffic, and WTR was into the lead.

JvO was then able to keep pace with Angelelli but had made no real thrust for the lead by the time the race entered its 21st hour.

Meanwhile Albuquerque moved into third in the #5 Action Express Corvette as Dalziel handed the Visit Florida car back to Marc Goossens. The only other Prototype action of note was Tony Kanaan'a #02 Riley Ford tangling with a GTD Audi. Both were able to continue without causing a caution.

Marcel Fassler maintained the lead of GTLM for the #4 Corvette Racing C7.R with its sister car in second ahead of Dirk Werner’s #25 BMW M6 and Alessandro Pier Guidi in the Scuderia Corsa Ferrari 488.

The JDC Miller #85 car’s lead in PC was slashed to… seven laps a couple hours ago as it required a toelink change but it has held on to its advamtage over Jose Gutierrez in the #52 PR1/Mathiasen machine.

Shane Van Gisbergen kept Alex Job in the lead of GTD, still ahead of Marco Seefried, with Markus Palttala third in the #97 Turner Motorsport BMW M6.

The hour closed with a full course yellow for the #67 Ford GT broken down on track and debris having flown off the #28 Lamborghini. This triggered another round of pit stops.

DeltaWing: Three times in P1 position and an unavoidable crash