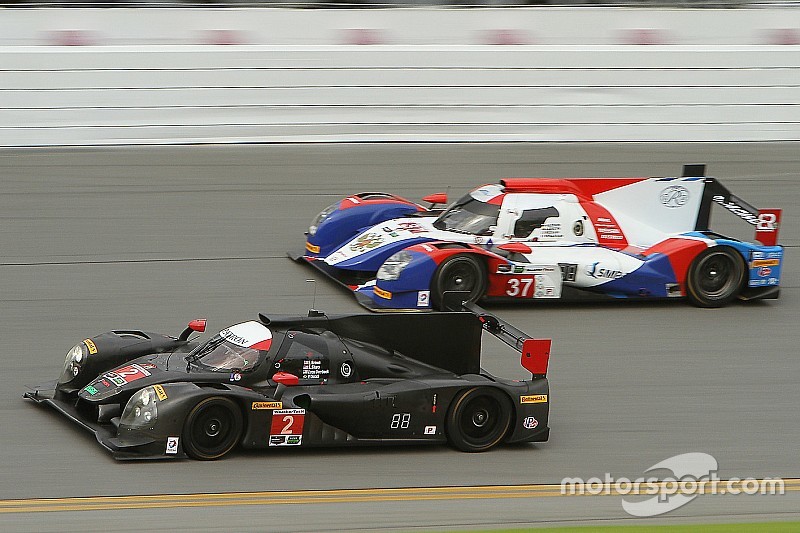 Daytona Beach, Fla.  – Luis Felipe “Pipo” Derani made a good first impression at Daytona International Speedway on Sunday, running the fastest lap of the three-day Roar Before the Rolex 24 At Daytona test, the opening event on the 2016 IMSA WeatherTech SportsCar Championship schedule.

Derani turned a lap of 1:39.249 (129.130 mph) in the No. 2 Tequila Patrón ESM Ligier JS P2 co-driven by Scott Sharp, Ed Brown and Johannes van Overbeek. The 22-year-old Brazilian knocked the similar No. 60 Honda-powered Ligier JS P2 of Ozz Negri, John Pew and AJ Allmendinger from the top after the Michael Shank Racing with Curb/Agajanian trio led much of the three-day test.

“I really did not expect be here (atop the speed chart),” Derani said. “This is my first time at Daytona, and it’s a unique place with a lot of history. It’s a pleasure to be part of this event for the first time. This is my first time doing sports car racing in the U.S., and I’m having fun.”

In Continental Tire SportsCar Challenge practice, Danny Burkett ran the fastest lap of the weekend with a lap of 1:57.430 (109.137 mph) in the No. 33 CJ Wilson Racing Porsche Cayman GT4 Clubsport. Burkett and regular co-driver Marc Miller were joined by car owner C.J. Wilson in both Grand Sport (GS) sessions on Sunday. Eric Foss was fastest in Street Tuner (ST), running 2:05.688 in the No. 56 Murillo Racing Porsche Cayman.

SMP Racing is partnering with AF Corse in the American debut of the No. 37 BR01, a Paolo Catone-designed LM P2 Prototype that debuted in 2015 and finished sixth in its second race, the 24 Hours of Le Mans. Nicolas Minassian and Maurizio Mediani, the 2014 FIA World Endurance Championship (WEC) P2 titlists, will co-drive with Russians Mikhail Aleshin and Kirill Ladygin.

“The car is a year old, and we starting to get on top of it,” said Minassian, a two-time podium finisher in the 24 Hours of Le Mans. “We understand the car very well now. This is our first time with the Continental tires, and we’re searching for the right setup. We’re running very well right now. This is our first time here with the car, but the team is very fired up. We’re going to give it our best. In the back of our head you always want to win. It’s a long race, and anything can happen. We’ve got a good crew, and all the team has lots of experience. I’m expecting us to be at the front.”

Chip Ganassi always has had a knack for delivering surprises. Ganassi did it again with the driver lineup for the No. 01 Ford EcoBoost Riley DP Ganassi, which includes Austria’s Alex Wurz, who announced his retirement last year.

“Chip asked me if I’m happy to do this race, and I told him that I was delighted,” said Wurz. “It’s a cool car, an amazing team and a great organization. I’m happy to be here.”

Wurz, who competed in Formula 1 between 1997 and 2007, most recently drove Toyota’s P1 in WEC competition prior to his retirement.

How did he end up in another ride so soon? Apparently there was a plan all along.

“I always had Daytona on the list,” Wurz said. “I have interviews that go back about 15 years where I said how much I would like to race in the States and at Daytona. So I had to retire to have the time to do it because it always clashed with my factory contracts.”

Racing in America seems to be living up to Wurz’s expectations, as he has been impressed during his short time at Daytona International Speedway.

“I’m taking it all in,” he said. “Already, coming here and seeing the grandstands, so big and massive. The track, Daytona, for us Europeans it’s such a cool name. A lot of history here, that’s cool.”

BMW Team RLL brought a pair of brand-new BMW M6 GTLMs to the Roar, and have been at or near the top of the GTLM speed charts throughout the three-day event.

“This is a work in progress, but we’ve been getting better every day,” said Bill Auberlen, who shares the No. 25 IHG Rewards Club BMW M6 GTLM with Dirk Werner, Augusto Farfus and Bruno Spengler.

“This was (BMW Motorsport Director) Jens Marquardt’s idea, and he’s implemented everything we’ve needed to make it a competitive car,” Auberlen said. “They’re working tirelessly to make it as good as can be.”

Davis Up To Speed In Stevenson Audi

Fresh off of a Grand Sport (GS) championship in the Continental Tire SportsCar Challenge, Stevenson Motorsports’ Andrew Davis is looking forward to the 2016 season.

“We’re stepping back up into the big show after two great seasons with the Continental Tire Challenge,” Davis said. “We’re really happy to be back to the WeatherTech Championship.”

At the Roar Before the Rolex 24, Davis joined Stevenson Motorsports teammates Robin Liddell, Matt Bell and Lawson Aschenbach in the No. 6 Audi R8 LMS GT3, which is brand new to the team.

“We’re working through the procedures of learning the car,” Davis reported. “With the No. 6, literally, the first wheel turned in its life was here three days ago. We have all this test time, so now we’re gathering data and getting the time in for all of our drivers.”

The team was successful, landing their R8 third-fastest in GT Daytona at the end of the weekend with a 1:47.949.

“We’ve got a very experienced group and we’re working together and with our new engineers to maximize performance,” said Davis. “So far it’s been really great; the car is a dream to drive. The performance is very impressive. We’re loving it at this point.”

PR1/Mathiasen Motorsports On Pace In Bid To Repeat In PC

One year ago, PR1/Mathiasen Motorsports scored a dramatic PC victory in the Rolex 24, taking the lead in the closing minutes of the race. The team followed up with class victories in the Mobil 1 Twelve Hours of Sebring Fueled by Fresh From Florida and Petit Le Mans powered by Mazda – in addition to the sprint race at Lime Rock Park – capturing the Tequila Patrón North American Endurance Cup.

Tom Kimber-Smith returns to the No. 52 Precision Security Consultants/Prisma/Vista Del Mar ORECA FLM09 with the same goal with a new set of co-drivers, Robert Alon, Jose Gutierrez and Nicholas Boulle.

“It’s great to be back with the same team with new co-drivers,” Kimber-Smith said. “My three teammates are all rookies, but throughout the three-day test they haven’t done anything wrong and we seem to be fairly quick. This is similar to the same boat we had with the three drivers we were with last year.

Muehlner Motorsports America – based just a few miles away from Daytona International Speedway in DeLand, Florida – made its Continental Tire SportsCar Challenge debut at the Roar and posted consistent, top-three times with the No. 21 Porsche Cayman GT4 Clubsport.

“We have three of the new Clubsports,” team owner Bernhard Muehlner said. “One is at our shop in DeLand, and the other two are in Europe [at the team’s global base in Belgium]. We can have one or both of them shipped over here very quickly if needed.

“We haven’t finalized our lineup for Daytona or the season, but Kyle is our first choice.”

Another driver testing with a new team was Trent Hindman, the 2014 GS champion, who took laps in the No. 34 Alara Motorsports Mazda MX-5 along with regular driver Christian Szymczak.

“Today was the first time I drove an MX-5, and it requires a different style from anything I’ve encountered,” Hindman said. “It’s a blast to drive, through.”

Rolex 24 weekend practice begins on Wednesday, Jan. 27, with sessions for the Continental Tire Challenge and Ferrari Challenge. Opening WeatherTech Championship practice and qualifying is on Thursday, Jan. 28. The BMW Performance 200 takes the green flag on Friday, Jan. 29, while the 54th Rolex 24 At Daytona rolls off on Saturday, Jan. 30.

Corvette Racing at Daytona: Roar Before the 24 test program complete