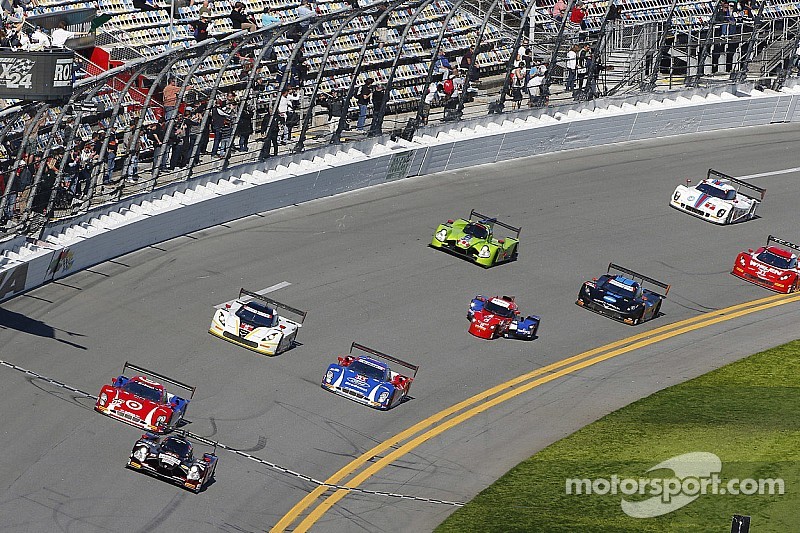 Michael Shank Racing and drivers A.J. Allmendinger, Oswaldo “Ozz” Negri, John Pew and Matt McMurry made their Honda-powered TUDOR United SportsCar Championship debut a memorable one, qualifying on the pole for the season-opening Rolex 24 at Daytona, claiming honors for the fastest race lap and challenging for the victory for the first half of the 24-hour endurance racing contest.

Negri piloted his Michael Shank Racing Ligier-Honda prototype to the pole position Thursday at Daytona International Speedway – a first for Honda in just its second Rolex 24. Negri then battled for the lead throughout the opening hours before turning the driving duties over to John Pew. At the nine-hour mark, 11 p.m. EST, the MSR effort ran third, and on the lead lap, as Allmendinger set the fast race lap to that point in the contest.

But just past 3 a.m., contact during a restart following a caution flag resulted in damage to the left front of the Ligier-Honda, and repairs put the Shank entry back in sixth position, three laps behind the leaders. Still the MSR team continued to match the leaders’ pace, despite a penalty for a pit-lane violation just past dawn, as Allmendinger bettered his previous fast lap time to 1:39.576, a mark that would hold to the checkers.

With slightly more than two hours remaining, the MSR team was forced to the garage to repair damaged suspension components, but recovered to move into sixth position in the prototype category with less than 30 minutes left. Fading oil pressure then forced driver McMurry to the sidelines in the final laps, but the team was still credited with sixth in Prototype and 11th overall in the 53-car starting field.

The Tequila Patrón ESM team debuted a pair of new HPD ARX-04b Hondas at Daytona, as Honda Performance Development follows up the highly successful ARX-03 line of open-cockpit prototypes with a new coupe design, incorporating the latest developments in safety and aerodynamics. The striking black-and-green coupes demonstrated great speed and potential, but multiple incidents combined to hobble the debut of both entries.

The #1 HPD-Honda ran in the lead group throughout the first four hours until an off-course excursion in Turn Four cost the team one lap and resulted in minor damage to the chassis floor. The ARX-04b continued to run in sixth place, and regained the lead lap in the eighth hour.

A pair of incidents just after the race reached its mid-point ended Tequila Patrón ESM’s victory chances, as a spin and stall cost the team a pair of laps and resulted in a full-course caution. On the restart, driver David Heinemeier Hansson left the circuit to avoid another car and made contact with the Turn Three tire barrier. That required taking the car to the garage for repairs, and it rejoined the race 12 laps down to the leaders.

Shortly after returning to the race, driver Ryan Dalziel was forced to return to the garage area with a damaged transmission, and the car was retired. The sister #2 HPD-Honda, unfortunately, had a brief Rolex 24. In the hands of starting driver Johannes van Overbeek, the ARX-04b lost power in the second hour of the race, forcing the team to retire the car after just 49 laps.

Allen Miller (Race Team Leader, Honda Performance Development) on Daytona qualifying: “In a lot of ways, this was a positive event for us. In just a year since our first Rolex 24 in 2014, to qualify on the pole, set the fastest race lap, and contend for the lead all marked significant advances for our sports-car program. It was disappointing not to be able to bring the new HPD ARX-04b Hondas to the finish in their first race, and for the Michael Shank Racing Ligier-Honda to have its problem in the final minutes, but the program is developing rapidly.

Tequila Patrón ESM made significant gains in speed throughout the weekend, and the MSR team was very fast and a podium contender. I’m confident we’ll see even more improvement at Sebring in March. Congratulations to Mike Shank and his entire team on an outstanding effort throughout the weekend. They worked hard and ran fast throughout the 24 hours, so it was gratifying to see them post the fastest lap of the race and finish sixth in the prototype category.”

A.J. Allmendinger (#60 Michael Shank Racing Ligier-Honda) pole qualifier, finished 6th in the prototype class: "The Honda is pretty awesome. It's one of the most fun cars I've ever driven. This is a type of car I always wanted to drive and when I saw it run, I really wanted to get in it. We had a problem right at the finish, but we were the fastest car on track. If it weren't for a couple of little things, we could’ve been easily been battling for the win. I love this race team. I've seen six or seven Honda guys at one time over here in our pit. We had a lot of support. Tire Kingdom came on board [as primary sponsor] for the first two races, so Michael Shank Racing has some momentum, I just wish we had a shot at the win today."